“Destination Moscow” is the captivating, 224 page story of Manchester United’s emotional and triumphant 2007-8 season, one which ended with them being crowned Champions of England and Kings of Europe. But it’s told in a way that no United story has ever been told before. This is a book which provides you with a punchy, rabidly red eyed review of every single match and goal, from the Reading false start to the Wigan and Moscow highs. It is an entertaining, minute by minute guide to the matches that really mattered – Liverpool, Arsenal, Barcelona, Wigan and Chelsea

It contains all the season’s best quotes from Ferguson and Crerand to the dreaded Scousers. And, uniquely, it also contains a round up of all the news, jokes, gossip and rumours affecting both United and our fiercest rivals between matches. 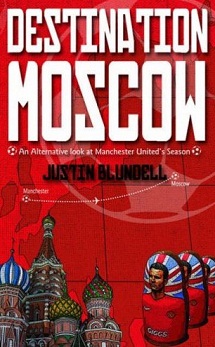 Most season reviews follow the same old blueprint of stats and dry match reports. “Destination Moscow” is a book for everyone who lives and breathes United, not just on match day but every single day. This is the latest title from the author of “Back from the Brink”, which was praised on release as ‘a finely crafted, insightful piece of history’ . It is an irreverent ‘Red eyed’ review of Manchester United’s spectacular season.

One reviewer simply stated that “After the unimitigated success of  ‘Back from the Brink’ , Justin Blundell has turned his biro to a more contemporary account with effortless ease. There will no doubt be a plethora of books about the second most successful season in United’s history. Most of them will inevitably be self obsessed accounts of United fans who measure their credibility by who hates Glazer the most.

Blundell refuses to get bogged down in this and instead delivers a more straightforwardly entertaining take on the season with a wicked sense of humour. This is just perfectly pitched to all kinds of United fans.

A book worth reading before the clash with Barcelona next weekend.