It was only a fleeting moment but for the first time ever there was a twinge of sadness after Manchester United finished the season on a high by defeating Blackpool 4-2 in the final Premier League match of the season at Old Trafford to clinch a record 19th title. United’s victory sent a side which has been a breath of fresh air for football crashing back to the Championship with sadly, goodness knows how many years before their presence can grace the top echelon of English football again.

It was only a fleeting moment but for the first time ever there was a twinge of sadness after Manchester United finished the season on a high by defeating Blackpool 4-2 in the final Premier League match of the season at Old Trafford to clinch a record 19th title. United’s victory sent a side which has been a breath of fresh air for football crashing back to the Championship with sadly, goodness knows how many years before their presence can grace the top echelon of English football again.

Once the post match title winning presentation commenced however, Blackpool’s despair was soon forgotten as yet another historic moment was wildly celebrated by the Old Trafford faithful – and why not? United has been consistently derided for most of the season by ‘expert’ football pundits – and frankly, many of Uniteds own fans, as being the worst title challenging side ever fielded by Sir Alex Ferguson. Yet to the surprise of them all, the title was comfortably won with nine points to spare, a full three match gap!

It’s now all systems go for Barcelona in the European Champions League Final. It will undoubtedly be a tough ask but as difficult as it may seem, a United victory will give the critics an almighty slap in the face. It must be fair to say that the 19th title could not have been brought to Old Trafford without the football genius of Sir Alex Ferguson. A fourth European Cup must therefore also be possible – because of the same genius. 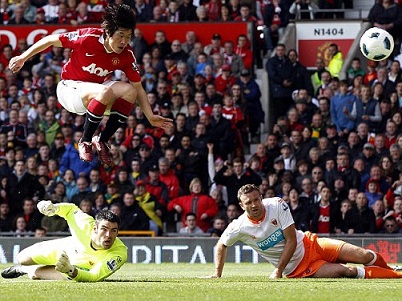 The Guardian – By the time the final blows were delivered the celebrations of Manchester United’s supporters were almost apologetic. For Blackpool, there would be no feat of escapology. Their nerve had deserted them just when they needed it the most and they will return to the Championship. It was a brutal, desperately cruel, way to go. Ian Holloway’s side had come back from a goal down to put themselves on the cusp of becoming the first side to beat the champions at Old Trafford this season. The problem was that when Gary Taylor-Fletcher turned the past ball Edwin van der Sar to make it 2-1 there was still more than half an hour to play.

Anderson’s equaliser six minutes later seemed to drain the players in tangerine of their self-belief. They lost their shape and, perhaps more dangerously, their direction. After 74 minutes, Ian Evatt turned an innocuous cross into his own net and, suddenly, the game had been turned upside down. Then the death knell sounded for real, Michael Owen running clear to score what was probably his farewell goal to Old Trafford Full Report 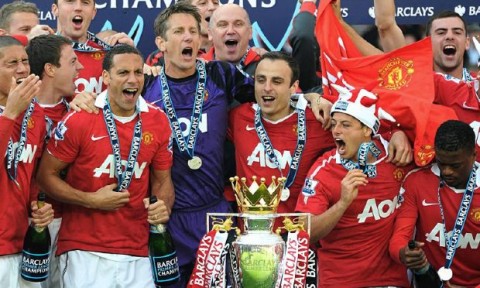 Blackpool Gazette – Blackpool manager Ian Holloway paid tribute to the performance his players gave at Old Trafford as they lost their battle to stay in the Barclays Premier League with a 4-2 defeat to champions Manchester United. Charlie Adam and Gary Taylor-Fletcher had scored either side of the break to put the Seasiders in front after Park Ji-sung’s first-half strike.

At that point, Holloway’s men were clear of the drop zone, but Anderson then equalised and Ian Evatt turned Chris Smalling’s cross into his own net before Michael Owen kicked them back into the Championship Full Report

Manchester Evening News – It was fanfares and farewells at Old Trafford as the Champions showed just why they have fought off the challenge from elsewhere and retained their crown. It was a home goodbye to Edwin Van der Sar and, who knows, it could yet have been Paul Scholes’ Premier League tara on his home soil. Michael Owen might also be wondering if he’s played his last Old Trafford match for the Reds.

That trio were able to enjoy this occasion no matter what happens but for Owen Hargreaves his Carrington training ground locker had already been cleared out and wasn’t at the crowning of the title winners. The midfielder who has suffered a torrid time in his United career battling against the chronic knee tendinitis, and subsequent niggling injuries has been told he won’t have the chance of extending his stay on a pay-as-you-play deal and will have to try and resurrect his career away from Manchester Full Report

Did any title mean more to you than the 19th – except possibly Fergies first in ’93?

Written by Frank Scicluna
Red Dead Podcast 3 – 19, Morrison and the CL Final
Book Review: A look back to 'Destination Moscow'