The dream proved to be one step too far! When Nemanja Vidic led Manchester United onto the Wembley pitch to face Barcelona on Saturday, he must have been visualising himself lifting The Champions League trophy for his side a few hours later, but it was not meant to be. The brilliant Catalans made sure of it. It was a dream that the big Serbian had been having for months, one that must now wait for at least another season but there’s little doubt that the man known as Vida has not given up on it. His inbuilt determination absolutely assures it.

Born in Titovo, Serbia in 1981, Vidic began playing football at the age of just seven and was quickly spotted by local clubs. At the age of 15, he was signed to Red Star Belgrade’s youth system and by the age of 20 had won the Yugoslav Cup with Red Star. The captain’s armband soon followed and he became an integral part of the Red Star team, leading them to a domestic double in 2004. That was to be his last season with the club as he moved to the Russian Premier League and Spartak Moscow in a reportedly record breaking transfer deal. 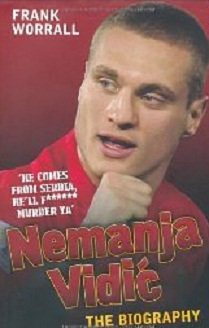 This 288 page biography by Frank Worrall published in 2010 reveals that Vida’s outstanding play and no nonsense style soon attracted the attention of foreign clubs and in 2006 he signed for Manchester United – two years after the club had first expressed an interest in him. Slotting neatly into central defence alongside Rio Ferdinand, Vida began a defensive partnership that has proved to be one of the most formidable in English football.

Establishing himself as a vital part of the United setup, Vida picked up a Premier League winner’s medal in 2007, another in 2008 and was part of the squad that won the 2008 Champions League. He played in every one of United’s record breaking run of 14 clean sheets in 2008/9 and helped the team to victory in the Club World Cup, before finishing the season with more glory as United won their 18th League title. His fourth Premier League winners medal was added to his collection just last week.

He’s loved by the Old Trafford faithful for his aggressive defensive style and his ability to score goals from set pieces. Vidic was short listed for the PFA Player of the Year in 2009 and again this season. He was named the Barclays Player of the Season in both 2009 and 2011. This is the incredible story of a player renowned as one of the best defenders in Europe, if not the world.

Is there a better central defender in the Premier League than Vidic?

3 thoughts on “Book Review: The Vidic dream lives on”