It cannot possibly be denied! Barcelona has proved once again that they are simply the best club side in the world. The look on Sir Alex Fergusons face at the trophy presentation after the game said it all after the Catalans clinically brushed Manchester United aside with an emphatic 3-1 victory at Wembley

It cannot possibly be denied! Barcelona has proved once again that they are simply the best club side in the world. The look on Sir Alex Fergusons face at the trophy presentation after the game said it all after the Catalans clinically brushed Manchester United aside with an emphatic 3-1 victory at Wembley. He knew, as we all did, that his team was beaten by a better side. The biggest compliment I can possibly pay Barca is that as a dedicated, passionate United fan, I am obviously disappointed by such a resounding defeat but far from devastated. Tribute must simply be paid to a wonderful Barcelona side – and what can any more be said about Lionel Messi?

Ferguson had no hesitation in admitting that “We were beaten, there is no other way to address the situation, by the best team. I expected us to do better but at the end of the day we were beaten by the better team. They are the best team we have ever played, they are at the peak of their cycle. There was good evidence we are a consistently good European team” he continued “but we were beaten by the best team in Europe and there is no shame in that. Sometimes you come up against a far better team and tonight was one of those nights. We expected to do better, simple as that. We have had a great season in many ways, it is just disappointing that we have been to Wembley twice and been beaten. We are just disappointed it has ended on this note”

No need to be disappointed about anything Sir Alex. 2010-11 has been a wonderful season for Manchester United and its fans, a record 19 titles is proof of it.

One final thought which is admittedly self indulgent. Anfield fans can wipe the smiles off their faces, the huge smirks which can be sensed after this United defeat. The undeniable truth is that Liverpool has never, ever, in four of their European Cup wins last century had to face a team like this Barcelona. 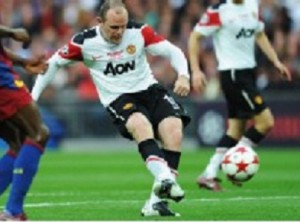 manutd.com – Sometimes you just have to hold your hands up and admit defeat. The Reds could hardly have prepared better, and even dominated the game’s early stages, but at Wembley on Saturday night Barcelona proved why so many regard them as the best footballing team on the planet. They’re certainly champions of Europe. That much is certain now. Not even Wayne Rooney’s first half equaliser after Pedro had put the Spanish side ahead, blunted their relentless passing game for long.

There can be no shame in defeat. Not to this Barcelona side, a group of players that will surely go down as one of the most talented sides ever assembled. This is a team that boasts, arguably, three of the best five players in the world, a side that battered Real Madrid 5-0 earlier this season in a performance that prompted Rooney to stand and applaud in his own living room.

Perhaps in years to come Rooney will admire Barcelona’s performance in this match, too. At Wembley on Saturday there was only disappointment, punctuated briefly when he curled home from 15 yards to ignite hope. After that, though, Rooney, like most of his team-mates, struggled to make an impact.

Just as in Rome two years ago, the Reds started brightly and spent the majority of the opening 10 minutes in the Barcelona half. United’s midfield made early challenges and pressed high up the pitch, with Ji-sung Park and Michael Carrick proving particularly effective at disrupting the Catalans’ rhythm.

Barcelona almost appeared shell shocked. The Spanish champions were uncharacteristically wasteful in possession – even Lionel Messi and were nervy at the back. It wasn’t until the 16th minute, when Pedro ghosted in front of Rio Ferdinand at the near post to poke wide from Sergio Busquet’s right-wing centre, that Barcelona showed any signs of settling.

Messi’s first flash of magic arrived shortly afterwards, although his pass at the end of a mazy dribble was slightly over-hit and Reds skipper Nemanja Vidic booted the ball to safety. David Villa flashed a long-range shot wide of Edwin van der Sar’s left-hand post and then, a minute later, forced a smart save from the Dutchman as Barcelona began to take control. Vidic then showed why he’s ranked amongst the best defenders in the world, stretching out a long leg to halt another Messi run inside the penalty area, but it was further proof that United’s grip on the game was slipping.

And then Barcelona struck. Playmaker Xavi burst forward, drew two defenders and slipped the ball to Pedro on his outside. Vidic couldn’t reach him quick enough and the 23-year-old kept his cool to beat van der Sar at the near post. The Reds stopper, playing in his fifth Champions League final and his last ever professional game, will have been disappointed with the concession and United minds must have rolled back to 2009. Then, after scoring first, the Spaniards held onto the ball superbly and barely gave United a kick.

Lessons were learned that night, though, and within seven minutes at Wembley the Reds were back on level terms. It was Rooney, at the end of a tumultuous season both on and off the pitch, who found the net and dragged United back into the game, exchanging passes with both Carrick and Giggs before curling the ball past Victor Valdes from 15 yards.

There was elegance in the move and grace in the finish – proof that Barcelona aren’t the only side who can do justice to the beautiful game. And although Andres Iniesta tried his luck from distance and Messi was mere inches from Villa’s cross on the stroke of half-time, Sir Alex’s men went into the break at 1-1.

Barcelona remained in the ascendancy when the second period began. Xavi twice found space on the edge of the area to shoot, only to be denied by blocks from Vidic and Carrick, while Dani Alves blasted at van der Sar after finding space down the right; Messi’s follow-up was headed clear by Patrice Evra.

A minute later, Messi restored the Catalans’ advantage, stroking the ball home from 20 yards. Nobody was surprised the ball found the net – it was his 12th goal in 13 Champions League games this season – but even the Argentina star must have have raised an eyebrow or two at the amount of space he was afforded. There was no United player within five yards of the Barcelona no.10 when he received the ball. Evra and Vidic made tentative moves toward him, but by the time either had committed themselves, Messi had advanced and picked his spot, guiding the ball past van der Sar from 20 yards.

At the other end, United struggled to involve Javier Hernandez, a player who so much seemed to rest upon before kick-off. The Mexican was often isolated, or caught offside – certainly, opportunities for him to unsettle Barcelona with his blistering pace were few and far between.

A cheeky Messi flick was cleared off the line by Fabio just after the hour-mark, before Xavi and Iniesta drew smart stops from van der Sar. Barcelona’s killer third goal arrived on 69 minutes and in spectacular fashion. Again Messi was the architecht, wriggling his way into the area and drawing defenders like bees to honey. The Reds did nick the ball, but only briefly. When it was rolled back to David Villa on the edge of the area, he took one touch to trap it dead before his second delivered the killer blow. With minimum backlift he achieved maximum impact, curling the ball sumptuously into the top corner.

That was that. There was no coming back from there. Not from 3-1 down. Not against Barcelona. Just as in 2009, United will have to settle for being champions of England and runners up to the best team on this planet or another.

Can anyone have any complaints about Barcelona winning of the Champions League?

Written by Frank Scicluna
Book Review: The Vidic dream lives on
No one can dare be critical of United 2011