“My toughest opponent? Scholes of Manchester United. He is the complete midfielder. Scholes is undoubtedly the greatest midfielder of his generation.” Zinedine Zidane

It was hardly unexpected, but still a sad farewell! Manchester United midfielder Paul Scholes has announced his retirement from football but I still would love to have seen him give his farewell to Old Trafford after the Blackpool game a week ago. The midfield maestro has been one of the most respected players in world football over the past 15 years. Perhaps the most meaningful compliments for the Salford born hero are those which come from his own peers. Some of the biggest names in world football – past and present, who have been emphatic in their praise for him.

“Good enough to play for Brazil. I love to watch Scholes, to see him pass, the boy with the red hair and the red shirt” Brazilian legend Socrates

“My toughest opponent? Scholes of  Manchester United. He is the complete midfielder. Scholes is undoubtedly the greatest midfielder of his generation.” Zinedine Zidane 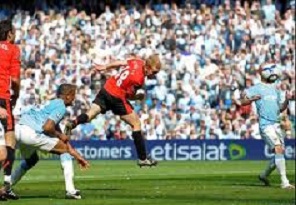 “Paul Scholes would have been one of my first choices for putting together a great team – that goes to show how highly I have always rated him. An all round midfielder who possess quality and character in abundance.” Italy World Cup winning manager Marcello Lippi

“I tell anyone who asks me – Scholes is the best English player.” France world cup winner and former Scholes team mate Laurent Blanc

“Many great players have worn the shirt of Manchester United. Players I worshipped, then lost with my youth in Munich. Players like Denis Law and George Best who I enjoyed so much as team-mates and now, finally, players I have watched closely in the Alex Ferguson era. And in so many ways Scholes is my favourite.” Sir Bobby Charlton

“In the last 15 to 20 years the best central midfielder that I have seen – the most complete – is Scholes. I have spoken with Xabi Alonso about this many times. Scholes is a spectacular player who has everything.” said Barcelona World Cup winner Xavi

“The best player of his generation, loved every minute of playing football with him, a legend.” Rio Ferdinand on Twitter on Tuesday morning.

Farewell to a true Manchester United and football legend