Any defeat is difficult to live with for football fans but when it comes in a European Champions League final it can be devastating. Comments posted on the  manutd.com official message board however were both gracious and grateful after witnessing United’s 1-3 defeat by Barcelona. Most took off their hats to United’s conquerors at Wembley while at the same time showing their gratitude to Sir Alex Ferguson and his players for another exciting season. Truly Reds brought you Ferguson’s thoughts on that defeat and now brings you a selection of comments from fans just like you and me.

candy_22 – “At this point in time no one is hurting more than the players themselves. We were outplayed by a great Barcelona side. End of. The defeat should not take away the fact that this same team made history in England by winning a 19th league title. Get behind the players and appreciate the fact they at least got to the final and gave their all. Thanks to the players and manager for a great season. United till I die!” 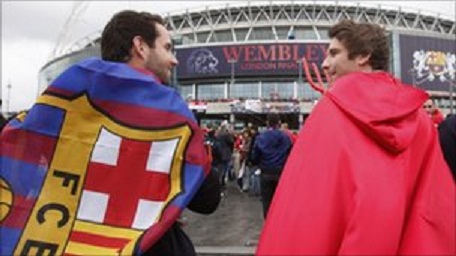 Natedogg – “The journey home from London was pretty depressing and I did a lot of soul searching on the train. You have to give credit to Barcelona, they were very good.

On our side, the first half was good – Park’s closing down was brilliant. After that, the second goal killed us and we kept giving the ball away cheaply which was very disappointing. I think our main problem is dominating possession against the big clubs and it will be interesting to see what Sir Alex does [about this] in the summer.

Fair play to the lads, even at 3-1 down they kept going and they can hold their heads high. Cheer up guys… as people on the train reminded me, at least we won the title.”

Bevninja – “I left the pub early, I couldn’t stand to watch any more. But we just have to hold our hands up and say we were just not good enough. As a football fan I’ve got to admit Barcelona’s way of playing the game is pretty awesome. Iniesta, Xavi, Messi… they just don’t let you have the ball. It’s hard to bear and disappointing beyond belief, but that’s the way it is. We’ve just got to dust ourselves off and start again next season. Red forever.”

amfika – “I think this defeat is even more painful because we will not see Edwin van der Sar in our shirt again. We must thank him for his contribution to our successes over the last six years. We will miss him. He is a legend.”

alex swee – “Congrats to Barcelona. The best team in the history of football.”

sensualriya – “Sir Alex, you made a vow to knock Liverpool off their perch and you certainly achieved that. Now it’s time to make another vow – to knock Barcelona off theirs and bring back that trophy to Old Trafford.”

dan87 – “I can see a team like Man City or Chelsea pulling out a surprise, roughing Barcelona up and knocking them out next season. The idea this Barcelona team will dominate is premature.”

AidanNelson2009 – “Well at least we won the 19th title, something to be proud of. It was a good season, but we are nowhere near as good as Barcelona at the moment.”

Mauritian red-devils – “It’s not a shame to lose to the best team. Defeat is part of life, and we should accept it humbly. Manchester United will never die. We’ll come back from this.”

Ziggy the red – “We need to get a sense of perspective. You’ve just got to admit we were beaten by a better side. Barcelona are brilliant. But I’ll be United till I die.”

Alex Lee – “The truth is the result would have been the same no matter what formation we could have used, maybe except for 5-5-0 and play for penalties! I’m happy that Sir Alex put our team out to attack rather than try to crowd out the midfield, even if Barcelona taught us a footballing lesson.”

BdRed – “A heartbreaking finale. Still a very good season nevertheless. Congratulations to everyone involved. We’ll come back stronger next year.”

And perhaps one of the most thoughtful was sent in by Jason Fonseca – “We were defeated by a more than outstanding performance from Barcelona last night. As the manutd.com match report says ‘And yet there can be no shame in defeat. Not to this Barcelona side, a group of players that will surely go down as one of the most talented sides ever assembled.’

I think exactly the same. We lost playing the way United know best – trying to control the ball and attack, at least in the first ten minutes or whenever it was possible. I am very proud of all the players – although we were outplayed by a mile, they still showed commitment and desire. At least, that was my impression. If some players didn’t perform or made too many mistakes is irrelevant now. Barcelona were totally superior to United and there’s nothing we can do about it by. We will bounce back as we always do. That’s the United spirit I love and support.”

Should the Barcelona defeat spoil a wonderful season for United?