If you are looking for a deep, philosophical football book, ‘Squeaky Bum Time: The Wit & Wisdom of Sir Alex Ferguson’ compiled by Guardian journalist Daniel Taylor is not for you.  Instead, it’s a neat 128 page hardback published by Aurum Press in the middle of last month which is full of Ferguson witticisms, easy on the eye and the sort of book one can pick up, put down and pick up again. I have not enjoyed such a light hearted read for many a year and it’s not only for Manchester United, but for any other football fan as well.

Ferguson is simultaneously the most admired and feared manager in British football. During almost forty years in the dugout, and over half a century in the professional game, he’s torn up the record books, amassed a treasure trove of silverware, and unleashed the hairdryer – as well as the odd football boot on countless players, rival managers, referees and journalists. But amid the sound, the fury and the mind games lurks one of sport’s greatest wits. 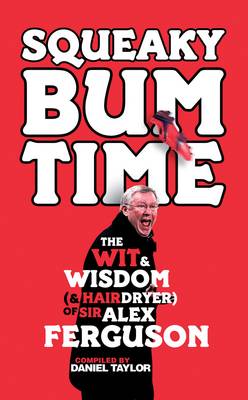 It’s a book which presents Sir Alex as he really is – uncompromising, unrivalled and uncut. On Arsene Wenger ‘They say he’s an intelligent man, right? Speaks five languages! I’ve got a fifteen-year-old boy from the Ivory Coast who speaks five languages.’ On Dennis Wise: ‘He could start a row in an empty house.’ On referees: ‘Can anyone tell me why they give referees a watch? It’s certainly not for keeping the time.’

On his humble beginnings: ‘People say mine was a poor upbringing. I don’t know what they mean. It was tough, but it wasn’t bloody poor. We maybe didn’t have a TV. We didn’t have a car. We didn’t even have a phone. But I thought I had everything, and I did: I had a football.’

Daniel Taylor is a football writer and has been the Guardian’s man in Manchester since 2000. His last book was This is the One: Sir Alex Ferguson – The Uncut Story of a Football Genius.