Perception seems to be far more important than reality these days – especially in football! Despite bringing home a fourth title in the last five years and reaching a third Champions League final in the last four, many critics, including some of Manchester Uniteds own fans, have consistently derided the side as being the worst Sir Alex Ferguson team to be crowned Premier League Champions

Perception seems to be far more important than reality these days – especially in football! Despite bringing home a fourth title in the last five years and reaching a third Champions League final in the last four, many critics, including some of Manchester Uniteds own fans, have consistently derided the side as being the worst Sir Alex Ferguson team to be crowned Premier League Champions. When you look at what the realistic expectations were back in August however, the final outcome was every bit as good as anyone could have hoped for.

As an example, HERE are the Truly Reds pre season wishes published on August 14 last year which means that hindsight is certainly not a factor. “As United fans we obviously want the Reds to win every singly trophy they play for but that’s hardly realistic so we decided that if United can only be successful in winning one, we wish that to be the Premier League which will be the 19th title needed to break the long standing record currently shared with Liverpool. Apart from that, Truly Reds is prepared to watch everyone else fight for the remaining honors. That includes the Champions League but we must confess that it will be rather nice to at least reach the final.”

Would ANY United fan have failed to accept that sort of outcome right there and then? How many rival critics would have scoffed, predicting that ‘Yeah right, and pigs might fly’ – and the final results at the end of May were? 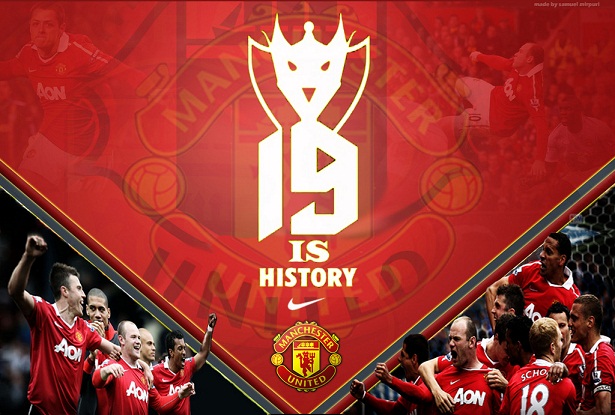 So here is a realistic season summary presented by James Robson of the Manchester Evening News – The sight of Sir Alex Ferguson singing in the rain put everything into context “Are you watching Merseyside?” he chanted, surrounded by thousands of fans on Sir Matt Busby Way as Saturday’s Wembley disappointment was swept to one side. 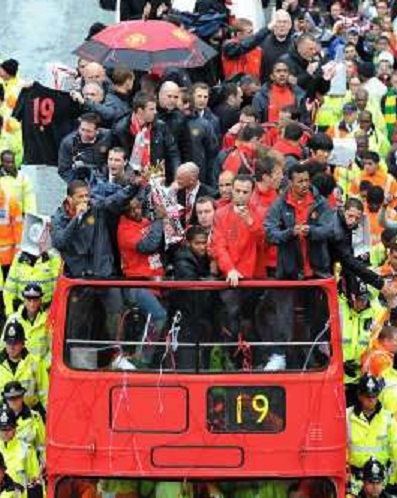 Season 2010-11 was never meant to be about Champions League triumph. Privately Ferguson would concede that European success was always more in hope than genuine belief, given the stage his side are at on their current arc of development. This remains very much a team in transition. One that is in the process of phasing out the aging limbs of Ryan Giggs, Paul Scholes and Edwin van der Sar – waiting for Nani, Anderson and Javier Hernandez to reach the peak of their powers.

So it would be unjust to allow defeat to diminish a season that by any measure has been an outstanding success. Ferguson set out on the campaign last August knowing his current class could not compete with his greatest over his 25-year rule. The main objective was to continue its progress while developing it further. He will have known it would be a considerable challenge to win a record 19th title, let alone a fourth Champions League, so to have achieved one and come so close in another was wholly worthy of yesterday’s parade.

Liverpool have been well and truly knocked off their perch – and since noisy neighbours, City, vowed to shift the balance of power in 2008, Ferguson has collected another two Premier League titles, reached the same number of Champions League finals. No wonder Sir Alex refused to get bogged down with regret over losing to a Barcelona side that are, frankly, on another planet.

“I said to the players that 90 per cent of the fans are more glad about winning a 19th title than disappointed about Wembley” he said, donned in raincoat and baseball cap and between salutes to hordes who congregated from Deansgate to Stretford. “I can’t say enough about my team, they’ve been absolutely fantastic.”

Could Ferguson have ever dreamed of such scenes when handed the keys to Old Trafford a quarter of century ago? Not even someone with his foresight could have envisaged such sustained success. And it was with an eye to the future that he travelled through Manchester yesterday. As much as he is obsessed with replenishing his team on the pitch, he knows the same needs to be done with those who show up in their tens of thousands each week.

“Thank you from the bottom of my heart” he said, addressing the fans directly. But it was the make-up of those who braved the elements that pleased him most. “What it shows is fantastic loyalty” he said “the number of children, kids sat on their fathers’ shoulders, that’s the future of Manchester United. Young people.”

It was an important point. He will know the club will face renewed competition from the blue half of the city when it comes to recruiting followers in the coming years. Nouveau riche and with the momentum of the FA Cup, City will present a serious threat both on and off the pitch in the immediate future. Which is exactly why occasions like these should be cherished.

There are 19 other Premier league sides who would readily swap places with United right now. It is perhaps the age of success heralded by Ferguson that disappointment is felt more profoundly than victory is celebrated. So accustomed to glory are an entire generation of United supporters that sometimes perspective can be hard to find. That comes directly from a manager, who is never satisfied, which is why it was heartening to see him frolicking in the rain, when he will have been rocked to his core by the nature of defeat to Barcelona.

“Are you watching Merseyside?” was wholly apt. How those Liverpool fans who enjoyed such sustained dominance in the 1970s and 80s would seize the chance to embrace the feeling of being English football’s pre-eminent force once more. Arsenal too, who must have forgotten what moments like these feel like. And Chelsea, who fleetingly tasted what it was like to be top of the pile last year before being firmly put back in their place by Ferguson.

And then there is City, who justifiably greeted a first trophy in 35 years with the kind of zeal the FA Cup deserves. Their revelry alone should serve as a stark reminder to United that these moments should not be taken for granted. As Ferguson’s players boarded the bus yesterday morning, grey skies above, both literally and metaphorically, they feared something of a no show from the people of Manchester.

They could not have been more wrong. And the way they interacted with the crowds was as much in relief as anything else. Title number 19 was so much more than an appetiser en route to the main course of the Champions League. It was a feast in its own right – and one that deserves to be heartily consumed.”

Despite two highly disappointing defeats at Wembley, 2010-11 must be remembered as a huge landmark for Manchester United – one in which the club is now officially recognised as the most decorated in the history of English football.

Where you disappointed by the results of United in the past season?