Will Ashley Young be ‘Underwhelming’ for United?

“You get a lot of players who are not selfish but do more of their work in the attacking half of the pitch, whereas Youngy is up and down”

There appears to be a number of Manchester United fans who are already dismissing the transfer of Ashley Young from Aston Villa as an expensive waste of money. One even went as far as to publicly declare on a club forum that “Here we have another underwhelming signing” – is he? Not if you listen to the opinions of his new and former team mates. Even the now retired United great Denis Irwin has welcomed the addition of Young to Sir Alex Fergusons squad predicting that the England international will become a real success at Old Trafford.

“I think it’s a great signing and I expect him to be a really good player for us” the treble winner told ManUtd.com. “He’s got good ability and is a real threat from set pieces which is something we’ve been missing in the last couple of years. He can play anywhere behind the front man and his delivery into the box is fantastic. He’s got a real eye for goal too and given the opportunity, I think he’ll chip in with a few goals next season.” 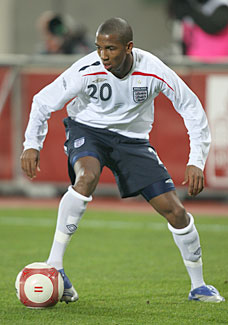 Irwin can also see a few more new faces before the transfer window closes. “The fact we’ve lost Nev, Scholesy, Edwin and Owen Hargreaves meant we needed to bring some players in because you need a big squad to be able to challenge for the top prizes. Phil Jones and Ashley Young are really good acquisitions and I’m sure both will do well. I think there will be a lot of money spent in the next couple of months by a lot of teams and I wouldn’t be surprised to see us bring in a couple more players.”

Villa midfielder Fabian Delph also paid a glowing tribute to his former colleague when he told the Birmingham Mail that “The men he left behind will miss him not just for his pace and skill, but also his work rate. But it happens all the time, it’s football. People come and go and you have just got to deal with it and just keep going.”

“I don’t think he could be replaced to be honest with you” he continued “his all round work ethic was absolutely unbelievable. He must have run twice as much as most people on the pitch. With his goals and assists it will be very hard to replace him – but if we can get somebody here half as good as him, then he would still be a great player.”

Delph insists that “You get a lot of players who are not selfish but do more of their work in the attacking half of the pitch, whereas Youngy is up and down, when he’s on the right hand side especially, working hard for the boys. The lads appreciate that from a winger who has flair but still wants to graft.”

United defender Rio Ferdinand welcomed the arrival of England team mate Young “Another top, hungry and young player joins the ranks” he stated on Twitter while  Michael Owen wrote on the social networking site “Great to hear the Ashley Young deal has been finalised. Great addition to the squad.”

So what do you think? Will Young prove to be “another underwhelming signing” by Sir Alex? Only time will tell. Personally I will trust Fergusons judgement each and every time. Yes, he has made mistakes in the past but he’s also shown for a quarter of a century that he gets it right far more often than not.

Do you expect Young to be a good acquisition for United?