“I once wrote to Sir Matt Busby to ask if I could be a ball boy at Old Trafford and he made it happen right away. I worked there between the ages of nine and 11. Even today, the club still supports us. Mum and I are still given season tickets and go to all the home games. And when Mum was taken into hospital recently, the club rang to ask if there was anything they could do – United still retains its family feel.”

While researching this weeks’ book review I happened to come across this article written on the 50th anniversary of Munich. It tells the story of a son who never knew his father because Manchester United skipper Roger Byrne lost his life in that tragedy, just days before his widow Joy discovered she was pregnant with their first child. It gave an opportunity for Roger Junior to recount his memories of growing up in those difficult times. Although this is a three year old article written in February 1958 for the Daily Mirror by journalist Julie McCaffrey, it loses none of the touching emotions experienced by the Byrne close knit family during those dark days.

Manchester United’s charismatic captain Roger Byrne should have flown home from Munich to the most exciting news of his life – he was to become a father for the first time. Days after he died in the tragic air crash that devastated the Busby Babes 50 years ago, his widow Joy discovered she was pregnant. The news from the doctor’s surgery made her cry – this time tears of bittersweet happiness to know she was carrying a legacy of the man she loved and lost, a tiny spark of brightness in a bleak time.

Roger Byrne junior was born on October 7, 1958 – eight months after Roger senior was among 23 people who perished when Manchester United’s British European Airways plane slammed into the icy runway. Roger junior does not remember the first time he was told why he didn’t have a daddy. Instead, from as far back as he can recall, everyone around him talked about his talented father who would have adored him. Understandably, he is fiercely proud of the man fate ensured he never knew. 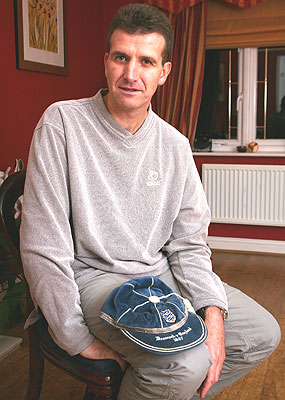 Breaking a 50 year silence to speak exclusively to the Mirror, Roger says “I always grew up with the awareness that Dad was a special man and that impression came from everywhere – my mum, my grandparents, family friends, even teachers at school when they heard my name. People were always passionate about Dad and what he and his team achieved, particularly my paternal grandfather.

Dad was an only child and was doted on so his loss hit his parents hard. Grandad took me to all the Manchester United games and talked about Dad all the time. His grief was tempered by immense pride and I grew up as proud of Dad as he was.”

Joy’s pregnancy in bereavement gave her a new focus for the future. But life for single mums in the 1950s and 60s was tough. She worked full time as a physiotherapist to provide for her young son, with help from both sets of parents and the football club which paid for their home for several years after its captain’s death.

Sadly, Joy, 74, is in hospital and will not be well enough to attend tomorrow’s memorial. But Roger will be there, as he has been for every service. He says “The services are always quite an intense time. It’s nice, but also poignant, to see the other players and hear stories and memories of my dad. But people there can remember the crash, or lost family members in it and are traumatised by that. Talking of the accident was very painful for Mum for many years and it brings it all back to her. Naturally, I feel sad for losing the dad I never knew and for the experiences and opportunities he and I never had.”

No doubt the surviving Busby Babes, such as Sir Bobby Charlton and goalkeeper Harry Gregg, will again do a double take to see the startling resemblance between Roger and his father who was killed two days before his 29th birthday. “People often say I move the same way as Dad, have the same mannerisms, the same facial features and thick hair and when I was growing up, people couldn’t help but make comparisons.

I’m sure seeing reminders of Dad in me made my mum sad, but she was very good at disguising that so as not to upset me. Dad was a strong character, a natural leader who was very passionate about football and his family. I was sports mad, determined to work hard and use all the talents Dad passed down to me. Dad was a scratch golfer and a great cricketer, and I’ve always had good coordination and a love for all sports.

I felt I was being particularly compared to him whenever I played football but I didn’t resent that, I quite liked the extra attention. I was never as good as Dad but always dreamed I’d play for Manchester United so his legacy could live on.”

Young Roger never became a professional footballer but his career might have been so different had his dad been on the sidelines to give expert advice and a fatherly pat on the back. But Byrne junior has grown up free of bitterness about his fatherless life and instead celebrates his dad’s many achievements. “Dad was a talented footballer and worked very hard at it. Funnily enough, he did his national service with the RAF and didn’t make it into the force’s football team. He took up boxing instead.”

His team mate Duncan Edwards was considered a natural and the most successful player at the time with the potential to play at the highest level for many years to come. But Dad was the type of player who learned and understood the game’s technicalities. Even then Dad thought about a career beyond football. He met and fell in love with Mum when they were physiotherapy students at Salford Royal Hospital in 1955.

Dad was doing a day release physiotherapy course while he was at Manchester United. I couldn’t imagine Wayne Rooney doing a course now! But anyway, Mum said the students loved having a footballer amongst them and the children he treated were always delighted to see him.”

Joy married Roger in 1957, only six months before the crash cruelly made her a widow. Roger says “Mum has never told me much about the accident or how she heard the news that awful day – I’ve pieced more together from newspapers and books myself. On the day, news of the crash got through by word of mouth and it just got worse and worse. It was nothing like today, when we have 24-hour news channels.

Mum and I worked through our grief together and always tried to be positive. But I know she loved and missed him a lot. Life was extra tough for single mothers back then but she had a lot of support from both sets of my grandparents and Manchester United, as we lived in a club house for many years.

I once wrote to Sir Matt Busby to ask if I could be a ball boy at Old Trafford and he made it happen right away. I worked there between the ages of nine and 11. Even today, the club still supports us. Mum and I are still given season tickets and go to all the home games. And when Mum was taken into hospital recently, the club rang to ask if there was anything they could do – United still retains its family feel.”

Joy worked full time as a physiotherapist to support her young son, determined that he would have the good education his father would have wished for him. Roger attended a rugby playing school in Manchester and veered towards the rival sport. He later gained a sports science degree and in 1988 moved from Manchester to Swindon, Wiltshire, where he lives today with his wife of 12 years Gill. He works as Swindon Council’s head of leisure.

Now, after outliving his father by 20 years, his mother still recognises attributes he shares with his dad. “Dad was fiercely loyal and always said he didn’t mind being criticised himself but hated it when people criticised his team. I’m exactly the same with my team at work.” Joy – who married James Worth in 1976 and had a daughter Elizabeth, now 29 – donated all of Roger’s photographs and memorabilia to the club to ensure they were shared with fans.

Today, one of Roger’s 33 England caps – from the 1957 game against Denmark, and a Brazil shirt he swapped on the pitch are the only souvenirs his son possesses. But what he relishes most are the anecdotes about his father he has collected over the years, the little nuggets of information that keep the United and England full back’s spirit alive.

Roger says “In Sir Bobby Charlton’s book he described how superstitious dad was with his pre match rituals. Even Mum didn’t know about that. When I was younger I was always saying to my mum and grandparents ‘Tell me more about my dad.’ I loved it when his name would pop up in the newspapers every now and then, and I treasured a football card with his picture on that came out of a cigarette packet.

I remember keeping it in a drawer at home for years. My grandma said she once looked out of the kitchen window to see the entire United first team in her backyard, doing press ups as part of their pre season training. She gave them all a cup of tea and a piece of cake.

It’s funny when you think of Cristiano Ronaldo in his spanking new boots for every game, whereas Mum says Dad hung on to his really old boots because they were so comfortable. Mum kept telling him to get new ones because they were in a shocking state but he refused. Eventually, his boots were so bad he made Mum take them to the cobblers because he was too embarrassed to go himself.

Then there was the time he and the team did a tour of America and he came back with a really short crew cut. His parents made him move out until it grew back – imagine what they’d think of footballers’ hairstyles now!

But my favourite story shows how caring he was, how much he wanted to help people. He’d just arrived home exhausted after training when a bunch of kids knocked on the door asking for his autograph. My grandmother told them it was best to leave him alone for now but he came to the door and signed each one. It seems like he was always good with kids and I imagine he would have been a great dad.”

Written by Frank Scicluna
Book Review – A glance back at United in the 50's
Will Ashley Young be ‘Underwhelming’ for United?