Football in the 1950s was a far cry from the game that we are familiar with today. For many, Saturday morning meant putting in a shift at work, with the sound of the 12 o’clock hooters signalling a mad dash for the exit, an even quicker bite to eat and then off to the match. Stadiums were spartan, with little covered accommodation and terracing packed with swaying bodies eager to see the heroes of that period.

Big name internationals who often travelled to the game on the same public transport as their supporters, frequently had another form of employment in order to supplement the meagre wages paid by their clubs. Grass on the pitch after October was something of a rarity, with the muddy conditions doing little to create the perfect surface for the players already handicapped with their ankle high leather boots, heavy playing kit and even heavier match ball, on which to display their undoubted talents. 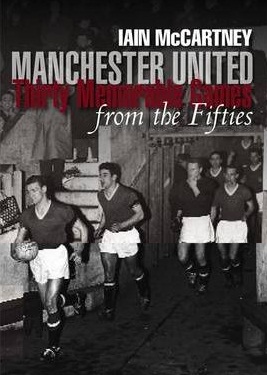 They did however, entertain the masses who flocked to grounds on a weekly basis, conjuring up memories which lasted a lifetime. Games were written into the history of the clubs with incidents, and indeed the complete 90 minutes being narrated from father to son as the tradition of supporting a particular club was handed down through the generations.

Published by DB Publishing in October 2010, Manchester United : Thirty Memorable Games from the Fifties by Iain McCartney is a 192 page hardcover book which will take you back to those halcyon days of yesteryear, bringing to life those thrilling encounters and recalling the exploits of players who were to become legends in the illustrious history of the club.

McCartney has previously written many biographies of United players as well as contributing to the match programme and other related magazines. He has also been running the Manchester United Collector’s Club for the past 19 years. A keen collector of United memorabilia, Iain delved into his vast collection of newspaper cuttings in the production of this book.

The 1950s brought mixed fortunes for Manchester United. It was a decade that saw manager Matt Busby having to rebuild the team in the immediate post war period and his assistant Jimmy Murphy, forced into hauling the club back from the brink of despair and total collapse following the Munich air disaster. The rest, as they say, is history which I, for one, cannot get enough of.

Should United fans move on from those days and simply concentrate on the future?