One more to come?..and other transfer gossip

Sir Alex Ferguson is reportedly ready to rival Chelsea for the signature of Joao Moutinho. The FC Porto star has emerged on the Stamford Bridge radar following the arrival of Andre Villas-Boas in west London

Transfer rumours are a dime a dozen. Very few have genuine substance so they should always be taken with a huge amount of cynicism. Yet they cannot be completely ignored in case there’s the slightest grain of truth in them. Some media outlets are obviously more reliable than others so Truly Reds is prepared to report the gossip and give a rating of 1 to 5 as to how believable it’s likely be. A rating of 1 can almost certainly be dismissed out of hand while a 5 may give the story some merit and warrant a small wager. Have a look at the latest United transfer gossip being reported but be warned – only believe what you want.

Fergie completes his 3rd signing of the summer 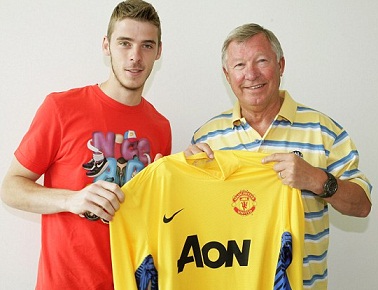 Will there be one more?

Sir Alex Ferguson is reportedly ready to rival Chelsea for the signature of Joao Moutinho. The FC Porto star has emerged on the Stamford Bridge radar following the arrival of Andre Villas-Boas in west London, with the former manager looking to raid his old club for a number of players if reports are to be believed. However, Ferguson has been in contact with his old assistant Carlos Queiroz with the pair discussing the player during his time at Sporting Lisbon. United has joined the race for the player according to Portuguese publication Diario de Noticias which claims that Sir Alex has been tracking the player. Ferguson is  known to be in the market for a playmaker with the Old Trafford chief searching for a replacement for Paul Scholes this summer. It may be wishful thinking but can possibly be RATED -2

Manchester United have made enquiries into the availability of Napoli’s Edinson Cavani, possibly spelling the end for Old Trafford’s current top goal scorer Dimitar Berbatov according to footybunker.com. Cavani has been under the microscope of numerous clubs this season as the 24 year old netted 26 goals in 35 league appearances for the Serie A side. It was at first understood that Manchester City were keen on the Uruguayan however their interest has lessened, seeing Fiorentina’s Alessio Cerci as a much more likely target. This story can realistically only be RATED – 1

If a rumour can be rated below a 1 this has got to be it. United are tracking the situation of Daniel Sturridge and could be prepared to launch an incredible move for the Chelsea striker. Click Manchester has claimed United boss Sir Alex Ferguson is a keen admirer of the 21-year-old and sees him as the future of the England attack along with Danny Welbeck. Sturridge’s future appears increasingly likely to be away from Stamford Bridge as the Blues embark on a summer of heavy spending particularly in the forward department. As good as Sturridge may be, a move to Old Trafford can only be RATED – 0

Will Sir Alex bring anybody else in to Old Trafford?