“The only thing we did differently from that 2-0 defeat in Rome was to score”. It’s hard to argue against that blunt assessment from the now retired Manchester United legend Paul Scholes who has no hesitation in admitting that his side were no match for Barcelona during the Champions League Cup final at Wembley in May – but believes that manager Sir Alex Ferguson will do what is necessary for the team to improve further.

“I haven’t watched the game back” Scholes told the Daily Mirror “but on the night we felt we were a million miles away from them. It’s a big task but I’m sure the manager has plans about how to do bridge that gap. There’s no doubt – that’s where you want to be. Barcelona are the benchmark for everybody to reach. You have to hold your hands up and say they were better but you don’t like doing it. You don’t like admitting it, but this time they were, as they were two years ago.” 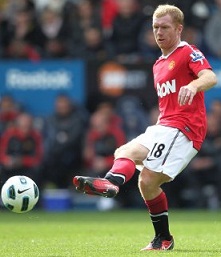 “It’s going to take something special to get anywhere near Barca but I think we’re the team closest to doing it” he said “I think it’s the manager’s biggest challenge now, definitely. He’ll set his sights on Barcelona and trying to get to that level. But I think it’s the biggest challenge for all of us – not just the manager but the players and coaching staff as well” Scholes insisted.

Those two Barcelona defeats still haunt the United legend but losing at Wembley in his last game for the club was especially hard  “Yes it was bad, probably as bad as the 2-0 Champions League final defeat two years ago in Rome” Scholes said “you would have hoped that in that two years you would have been able to bridge the gap a bit really. We were a million miles away from them. When you are taught a lesson like that – not once, but twice – it stays with you.”

“I think the biggest thing about the Barcelona players is their unselfishness – the whole team’s. I know Lionel Messi is the one who scores 50 goals a year but among the team he is not the big star” Scholes said “as a group they are all stars and there’s not one who stands out who wants to take the credit. They are just an unselfish team in which not one of them is out for glory.”

“I don’t know how long Sir Alex will keep going but that drive and determination is still there. He’ll have been thinking about the Barcelona game all summer and working out how he can avoid that sort of thing happening again. Some players might forget about it the day after but I didn’t. When you’re taught a lesson like that it stays with you” he confessed “you think about how things might have been done differently and I’m sure that will have been going through the manager’s mind ever since the final whistle went. In fact, he’ll be thinking about that until next season’s final.”