If there’s a bigger name in the history of English football I’m yet to hear it. Legends like Bobby Moore, Sir Stanley Matthews, Tom Finney, Sir Alf Ramsey and many others are all genuine contenders but surely, nobody can compare with Sir Bobby Charlton. The Manchester United icon was born in 1937 in Ashington, Northumberland. He made his first team debut for United in October 1956 and won the FA Cup, three Division One championships and the European Cup with the club. He then joined the board in 1984, a position he still holds today. Charlton was a key member of the victorious England World Cup side of 1966 and played 106 times for his country. He was awarded the OBE in 1969, the CBE in 1973 and was knighted in 1994, the first footballer to gain such an honour since Sir Stanley Matthews in 1965.

It has to be admitted that I have not got hold of this book yet so I’m relying on the following review authored by ‘Random Reader’ on the amazon.co.uk website who wrote that “The boring tag attached by so many to Bobby Charlton has always frustrated me. Here was a man who played football with attacking Brazilian flair and never intentionally made a tackle in his life. A man with a thunderbolt of a shot who made the commentators voice rise when uttering his name. It was notable, if not remarkable in these commercial days, that he had never before published an autobiography. 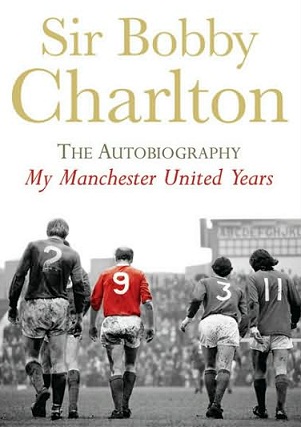 Looming large of course over everything was the Munich air disaster. One couldn’t help feel that his rather dour, pre occupied demeanour had emerged from that tragedy. Here there are glimpses of the pre Munich Charlton enjoying the company of his closest friends David Pegg, Eddie Colman, Tommy Taylor and his upward gaze to his hero Duncan Edwards.

The world was truly at their feet. Then came that fateful crash. The heart is ripped out of the team but also the football heart to some degree silently seems to depart Bobby Charlton as well. He explains how he just can’t understand how or why he survived, so unscathed, and his friends did not. It is something that will trouble him for a lifetime.

The remainder of his life certainly seems to have been driven by the need to bear witness to what was lost. Just one among many geniuses, Charlton bears testimony to the greatness of the others. “Here I am” he says “see what I achieved and yet I was only ordinary among the Busby Babes.”

Of course Bobby Charlton won the elusive European Cup with Busby at the helm, he won the World Cup with England and he played sublime football as one of the big three of Best, Charlton and Law. He deals in this book most passionately with Munich and with his family dispute with brother Jack and their mother – here one feels he is speaking from raw emotion. He does that less so with the rather club-justifying position on Beckham’s departure and the sale of the club.

However, there is a lot more here than in most football autobiographies and less platitudes, albeit with some skimming over of key events – for example, the battle for the commercial ownership of United and the controversy over the Munich survivors fund. He is clearly anxious for the record to show that his contribution to the Alex Ferguson reign is recognised too.

One feels Sir Bobby Charlton has worked out his self imposed penance for surviving Munich by being the best he could possibly be, both for his beloved club and country. I only hope that in addition to his sense of duty he manages to draw some joy from the pleasure he gave to millions of us as an Englishman playing football the Brazilian way.”

This is one book which will most certainly be added to my collection.