“Our supporters are renowned for giving people time. Of course, there’s nothing they like more than watching young players come through the United ranks into the first team but they’ll have similar feelings about Jones and de Gea, given they’re only 19 and 20″

One of the longest serving players in Manchester United’s history believes new arrivals David de Gea, Phil Jones and Ashley Young will have the fans’ full backing at Old Trafford. Legendary left back Arthur Albiston says the home faithful could play a big part in helping the trio of summer signings adapt to their new surroundings as he told Manutd.com “Our supporters are renowned for giving people time. Of course, there’s nothing they like more than watching young players come through the United ranks into the first team but they’ll have similar feelings about Jones and de Gea, given they’re only 19 and 20.”

“The fans at Old Trafford have loads of patience with new players coming to the club, especially young ones, and they’ll get behind them. Everyone’s going to make the odd mistake but our fans are very forgiving. I’m sure Peter Schmeichel would hold his hand up to one or two mistakes in his first season. That’s something that goes with the territory. The crowd will give de Gea, Jones and Young every backing and if the new boys perform as well as Javier Hernandez and Chris Smalling did in their first season, I’m sure the supporters and the manager will all be delighted.” 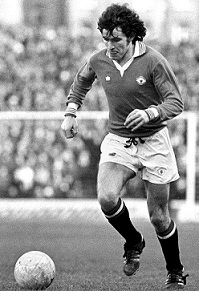 Albiston acknowledges there are parallels between de Gea and the goalkeeper he made most of his 485 United appearances in front of, Gary Bailey. The South African was also just out of his teens when he made his debut for the Reds in 1978 and like de Gea, was effectively replacing a long term number one at Old Trafford – in his case, 1968 European Cup hero and 1977 FA Cup winner Alex Stepney.

“De Gea’s in a very similar situation to Bailey who got into our side at a very young age and went on to be a fantastic servant for United” recalled Albiston “I don’t know what de Gea is like confidence wise or character wise. But Bailey had a strong personality with bags of confidence. And although he was thrown in at the deep end, he wasn’t shy about giving orders to experienced international defenders.

“That’s something you’ve got to do as a goalkeeper and some people find it difficult. But all players have to speak on the pitch and a goalkeeper has to be especially vociferous and organise his defence. De Gea has proved he can play in front of big crowds – he just needs to get to know the lads, especially the defenders. Like Bailey, Schmeichel and Edwin van der Sar, he must not be shy in telling them what to do.”

Like any other supporter Albiston gets excited by the summer signings and intrigued by the prospect of more new players coming in “I think Sir Alex will be looking at his midfield, I’m sure we’d all like another Paul Scholes, a young Paul Scholes, to come into the side. But we’ll just have to wait and see and, as always, put full trust in the manager” he says.

“I’m sure that Ferguson is always on the lookout for players in every position but if he could get another midfielder in this summer, I think that would help him because we’ve lost not only Scholes but Owen Hargreaves as well. So Sir Alex might be trying to get another body in that department to take the weight off Darren Fletcher, Michael Carrick and Anderson”

“Not that the manager ever signs players willy nilly just to make up numbers in the squad” Albiston insists “he will always want to find players who are good enough to force their way into his first team and a lot of groundwork goes into the search. He covers everything and knows exactly what the situation is with different prospects. He has pulled some rabbits out of the hat over the past 15 to 20 years – nobody expected Eric Cantona to come here, for example.”

How is Ferguson’s new squad shaping up so far?