This may sound arrogant, and maybe it is, but the truth is that Manchester United is no longer a mere football club. It has become a world institution with a brand name which stands alongside giants such as McDonalds and Rolls Royce

This may sound arrogant – maybe it is, but the truth is that Manchester United is no longer a mere football club. It has become a world institution with a brand name which stands alongside giants such as McDonalds and Rolls Royce. Manager Sir Alex Ferguson has led his club to a record breaking Premier League title just a few weeks ago – an honor that United has won 19 times.

Now, as part of a 12 day “Champions Trophy Tour” of Asia, United held a cocktail party in Shanghai on June 29 at their official sponsor Hublot’s downtown boutique. Fans were thrilled to see 30 year old star defender Patrice Evra – born in Senegal and grew up in Europe. He spoke with CNNGo about his views on Asian travel, fans, football and family. If you have no idea what CNNGo is, you can have a look HERE

CNNGo: Have you suffered culture shock traveling from Britain to Shanghai? 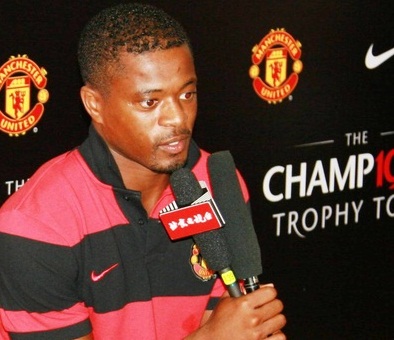 Evra: Yeah, a little bit. I feel like a rock star, but it is nice. The fans love you so much. In the United Kingdom, the fans love you, but not like this. In Asia, it’s crazier. They are so enthusiastic. It is a nice feeling, a very nice feeling.

CNNGo: You were a striker, now a defender. Why the switch?

Evra: It’s simple: the coach.When I was playing for Nice in France, the left back was injured. My coach asked me to fill in. I did it for the last 15 minutes of the game.

The next game, he said: ‘You want to play left-back again?’ I said: ‘No, I am a striker” He said: ‘OK, then don’t play.’ I said: ‘Give me the shirt, I’m gonna play left-back.’ After that, I played every game as left back and I won every game as a left back in the second league. But I was still not accepting to play as a defender. The only time I accepted playing a left back defender is when I played for Manchester.

CNNGo: How do you beat jet lag?

Evra: I don’t know but it’s difficult. For example, I slept at midnight and I woke up at 4 a.m. in the morning. But when you arrive and you see the people and you see they are waiting for you, you forget everything.

CNNGo: We heard fans are collecting different Manchester United-themed Hublot watches. They are so expensive. As a footballer, do you get a free one every time?

CNNGo: How many siblings do you have?

Evra: 24 siblings. My dad doesn’t like TV, he doesn’t watch much TV. It was a very competitive family to grow up in. We can make two football teams.

CNNGo: Is that so you can talk to Park Ji-Sung?

Evra: No, Ji speaks very good English, but I want to learn Korean so I can speak to the fans. I have been to Korea four times and they love me so much but I can’t communicate with them.

CNNGo: Manchester United has won the Premier League 19 times. Does it lose its excitement after winning so often?

Evra: No, that is the curse of Manchester United. It’s never enough to win the trophies. That’s why United is a big club and why we want to stay on the top. Next year we will have the same hunger to win every game. If you don’t have that hunger, you will get the hairdryer treatment from the boss!

The original interview can be viewed on CNNGo

The France international had no hesitation in adding that “Sir Alex has made some great signings in the off season. We will give them all a nice welcome. I think they’ll be important and I’m very confident about the future. After we lost the Champions League final I said that we had lost just a game. But I’m confident about the future, especially with our great new signings, and I think we are going to win it next year. We hope to retain the title but also to win the Champions League.”

Can there possibly be a bigger brand in British football than Manchester United?