Rio Ferdinand is fuming that Manchester United are not the automatic choice to retain their Premier League title. Rather than reflect on a fourth championship in five years, and a record 19th overall that allowed them to eclipse Liverpool as England’s most successful team, much of the summer debate around United has centred on that Champions League final failure against Barcelona. Sir Alex Ferguson’s insistence that he currently has no interest in acquiring Wesley Sneijder will merely fuel a sense of weakness given it was general opinion at the end of last term that United badly needed a midfield general to replace Paul Scholes.

Ferdinand is adamant the negativity is due to a desire to see United’s era of dominance come to an end…and he doesn’t like it. “It is ridiculous. It makes me laugh,” the England defender told Press Association Sport. We have won the league four times out of five. Half of it is that people want someone else to win it. 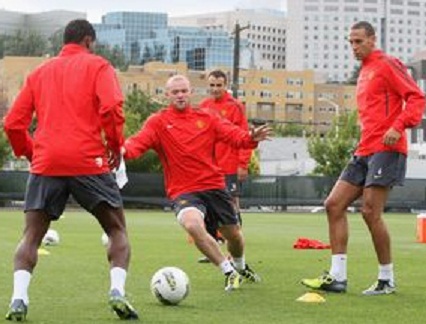 “Before I came here, United used to win the league and I would think it would be nice from a fans’ point of view to see someone else putting up a challenge. Your heart rules your head sometimes. Not that it bothers me.” Ferdinand delivers the last sentence with a chuckle.

In fact, the 32 year old is not completely accurate in his assertion given the bookmakers have universally installed United as favourites this season ahead ofChelseaandManchesterCity. That their odds are not prohibitive is purely down to that chastening experience againstBarcelona.

There has been plenty of analysis about what happened at Wembley. Some feel United were not as good as they were when they lost to the same opponents inRometwo years previously, others that they were substantially better. Few can find any conclusion beyond United being beaten by a substantially better team, the gap so wide not even the arrival of Sneijder could close it, even though Sir Alex Ferguson for one is relishing the challenge Barca present.

Just as in 2009, the crushing of United’s European dream came after a title had been lifted. Two years ago, Ferdinand spent the summer moping. This time round he took a different view of the world.

“It was a weird summer” he said “we won a 19th league title which was obviously fantastic but we lost the Champions League final. When you dust yourself down and analyse everything, it was a successful season. If someone had said at the beginning we would reach the Champions League final and win the league, we would have accepted it and I am sure the media would have thought we had done quite well. That is how you have to look at it.

The time before inRome, I spent my whole summer moping around even though we had won the league. I just think you have to savour moments like that. The 19th title was a big event. We should enjoy it.”

SeasonedFergusonobservers are not prepared to accept the dismissal of interest in Sneijder, delivered inSeattlelast night less than half an hour after the Scot arrived at the team hotel following a six hour flight fromBoston, represents an end to the matter.

The arrival of chief executive David Gill later will dampen down expectations of a deal being concluded before United return toEnglandat the end of the month though. There has always been a suspicion that once wages and additional costs are added to a hefty transfer fee, United may not see Sneijder as representing value for money on the basis he is already 27 and will have a poor relative resale value at the end of any contract.

For now, United will concentrate on what they have, which has been bolstered by the signings of Ashley Young, Phil Jones and David de Gea. The latter two also arrive today, along with fellow Under-21 stars Danny Welbeck and Tom Cleverley.

None of the quartet will be involved in next Wednesday’s encounter with Seattle Sounders, the second part of a five match tour which is essential preparation for a new season in which Manchester City represent an even greater threat and Chelsea will have a new manager in Andre Villas-Boas.

“There is a challenge every year” reflected Ferdinand “you have to rise to it. Each year we have risen to it and come through. We have won four out of the last five leagues. It has not been easy and it will be another tough season this year but we are looking forward to it.”

Has Ferdinand got a valid reason to rage?