Had he headed for Spain he might have become one of the world’s soccer immortals. As Alfredo di Stefano reflected later “Ah, Charlee Meeten, numero uno. If we have heem we never need Francisco Gento. Gento he queeck, but Meeten, he more clever.”

Believe it or not, there was a time when football was a working mans game for its biggest stars. And no, it was not centuries ago but within the lifetime of many who are reading this. Can anyone imagine the likes of Wayne Rooney earning £8 a week at Manchester United? Yet that was precisely what Englands greatest footballers were faced with just 60 years ago! Yes, it sounds hard to believe in 2011 but I was in my early teens during those days and remember when England captain Johnny Haynes became the first £100 a week player in the early sixties and some pundits predicting the destruction of professional football. 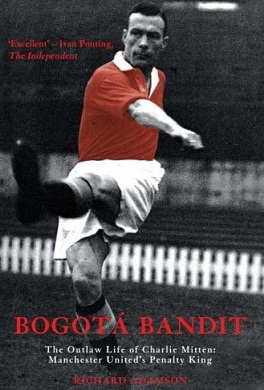 ‘Cheeky’ Charlie Mitten was an ever present in the first great post war side which established the legend that is Manchester United today. But he stepped out of line – becoming a trailblazer in the players’ contract revolution. Mitten walked out in 1950 to play in South America for a millionaire football baron who was offering riches beyond the dreams of even the brightest soccer stars of Mitten’s generation.

Viewing the situation objectively, it would be a harsh judge who blamed Mitten for the split. At a time when clubs were filling their coffers during the post war football boom, top players earned £8 per week during the season and a mere £6 in the summer. Suddenly, against a backdrop of constant muttering about a possible strike by unhappy professionals, he was offered the staggering signing on fee of £10,000 to join leading Colombian club, Santa Fe.

Mitten had never dreamed of such a crock of gold. Indeed, he could have spent 25 years with United and never received anything like it. The Colombians were ready to give him enough to buy a row of houses, with a huge weekly wage on top.

Not surprisingly, he accepted, but then his luck ran out. At the time he left Old Trafford, Colombia was outside Fifa and any player based there was considered an outlaw. But then, after he and his family had spent one season in Bogota, the South Americans were re admitted by the sport’s governing body – but only on condition that the so called rebels were sent home.

During one short season in Bogota, he won a place in South American folklore as orchestrator of one of the most sensational upsets in football history – a scratch Colombian XI’s defeat of the world champions, Uruguay. He emerged chastened but intact as revealed in this excellent biography by Richard Adamson.

“The Bogota Bandit”  explains how Real Madrid were assembling what many still believe to be the finest club side of all time in the early fifties, and they wanted to sign three of the Colombian mercenaries. They acquired the majestic Alfredo di Stefano and his fellow Argentinian Hector Rial but were frustrated in their quest for Mitten because his family was homesick for England.

Had he headed for Spain he might have become one of the world’s soccer immortals. As Alfredo the great reflected later “Ah, Charlee Meeten, numero uno. If we have heem we never need Francisco Gento. Gento he queeck, but Meeten, he more clever.” Rejecting the offer from Real, Mitten returned to Britain only to find he had been frozen out by the FA selectors.

But, though spurned by England, Mitten had still achieved the unlikely record of being capped by three different countries –Scotland, England and Colombia. When Manchester United also cold shouldered their errant star, he joined unfashionable Fulham and, in a brilliant swansong between 1952 and ’56, inspired a glorious young forward line up that included the late Johnny Haynes.

Mitten then went into management, first at Mansfieldand eventually at Newcastle, but his attempts to introduce a more skilful approach to the game and his warnings of an impending soccer hurricane from the South American continent were largely ignored. At the time of his death in 2002, he believed England were still paying the price. Sadly, he was right on the money!

Paperback published by Mainstream Sport in 2005