Manchester United andEnglandlegend Bryan Robson was known for his own fearless approach – a quality that has to be shown again as he deals with a course of treatment for throat cancer. In his first major interview since he was diagnosed with the condition, the man ­remembered for popping his own ­dislocated shoulder back into place during an England World Cup match and getting on with the game, is going about this fight with the same dignified courage.

Back home in Cheshire after a two year stint managing the Thailand national team, he revealed to The Mirrors Ralph Ellis that he’s still a big part of the United ­family and the club have done ­wonders for him since discovering the shock of his illness when he was rushed into a hospital in ­Bangkok for an operation to remove a ­tumour – with five weeks of ­radiation treatment to follow. 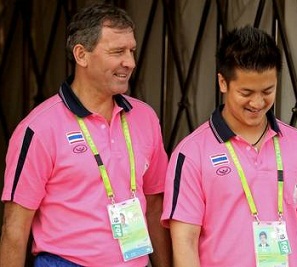 Captain Marvel has admitted that “All I’ll say, and I don’t want to go on about it, is that I’ve just tried to be really positive towards the treatment. I’ve finished with it now but still have to go back. I’ll wait for the next test and see how it goes from there.”

“The one thing I’d say is that I can’t thank enough all the football supporters from all around the world that have sent get well cards and other messages of support. It’s amazing to get such a ­fantastic response. I’ve driven everybody at Old Trafford mad because with me being an ambassador for the club, all the mail went to them so they have had to handle it all.”

Robson left his ­management job in ­Thailand because he felt he was “hitting my head against a brick wall”. He spent two years as national team manager, taking over from old pal Peter Reid. “I spent two years trying to build a coaching structure but ­nothing ever moved ­forward.”

“In England we’ve had the McDonald’s scheme for ten years, creating coaches at every level of the game. When I passed my Pro ­Licence I think there were barely 100 with the ­qualification, now there are around 2,000. I wanted to put that sort of structure into Thailand.

“They thought that if you just worked with the top ­players for a week before a game they would get better but the real work has to happen every day at their clubs. I just felt I couldn’t take things any further.”

Best of luck in your battle Robbo