Manchester United’s Dimitar Berbatov very rarely speaks in public. It is an attitude that has contributed to the air of his mystique. He has now revealed that Barcelona is the only club which could lure him away. And he has told Old Trafford fans not to confuse his laid back approach with a belief that he does not care. The classy striker should be heading for the new campaign on a high after sharing the Premier League’s Golden Boot with Carlos Tevez and firing United to a record 19th title. Instead, the 30 year old is facing up to what could be the biggest challenge of his career after he did not even manage a place on the bench for the Champions League final.

Younger players are keen to oust him but Berba said “Manchester United are at the top. Where can you go from here? Maybe Barcelona? At the moment, I don’t see anything else. If you go somewhere else it is a big step down.” 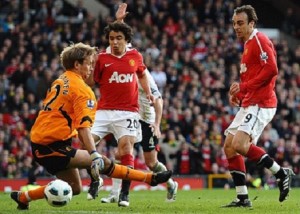 Barca gave Berba the worst night of his career. The Bulgarian was reported to have spent the 3-1 Champions League defeat at Wembley alone and in tears, trying to mask his desolation from club officials. “I am a very proud person” he admitted “I don’t like to show my weaknesses. I don’t want to show my emotions in public. That is why people probably sometimes misjudge me.”

The truth is Berbatov wants to win – but he wants to win with style. Following his arrival at Old Trafford, when demanding supporters watched him replace the industry of Carlos Tevez, the sniping began at a player Sir Alex Ferguson believed in so much that he broke the club record by spending £30.75million.

Berba confessed that he is bothered by claims he does not care. “I always play like this” he said “that is what got me here. You are not going to see me puffing around the pitch. There is a saying in Bulgaria that great quality does not require much effort.”

It is clear that Berbatov does care, both about his team and his performance. It seems he wants to be liked, not in an arrogant way, but as an individual who tried to do things a little differently. “I want to be remembered as a good player, doing things the fans enjoyed” he explained “I always tend to think my goals are beautiful goals. That is what I want to score, beautiful goals, and create beautiful chances.”

“I come from a small country” he concluded “I have the good fortune to play for Manchester United. For the time I am here I try to do my best and win everything there is to win. There is no other way I can play.”

Should Berbatov change his attitude towards football in order to please his critics?

3 thoughts on “‘Quality does not require much effort’ says Berba”