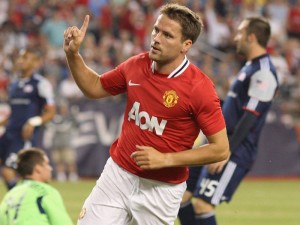 Michael Owen believes Manchester United will have no fear of Barcelona If they meet again in the Champions league again. United are preparing to get their new UEFA Champions League campaign under way next week against Benfica and the Catalan giants are strong favourites to reach the final in Munich next year.

Owen, who is yet to play his first game, claims Manchester United would have no worries about facing Barcelona again.

“If we played Barcelona again in the final, then we’d have to do something differently because they obviously outplayed us on the night,” he told Inside United.

“Then again, I don’t think there’s any shame in losing to a team like that. We’re not ashamed of how we played at Wembley but, if we played them again, then I do think we’d have to look at adopting a slightly different approach.

“On that one night’s evidence, you’d have to say that there was a gap between the two sides because they beat us quite convincingly. But that was a one-off game. We wouldn’t be frightened of playing them again, that’s for sure.”

Did United mind the gap between themselves and Barcelona?