Robin van Persie is a thorough – bred pedigree made for Manchester United .The silk guile steel a track record on his glittering CV. Albeit absent of any winners medals to confirm the Dutchman’s quality in the EPL. 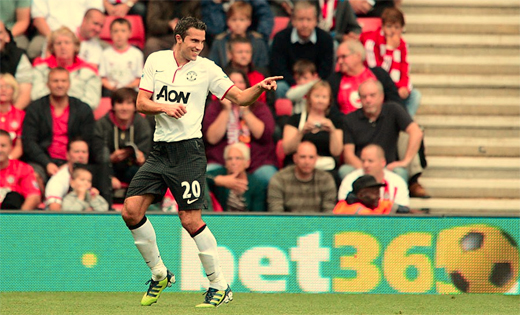 Robin van Persie is a thorough – bred pedigree made for Manchester United .The silk guile steel a track record on his glittering CV. Albeit absent of any winners medals to confirm the Dutchman’s quality in the EPL.

To be awarded a penalty for a careless tackle on van Persie .Who bravely decided to take the spot kick in the infancy of his Manchester United career. What followed next the non Andrea Pirlo cheeky chip from the kick was as van Persie later a lauded to in his post match interview unprofessional, a spasm in logic. Van Persie said later “I set high standards for myself that was not good enough. I will work on that” . Those are the words reactions of a winner, who still acknowledges at 29 he is learning the game of football.

The penalty miss saved by Davis the Southampton No1 energized van Persie to take the game by the scruff of the neck winning the game for Manchester United in extra time. Van Persie recording his first hatrick notably to date netting 4 goals in a mere 203 minutes of playing time. A stunning start to his Manchester United career .Winning his first of likely many, man of the match awards voted for by more than 70% of fans as the key to the victory on the English south coast.

The Dutchman while accepting the adulation quick to point out , as do all team players , the critical role that the introduction of Paul Scholes had with his entry to the fray. “It was actually Paul Scholes who changed the game .Every single pass he hit was the right one “.

This is galvanizing talk, creating a togetherness that van Persie is bringing to United. There is no ‘ I ‘ in team .He fully understands this with the previous difficulties and current ones with the Dutch national side , as van Persie hopes to curry favour again with the Oranje to make amends for Holland’s disaster in this summer Euro’s in Poland and the Ukraine.

More motivation to be a raging success at Manchester United while van Persies’s Manchester United start has been breath taking. The future together with Wayne Rooney will be sensational .A combined 71 club goals and 24 assists in all club competitions last season should make for devastating artillery in the spearhead attack.

While Wayne Rooney is on injury leave, attempting to lose weight, control his diet and maintain muscle strength where possible. He will have noted the start at Manchester United of van Persie , the gauntlet that has been thrown down to the strikers . I’m here now he has by his actions said, you will have to perform to retain your place , take your opportunity when it arises .

I mean to start every-time! Fantastic competition for the starting berths. I think Rooney will grasp the challenge as he will have watched Van Persie’s baptism like a duck to water.

A natural oozing all the traits to be a Manchester United great. Danny Welbeck is a mere novice at 21 and will learn his trade further during the 4 years of van Persie’s contract .Welbeck will get his chances as will Javier Hernandez who will have to perform at the top of their game when given game time .It’s a win – win situation in striking potency that is building for the future years with a balanced blend of youth and proven world – class strikers.

Behind the big guns up top, it’s worthwhile restating Shinji Kagawa fantastic start at Manchester United. Being only the 5th Japanese player to make the move to the Premier league. Bringing with him from Dortmund to enhance what we have already seen in a Manchester United shirt , excellent accurate passing one of his many attributes . When at Dortmund, Kagawa was directly involved his 49 league games with 30 league goals .

To add more at Manchester United with forward thrust , he will contribute as Kagawa did at Dortmund last season completing 695 passes in the opposition’s half . More than any other of his previous Bundesliga team – mates.

On a less bright note with 3 games completed in a 38 match league campaign, Manchester United have not recorded a clean sheet .Which has to be a concern admirably achieving 20 clean sheets last season. With a makeshift defence on a variety of occasions. Mainly due to long term injuries to Nemanja Vidic , Darren Fletcher and Tom Cleverley resulting in the trio being absent for 412 days in total. As they each make their way back to match fitness I believe the defense will be less, well leaky.

In my view it was fantastic, no brilliant to see Darren Fletcher’s name on the Champions league squad sheet. Fantastic for Fletcher firstly, his family secondly and Manchester United.

Sir Alex Ferguson may have ensured his legacy remains intact at Manchester United , that was surely never in doubt. By investing in a 29 year old a huge transfer fee and wages outlay over a 4 year contract the manager has delivered the ‘ marquee ‘ signing we all craved for, to signal intent to win the Premiership title back from Manchester City.

Written by Editor
Pep Talks: Guardiola to replace Sir Alex Ferguson?
Could this legend end his career at Old Trafford?