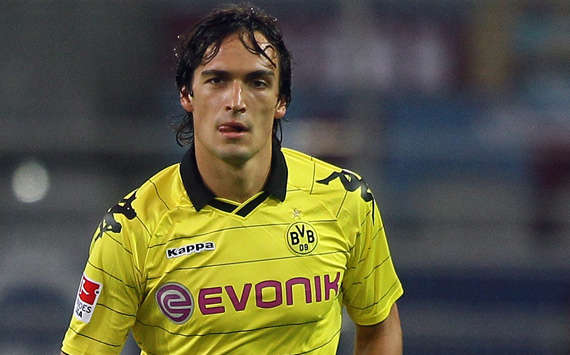 Mats Hummels refuses the idea to stay in Germany for the rest of his football career and is looking forward to move away to England or Spain if the right offer comes along.

The 23 years old German defender was linked with Manchester United and Barcelona before signing a new five-year deal with Dortmund in the summer.

“One day I will say that I am keen on a transfer,” Hummels told BILD.

“To play football in a new country would be flattering. I already had offers and one enquiry from these offers was really one of interest for me.

“But I told myself that the time is not right for such a move. There was a reason behind my recent contract extension. When you are a Borussia Dortmund player then you do not move to all clubs.

“In the Bundesliga it would just be about Bayern Munich, but this club has no shortage in my position. In Europe there are just about four to five clubs that would really interest me.”

is going to splash money to strength his age-ing defence.

Rio Ferdinand and Nemanja Vidic are getting old, while Jones and Smalling were regular visitors at the physio room! I think Hummels can be a good addition to the squad and Sir Alex won’t mind to add a young international defender to his team.

Although he may cause the gaffer headache in his weekly game selection, Hummels can be the new Vidic or Rio once they hang up their boots in two or three years. I also see him as an ideal partner for Jonny Evans whose form is peaking up game after game.

*I didn’t mention young defenders like Keane and Wootton because Sir Alex might keep them or maybe send them on loan next season.

Will United sign Dortmund defender on January or next summer?!

Will Manchester United Qualify for the UEFA Champions League

Will Manchester United Qualify for the UEFA Champions League