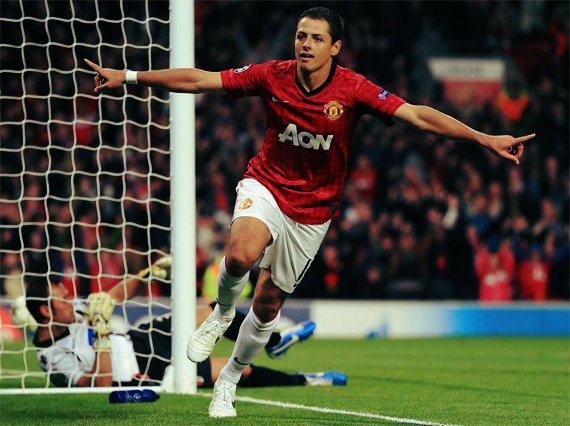 With the summer signing of Robin van Persie to add further ammunition to Manchester United attacking artillery in tandem with Wayne Rooney. There is a question mark over who is Manchester United third choice most potent striker.

Hernandez’s twin strikes in the Champions League game against Braga on Tuesday provided part of the answer, that the bargain buy Mexican still knows the route to goal. As Hernandez builds his upper body strength and adapts his game to the English Premiership, working on utilizing his electric pace, to lie on the last defenders shoulder to stay onside, and time his runs.

Almost every single United fan was besotted with Javier Hernandez on his arrival out of the blue, to Manchester United. We surely can’t be so fickle to now consider erasing the fabulous Mexican that took his first season in his stride banging in two score of goals.

The manager has asked of Danny Welbeck to add goals to his game this will surely come as the 21 year old learns his trade, to become more confident and ruthless in front of goal. Particularly as Danny Welbeck has the opportunity to work with and learn on daily basis from three proven International class strikers at United.

Perseverance is the key for Welbeck as he is at least 6 years away from his prime age to be classed as a deadly finisher, unlike Welbeck’s peers Rooney and van Persie who are hardened matured goal scorers.

The manager has fantastic options in the spear – head attackers, with 4 brilliant alternatives at his disposal .Only Hernandez the player who does not have the flexibility of Rooney, van Persie and Welbeck to add variety in his playing position being an out and out centre forward solely.

A poll on ManUtd.com after the SC Braga match, Javier Hernandez was selected by almost 4500 (89%) supporters as the man of the match, for his excellent brace. Receiving a standing ovation from the Old Trafford faithful when the Mexican was substituted near the end of the thrilling match.

Hernandez’s goals contributing to push United on to a 9 points tally in the Champions League group and within touching distance of progressing to the knock – out-stages with one more point from the three remaining games.

We must remember Welbeck did not cost Manchester United a penny in transfer cost, having been scouted by United from the age of six years old.

Javier Hernandez on the other hand cost Manchester United £ 6 million, a mere drop in the ocean, for a humble, professional team player of Little Pea’s quality.

Who do you think is Manchester United most potent 3rd striker Welbeck or Hernandez or just be absolutely delighted with United’s fantastic scouts??

6 thoughts on “Choose between Javier Hernandez and Danny Welbeck…Why!”