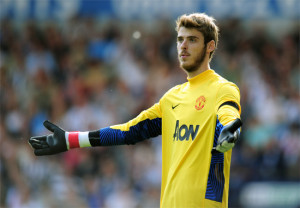 The answer seems quite clear. You would think the consensus would be two points dropped as Manchester United were ahead for most of the match. Miscommunication, a weak punch, and failing to close down Clint Dempsey spelled the difference between a draw and a win.  However, if we take a closer look, then perhaps we might reach a different conclusion.

In the second half, Spurs came into the game and began to stifle United in their half as they pushed for the equalizer.   Although Manchester United were aggressive in their play, we struggled to keep hold of possession and our lack of decisiveness in the final third meant we were only leaving White Hart Lane with one goal. Below is a summary of statistics highlighting the differences between the two sides.

Spurs had more shots, more corners, more shots on target, better pass percentage, and more possession. From this vantage point, you could come to the conclusion that Spurs were the much better team.  However, it is important to note that after taking the lead early in the first half, United seemed content to defend the 1-0 lead.  By doing so, it invited more pressure onto United’s defence and meant most of the second half was spent in United’s half.  Spurs had 11 of their 25 shots blocked which indicates the kind of pressure United encountered and how they dealt with it.

Another factor which has not been highlighted is David de Gea’s crucial saves as Spurs grew into the match.  Much of the spotlight has been on de Gea’s punch for Spurs’ equalizer which I will touch on later.  We must not forget some of the saves he made which preserved our lead.  Here are just a couple examples:

If it wasn’t for these saves and the others he made throughout the match, we would not be discussing how close United were to securing a victory. It is easy to forget these moments when United were so close to grabbing a vital three points and I am confident de Gea will come good for us and prove Sir Alex Ferguson was right for putting his faith in him.

According to some journalists in the media, de Gea is to blame for Manchester United dropping points against Spurs. Replays show that de Gea was in fact impeded by not only Caulker but also his own defenders.  While de Gea could have punched the ball better, due to the circumstances, it was the best he could do. Spurs goal indicates yet another situation where Vidic and de Gea got in each other’s way. If it continues to happen, United will concede goals.  Both players need to find a solution as the business part of the season is drawing very close and games will be decided by such fine margins.  If journalists wish to put the full blame on de Gea, they must also remember the goal resulted from Valencia and Rafael not being on the same wavelength.  It didn’t help that Dempsey was left wide open for a tap-in either.  Such details highlight United’s season from the back as that is now 30 goals conceded for the season. Sir Alex knows if Manchester United are to bring in any hardware this season, the defence has to improve and stop conceding silly goals.

Depending on your outlook, the result against Spurs could either be two points dropped or one point gained.  Credit must be given to Andre-Villas Boas for turning Spurs into a more cohesive unit.  He has made White Hart Lane a tough place to visit.  There’s no doubt United players & staff will feel robbed after conceding so late.  When Spurs equalized, the only thought that crossed my mind was, “So that’s what that feels like.”

With the gap now being reduced to 5 points, it’s important United respond with a victory and look to build some more momentum to keep our rivals off top spot. We also need to hit some before the momentous Champions League tie with Real Madrid.  A tie that rekindles the memories of past clashes between the two clubs.