Gündogan vs Fabregas: which player is best for United?

Over the past month Iker Gundogan & Cesc Fabregas have emerged as two of the fans favourites for a central-midfielder purchase this summer, both Cesc and Ilkay are fantastic players & would both contribute hugely towards United’s title campaign this season. But which player is best for United? 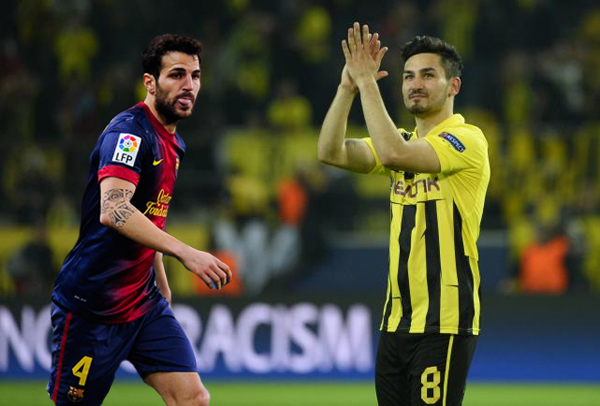 Over the past month Iker Gundogan & Cesc Fabregas have emerged as two of the fans favourites for a central-midfielder purchase this summer, both Cesc and Ilkay are fantastic players & would both contribute hugely towards United’s title campaign this season. But which player is best for United?

Cesc is now 26 & is starting to reach his ‘peak’ as a professional footballer, Cesc completed his move from Arsenal to Barcelona two seasons ago, though, he’s never really reached the level of success he wanted with the La Liga champions. Arsenal do have a first refusal on Cesc allowing them to stop any other club buying him, as long as they bring Fabregas back to the Emirates.
Barcelona have already let another world-class central-midfielder leave the Camp Nou this Summer, with Thiago Alcantara completing his move to Bayern Munich a fortnight ago. This would make any negotiations difficult as Barca would be unwilling to sell both players in the same transfer window.
Contract negotiations would also be hard, Cesc would be demanding wages of around £200,000 p/w which would match the wages of current top earner Wayne Rooney. Saying this, we all know what a fantastic player Fabregas can be, having already proving himself in the Premier League with Arsenal, he would almost be a guaranteed success at Old Trafford.
Cesc is a creative & stylish midfielder which could carve open defences easily & at 26, he’s an ideal age.
I’m sure most United fans would be licking their lips at the prospect of Michael Carrick linking up with Cesc Fabregas, it would certainly improve United’s title chances and would send out a big message to United’s title rivals & their fans that United wont give up their title without a fight. Cesc would certainly be classed as a ‘marque signing’ for the reds.

Ilkay has been a player who has certainly impressed at Borussia Dortmund this year & is another one of the fantastic young players to come thought the ranks at Dortmund. Ilkay isn’t one of the big names at Dortmund, players like Reus, Lewandowski & Mario Gotźe (now at rivals Bayern Munich) Ilkay would fit perfectly into United’s side & considering he’s only 22 years of age, he’s a fantastic option for United. He’d be available for around £25M (£12M less than Fabregas).
But some United fans think Gündogan wouldn’t be classed as a ‘marque signing’ This means Moyes would be put under press to make a ‘big’ signing along with the Gündogan purchase. Gündogan would be classed as a higher risk purchase as he is yet to be proven in the Premier League, which differs hugely from the Bundesliga.
Whichever way you look at it, both Fabregas & Gündogan are fantastic players and would be brilliant additions to the squad of current champions, though, with both players being so good, it would make it equally as difficult to achieve the purchase as Borussia Dortmund & Barcelona would be unwilling to sell their star players.
Gündogan Golazo against Bayern in German Super Cup