In our last piece on Moyes, we covered his playing career and how those same characteristics as a player carried through to his managerial days. We also highlighted a slight distinction between Sir Alex’s and David Moyes’ positions as players (striker and centre half respectively) which from a tactical point of view, may suggest Moyes has a different view for how Manchester United will set up in the future.

In this installment, we will cover some of the tactical differences & similarities between Sir Alex Ferguson & David Moyes and what we can expect from Moyes tactically.

Last season, Manchester United’s tactics remained relatively constant throughout the season.  Featuring a 4-2-3-1 with wide wingers, full backs given license to bomb forward, and the second striker instructed to come deep to assist the numerical disadvantage in midfield.  Below is a diagram which highlights our tactical observations from last season: 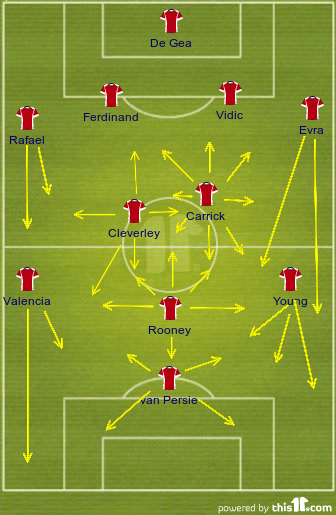 The beauty of such goals is no coincidence.  In a training session advertised by Manchester United, we get a slight glimpse into Ferguson’s philosophy.  An attacking drill was setup focused on attacking wing play and shooting.  In the first exercise, a midfielder and striker link up from long distances to practise long passing accuracy and long distance shooting.  Then the exercise is enhanced by adding two wingers and another midfielder-striker pair.  Now the wingers become involved in the build-up and cross the ball for strikers to finish (one-touch).

Another aspect of United’s play is shown through a 5v5 possession exercise with 1 link player for the team in possession.  Emphasis was on keeping the ball in tight spaces, playing short passes to get out of trouble and then playing a long pass to a teammate in space.  To expand upon this idea, in game situations, you would see where Rooney would drop deep to link up with midfielders, fullbacks or even the centrebacks. Then after picking up the ball, Rooney would find a wide player to exploit the space and advance the attack. His ability to play cross-field passes from deep allowed United to stretch the opposition on both flanks.

Part of the idea was to ease pressure, bring the opposition’s attention towards the midfield with the opposition’s focus on Rooney then quickly exploit the gaps out wide. This is why Sir Alex preferred his wingers to stay wide and why United would funnel their attacks to the flanks.  When executed with quickness and precision, it left the opponent exposed and a positional issue in both the centre of midfield and out wide (i.e. counterattacking goal against City at Etihad).

Ferguson’s attacking approach comprised of individual finishing technique, versatility in attack, accuracy of final balls, shooting speed and accuracy.  As we will see with Moyes, his plan seems to be more team-oriented.

From Michael Cox’s article in the Guardian, we learn David Moyes prefers to segment the training pitch to encourage players to cover space efficiently.

“One format involves the playing area divided into 24 equal squares, so the defence play high up the pitch, the wide players stretch the play, and the attackers rotate position.

Another setting has the pitch divided lengthways into six narrow bands of 12 yards each – the back four must occupy the nearest four “bands” when the ball is on one flank, then the middle four when the ball is in central positions. There’s also a strong importance placed upon positional responsibilities at transitions from attack to defence, with players ordered to organise themselves immediately, usually into two banks of four.”

To encourage players to regularly switch play, Moyes sets up a training exercise with a three-goal pitch.  If one goal is effectively covered by the opposition team, play is switched. It posed as one of the reasons why Everton were able to keep the ball more in the final third.  Combined with the segmented pitch exercise, you can get a better idea of Moyes’ plan.  He would use contrasting formations between teams in training matches to drum home the idea of covering open space while fluidly moving in attack.  It accounts for why Everton contained a solid shape even while attacking.

We also learn Moyes likes to win the midfield battle.  Apart from Fellaini’s goal threat and foul trouble, the Belgian was a nuisance for teams’ backline and midfield.  As the third midfielder, Fellaini would pressure the opposition from behind while the other two midfielders (Gibson & Osman/Neville) would apply pressure from deep, covering any lateral gaps.

(Note: Pienaar usually plays on left side with Baines)

So what should we expect from Moyes tactically as Manchester United manager?

(Note: Pienaar usually plays on left side with Baines)

From the above diagram, we should expect more of the same with hopefully more of an emphasis on midfield.  Moyes also prefers his fullbacks to stay wide and make runs down the flank instead of cutting inside like Evra has done throughout his United career.

Over the past few years, Manchester United’s midfield problems have been well-documented.

Using two deep-lying playmakers (Carrick, Scholes) became problematic as Scholes’ legs began to go. Not only did United encounter a numerical disadvantage in midfield, there was more separation between our midfield, forward line and defensive line due to a lack of proper cover.  If Scholes and Carrick pushed up too high, our backline would be exposed.  If they were too deep, our attack lacked support when the opposition effectively shut down the flanks leaving our forwards even more isolated.

When Cleverley came into midfield, his lack of experience and positional discipline meant our shape was less formidable.  Although he had some very good performances alongside Carrick in the first half of the season, rotation, injuries and inconsistency in overall play led to Cleverley having spells on the bench.

Jones presents himself as a good defensive option in midfield. However, his best position is at centre back and his  limited range of passing means he is best suited for tracking the opposition’s attacking midfielder (Bale at White Hart Lane, Ronaldo, Ozil at the Bernabeu).  Anderson’s fitness issues and Giggs’ knack for gifting possession to the opposition despite being United’s most creative player presents a problem for Moyes.

He already acknowledged United’s issues when he mentioned that the League Champions are “short in midfield”.  Questions also remain over how Kagawa will be used in the coming season.  With Rooney’s uncertain future, Kagawa needs to have a more influential season than his first as he struggled with injuries and adapting to the Premier League.  Whether or not he is played in his best position as a no.10 or used like Pienaar’s LW role at Everton, remains to be seen.

United fans can feel hopeful of seeing a more energetic Manchester United this season.  Throughout the pre-season, players commented on Moyes’ training techniques.  Although they mentioned not much has changed, they did mention the increased intensity in training sessions.

In the Community Shield, Michael Cox recognised United pressing high and winning the ball in the opponent’s half.  It led to van Persie’s first goal and looks to be a sign of things to come.  Where the work will need to be done is ensuring the players retain their shape while pressing and moving up and down the pitch as a unit.

It appears Moyes will expand upon Sir Alex’s ideas as he aims to take a side equipped with individual brilliance & flair and mold them into a team built to fluidly transition between attack and defence while maintaining a cohesive shape.

It will take time for the kinks to be worked out as the players adjust to Moyes’ tactical ideas.  However, we should feel hopeful as I believe we will see a Manchester United side that is compact, organised, energetic and purposeful as Moyes continues to put his stamp on the team.

Thanks for reading and check our website for our next installment on Manchester United’s new manager. David Moyes: The Manager.

1 thought on “David Moyes: The Tactician”