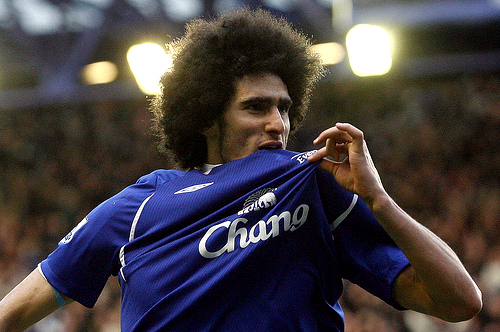 For many months now (especially since David Moyes was appointed manager of Manchester United) Marouane Fellaini has been mentioned as a possible solution to United’s long last central midfield crisis. Michael Carrick has nailed down a place in the Starting XI but with Scholes retiring, Giggs at 39 & the inconsistency of Cleverley & Anderson, United have been desperate to bring in a new central midfielder to bolster the Starting XI. United have already failed in attempts to sign Thiago Alcantara & Cesc Fabregas this Summer & with less than two weeks away until the end of the transfer window, it’s very important for Moyes to bring in a big name signing.

Fellaini is like marmite, some people love him, some people love him. He’s fantastic in attacking positions, he scares all defences when full-backs play diagonal balls across the box, he’s also particularly effective in corners, his height and strength, it makes it impossible for majority of defenders to mark him. The price tag is the main stumbling block, United would match his wages and I’m sure Fellaini would like to join Moyes at Manchester United.
Fellaini’s buy-out expired at the end of July (£26M) most football fans didn’t believe Fellaini was worth £26M, so this clause wouldn’t affect any bid from United. After having a £16M bid rejected today, most believe a fee of around £20M would bring Fellaini to Old Trafford.

United though, need an all-round midfielder who plays in the defensive-midfield role, even more this is Marouane’s favoured position, he’s failed to be clinical in these positions. The majority of United fans believe Moyes should be targeting midfielders like Modric and Ozil, though, Marouane would be available at a much lower price and would be a much easier transfer to complete.

Though, most fans at United, would like Fellaini to join United as long as we also go on to sign another midfielder (If Anderson leaves!).

3 thoughts on “Fellaini: Is he United’s midfield solution?”