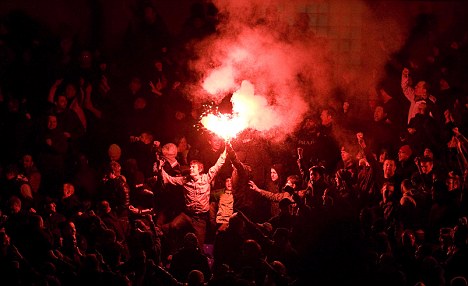 On Friday, we brought you views from a blue on the Manchester Derby.  Now it’s time to hear from some fellow Reds.

Due to their insightful opinions, we will split their views in two parts where you will hear from 2 fans in each article. For part 1, we have Rich Laverty (@JournoRich), a freelance journalist and a sharp tactical thinker in Marwan Saeed (@Marouane_MUFC).

What have you made of Manchester United’s start to the season? At first, fans were concerned about the lack of goal scoring and chance creation. The loss to Liverpool didn’t help yet our win against Leverkusen looks to have changed that perception. Do you feel the same way?

Richard: I’m very happy with how we’ve started, we have 7 points after a horrible start and we’re still level with Chelsea and City, neither of whom have looked like they’ll run away with it. We’ve looked much more creative with Rooney in the side and I think we’d have got something against Liverpool if he’d played. Overall, steady start but could have been a lot worse.

Marwan: I feel that we’ve had a decent start to the season in regards to the changes that the club went through & the summer frenzy. The loss to Liverpool was disappointing but it’s something that the manager will definitely learn from. I’m not worried. Against Bayer we looked a different Man United up until Fellaini was substituted. If we play the same way then we are safe.

What does the Manchester Derby mean to you? Do you remember your first derby match?

Richard: Unfortunately I’ve never been to a derby match but I remember the first one I watched. City had just come back to the Premier League and United won 1-0 at Maine Road thanks to a Beckham free-kick. I was still young and didn’t truly understand the rivalry but I could see it meant a lot to the players.

Marwan: I remember my first derby, it was when we won 1-0 back in 2006-2007 I think with Ronaldo slotting home a penalty. It means a lot to me specially with the rise of City in the past 4 years. I’ve become more aggressive towards the team partially because the nausiance that was Mancini with all his mind games. Of course the 6-1 win didn’t help either. I’ll never forget how I celebrated when Rooney scored that overhead kick!

What do you think will be Moyes’ biggest challenge this season? Personally, besides winning the title, I think handling squad rotation, keeping players happy whilst picking up good results will be a new challenge for him.

Richard: I think his challenge is keeping people off his back. Whenever we drop points the press and some of the fans will be on him but he’s done well so far, a result on Sunday would be massive for him, a loss isn’t going to decide the title this early but no doubt some people will be talking about his away record again.

Marwan: I think his biggest challenge would be surprising the fans & the owners. Expectations are surely not of Man United standards this season so doing that will win him a lot of plaudits. Also handling Chicharito, Kagawa and Rooney the right way.

How do you feel Moyes has done so far? Tough start fixture-wise.

Richard: I think he’s done well, transfer window aside. Swansea was a great result and I think the team were really unlucky against Chelsea. We didn’t play awfully against Liverpool and we’ve had worse results there recently. Palace was a steady result and things came together nicely against Leverkusen. Fellaini made a real difference and the team seem to be getting more used to DM’s set up.

Marwan: I feel he’s done fantastic. We already have a trophy, won his first UCL game, dominated against Chelsea, handled the Rooney situation perfectly & apart from the loss against Liverpool, I’d say there are no negatives to be taken.

How do you rate our chances both domestically and in Europe this season? Quarter finals in the Champions League?

Richard: Domestically I think we have a great chance. As i said, Chelsea & City haven’t looked anything special so far and again I think it’ll be City who push us furthest as opposed to Chelsea, despite Mourinho. Liverpool have had a great start but whether they’ll keep it up or not remains to be seen, same with Arsenal & Spurs. I think genuinely there are 5 or 6 teams who could win the title but it’s way too early to say who.

Europe’s a good test for Moyes but it’s hard to say how far we’ll forget, past the groups it’s just the luck of the draw. I think QF’s would be a target, he’s made a very solid start too.

Marwan:  Let’s not forget how strong this squad is. This is a squad that’s full of national team captains & champions. People tend to forget that. Whether there is a new manager or not, this team can basically reach far with a novice. I think we are capable of reaching the Semi-finals at least. In the league I would say first or second. Whether that happens or not will be down to injuries, player form & a bit of luck!

Do you go through any pre-match rituals before making the trek to the stadium on derby day? Even if you can’t attend the match, do you have a certain routine?

Richard: As I said, I’ve never been but when at home I don’t really have any routine. Always a bit more nervous so I just try and pass the time, listen to music, watch highlights of old games etc.

Marwan: Not much of a routine as I always wear my United tops and go down to a local cafe with the lads really.

Who will be the big players for United this season? What do you make of our new signing? Fellaini has only been here for two weeks and already seems to be a bit of a cult hero.

Richard: Fellaini will definitely be a big player. With both him and Carrick in front of the defence we looked really steady and we’ve kept the ball much better in the last few games, it was definitely something we lacked last season.

Even without Fellaini we’ve defended much better from the 3-2s and 4-3s of last season and I think the fact Rio & Vidic have played consistently helps that so they’ll be big too. Antonio Valencia showed what he can do against Leverkusen and Wayne Rooney has come back like a new player. Van Persie will score the goals too and I hope Nani & Kagawa can come back in and make an impact too.

Marwan: I’ve wanted Fellaini at United for the past 3 years now, a lot of people attacked him. After all he’s not the fanciest on the ball nor has he got a range of passing that will split defenses but he offers something that we have lacked for many years now. People will realize how important he was for us come the end of the season. I’m 100% sure of it. I’d say our star players will be Carrick, Rooney & van Persie.

There’s been a lot of attention/unnecessary press on Kagawa’s situation. Are you worried he may not feature in Moyes’ plans?

Richard: Possibly, but I think he does like him, it’s just difficult when you have someone like Rooney who plays the same position. Unless Rooney or RVP are injured Kagawa’s either going to be on the bench or on the left. I hope he stays and features regularly and as the games pile up I think we’ll see more of him but Welbeck also seems the preferred option on the left in big games for his energy.

Marwan: I’m starting to get worried to be honest. Borderline panicking. I’ve always thought he can be better than Mesut Ozil but the way he’s featuring for us, that won’t happen anytime soon. I think Moyes should do something about it as soon as possible.

There was so much speculation surrounding Wayne Rooney this summer. He looked set to leave after the “angry and confused” statement but he’s still here and playing well. How do you feel about Rooney playing for another season at Old Trafford? Has anything from this summer or the season changed your view of him?

Richard: I never changed my view of Rooney, not even in 2010 when he first wanted to leave. At the end of the day, it’s a job, not a relationship. If he wants to leave who are we to say he’s wrong, many great players wanted to leave United, Ronaldo included. I’m glad he’s still here because he’s a fantastic player but once he moves on we’ll find someone else.

Marwan: I’m an admirer of Wayne as you know. Certainly his actions in the summer weren’t top notch but it’s hard to say what really was happening behind the scenes. I’ll still support him as long as he wears our colors so that won’t be an issue for me.

Who makes your top 4 this season? Who do you have getting relegated?

Richard: So close but I think the top four will be the same as last season but I genuinely couldn’t predict it. I think Palace and Hull will go but it’ll be really close after that. I think Fulham & West Brom will struggle and Sunderland will be right in there too. At the moment, I’d probably say Sunderland.

Marwan:  My top 4 would consist of United, Chelsea, City & Tottenham. I believe an injury to Giroud would hurt Arsenal bad.

I think Palace, Hull & Sunderland will go down.

Thanks for reading and check our website for Part 2!!

1 thought on “The Manchester Derby: Views from the Red Half of Manchester Part 1”