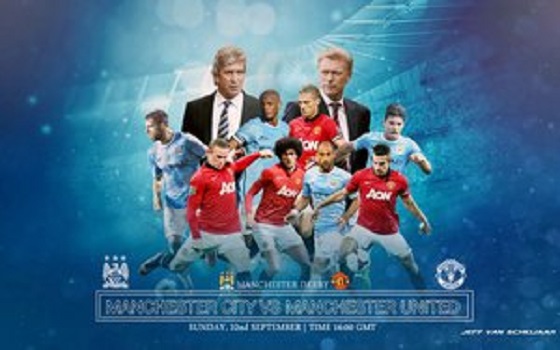 With the Manchester Derby looming, the banter between United and City supporters intensifies as this derby matchup looks set to be a tense affair.

City haven’t been in great form in the league. 2 home wins, an away loss to Cardiff City and a hapless draw against Stoke. The only redeeming factor for City fans is a good away performance in their first match of Champions League group stage against Viktoria Plzen. Aguero, Dzeko and Toure getting on the scoresheet only bodes well for City as they will look to a big performance from their star players.

For the red half of Manchester, things are looking quite good. David Moyes has inherited Sir Alex’s squad and is encountering one of the toughest opening fixtures Manchester United have faced in quite some time. An away trip to Swansea, Chelsea at home and Liverpool away is not the ideal set of fixtures for the new manager of Manchester United to start out with. Yet, United have managed 7 points from the first 4 games this season which considering the opposition, is a very good return. Especially with the presence of a new manager who is getting accustomed to the team as the players are getting accustomed to him and his demands. The recent resurgence of Wayne Rooney’s form could swing the balance come Sunday afternoon. Keeping Rooney was the club’s top priority and it appears the Englishman is approaching his best form in years with a commanding performance against Leverkusen midweek.

Here on TrulyReds, we welcome views from our opposition. Today, I had the pleasure to speak with a good friend of mine who happens to be a City fan. In the following interview,Neil (@CityNeil69) highlights what the Manchester derby means to him and what he expects from both sides on Sunday. Be on the lookout for our next piece on Saturday which will feature views from our very own fans. Enjoy!

1) It’s not been the best of starts for you, losing to Cardiff and drawing with Stoke. Are you feeling a bit concerned?

Dropping points at places you expect to win is always a concern, but given the injuries to Kompany, Nastasic and Clichy and the bedding in of a new manager and 4 players, 7 points, level with UTD and Chelsea is not too much of a worry.

2) What does the Manchester Derby mean to you? Do you remember your first derby match?

It’s a horrible day for me, to be honest the Derby has been our “cup final” for most of the years I’ve being watching City, so its always meant “everything”. Hard to shake those feelings. My first will have been a 0-3 loss at home in 1985. Thankfully, in more recent years we have a decent record against you.

3) You refer to yourselves as the people’s club but surely this perception has changed now with your recent influx of cash. I would argue the soul is no longer there. It’s all about business now.

I think City are trying hard to remain close to its local supporters, but you are right, overall the emphasis is on finance generation. In order to remain competitive, clubs seek to “monetize” every element of its local and global fanbase. Soul is becoming a thing of the past.

4) What have you made of Pellegrini thus far? Us Reds found it a bit ironic with videos going around with City fans chanting “You can stick your Pellegrini up your arse” Seems like Mancini is a bit of an afterthought now.

Jury’s Out still on Pellegrini, hard to tell what impact he’ll have after 5 games. The video you refer to was a handful of drunks at the cup final, bear in mind Mancini was the manager and all we had were rumours of him being replaced, its natural to support your manager.

5) How do you rate your chances both domestically and in Europe this season? No excuse for not progressing to the knockout stage this time.

We’ll win the league !!!! I’ve seen nothing to suggest any team will run away with it this year, so confidence is high.

A great result in Plzen this week has also settled the Champs League nerves. Yes we will progress this time, as you say no “group of Death” excuses this time. Id be happy with a decent knockout stage draw and a place in the quarters.

6) Do you go through any pre-match rituals before making the trek to the stadium on derby day?

Yes, its always helped to go into town and have a good few beers. Too many beers on most occasions, reminisce with the chaps about previous derby wins and instill an unbreakable confidence.  Beer works well.

7)Who will be the big players for City this season? Aguero and Yaya are given. Your new signings haven’t quite bedded in yet.

Silva and Kompany, as we’ve seen already, are huge players for us. Navas looks to have the pace and width we’ve lacked and Negredo looks very suited to the premier league.

8) Who makes your top 4 this season? Who do you have getting relegated?

Top 4 is hard to call this year, I think it will be really tight as Liverpool and Spurs have bought well and look decent so far. I predict

At the bottom I fear Palace and Cardiff wont have enough about them to survive and Sunderland look very poor indeed.

I’d like Sunderland to go down actually, we never win there.

9) What do you make of United coming into this game? Moyes had a decent record against you with Everton and we look to be getting into some good form.

It’ll take more than one season for Moyes to ruin United, but you’ve not looked good so far, the Chelsea game was possibly the worst PL game of all time and Liverpool were deserving of their victory. However, I’ve learned that you simply can never dismiss United. Your lads will be up for this game, last years win at City (thanks for hiding Samir) was the catalyst that took you on the title.

Given the way we’ve both played so far this year, I expect a poor game, neither team wanting to lose, a point will be what Moysie is chasing and he’ll set up to ensure you don’t lose. 2-1 City. Rooney sent off.