Why David Moyes Should Reconsider the Use of a Midfield Two 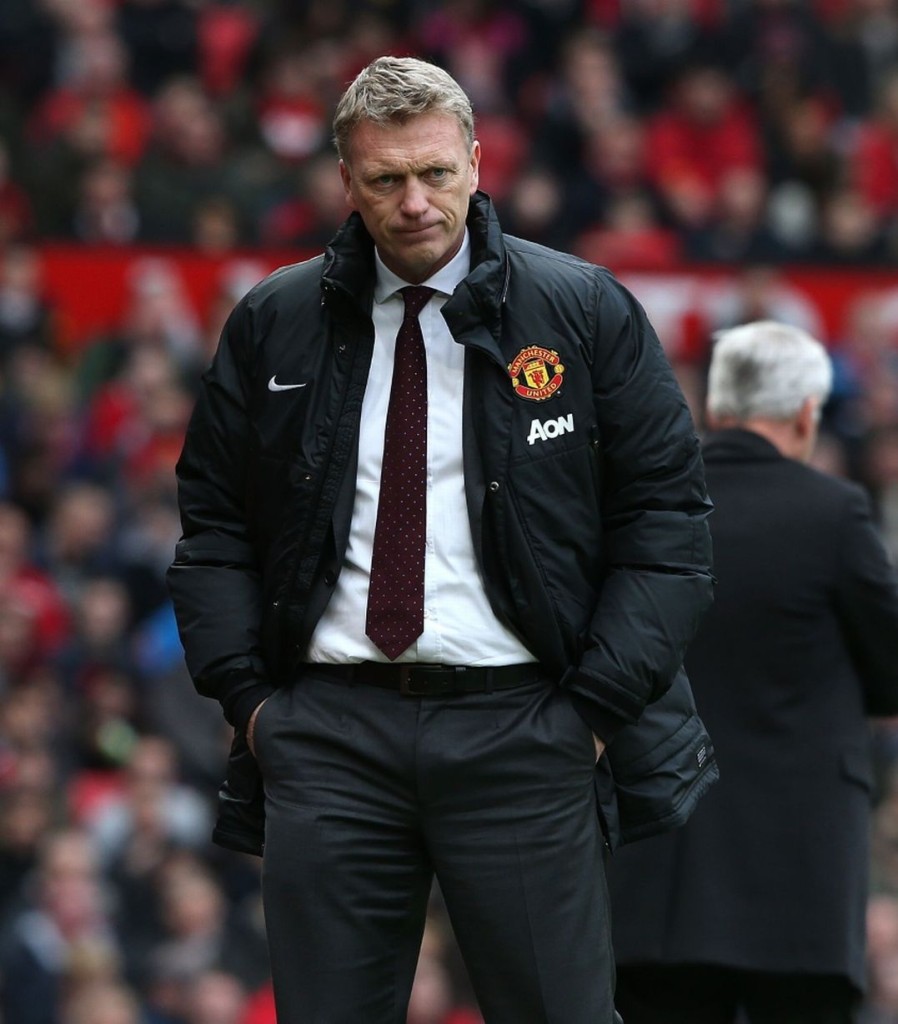 Another game at Old Trafford, another embarrassing loss.  The Red Devils fell further down the table and further down title race contention.  If you asked the majority of Manchester United fans in August where we’d be at this current stage of the season, how many would paint a picture as bleak as this?  With confidence low in the United camp, David Moyes must find a way to rekindle the fire and fighting spirit before United’s season gets any worse.  With no Carrick in midfield, Moyes must also find a temporary solution to patch up an already vulnerable midfield where there looks to be no solution bar dipping into the transfer market. 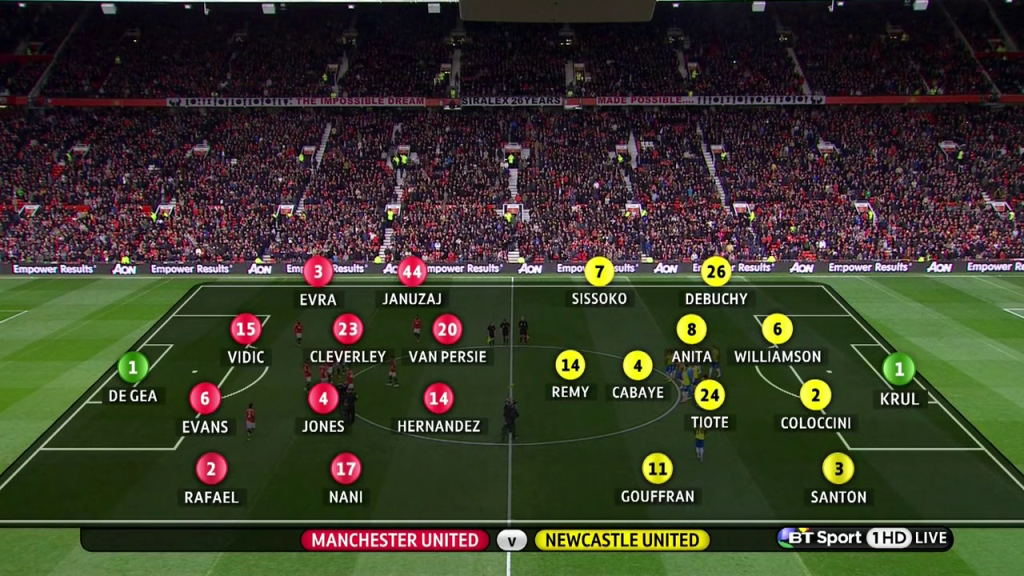 The starting formations held true for each team throughout the match.  Occasionally, van Persie would drop to help in midfield and offer a passing outlet to the CMs. Cabaye sat behind Remy ghosting through United’s lines of defense while Gouffran & Sissoko maintained width, drifting in and out of the halfspaces (described here)whenever Cabaye needed support breaking down United in the wider central spaces.  Both sets of wingers on either team switched wings as Moyes & Pardew searched for probing angles to break down the stubborn defenses. 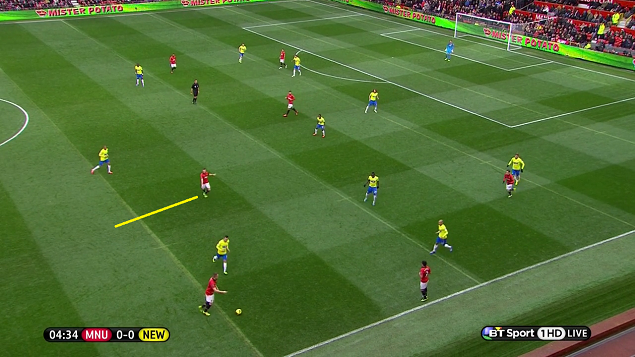 Cleverley is gesturing to Jones that he should pass back to Evans.  One has to question why Tom couldn’t have moved himself to a more helpful position (yellow line).  Arguably, if Jones passed to Evans with Evans providing a quick pass to Cleverley, he would be in a decent position to advance play. However, when Jones passed the ball back, Newcastle instantly pushed up and forced United to switch the play which proved troublesome as Newcastle already denied the Vidic the space to find Nani. 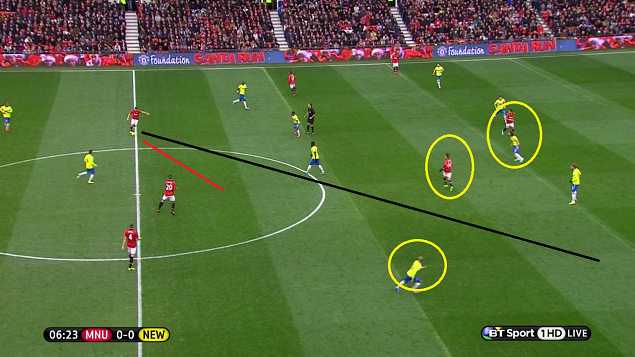 This situation highlights United’s insistence to use the wide areas.  Cleverley plays a good diagonal pass out to Rafael. It’s easy to see the sense in making this decision. Gouffran drops towards the flank as Cleverley makes the pass, Coloccini leaves space in behind for Hernandez to run into.  Although it’s not included in the picture, Rafael is in acres of space which is why Gouffran is dropping to recover his position.  Unfortunately, Rafael’s delivery into the box was easy picking and the chance was gone.

The red line shows an alternative that Cleverley could have used.  However, since he took an extra touch before making the pass, Cabaye had time to drop and make the passing lane to van Persie more difficult.  Nonetheless, the fact Cleverley wasn’t even perceiving van Persie as a passing option shows where United should at least consider tweaking the mindset.  Using RvP would have given Adnan (takes up a great position) a good chance of driving at Newcastle’s defense in what Moyes regards as his best position. 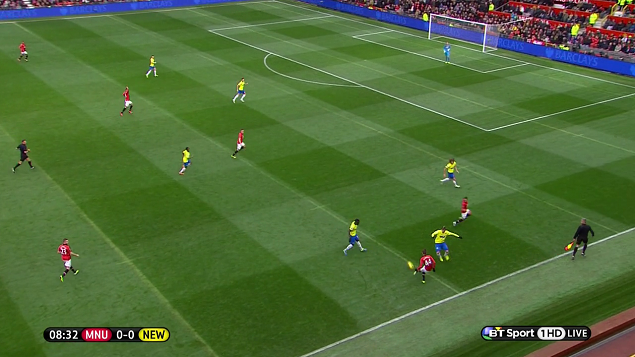 One of the few times Jones got forward in the whole match.  From Adnan’s pass, Jones had a decent shot on goal.  At the very least, this situation showed what United will need in the next CM they choose to bring in.  The shuttler (akin to box-to-box player)  joins the attack and uses timing of runs to exploit defensive gaps. Scholes was an expert at this and exemplifies one reason why he got so many goals with his head (i.e. 1-0 winner at Etihad). 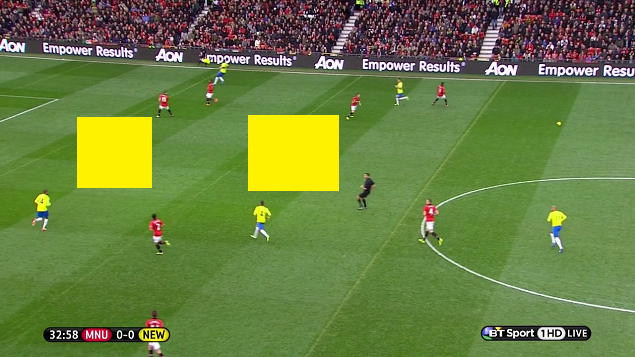 After Carrick’s injury, United have struggled in the league to maintain balance in defense and attack.  Jones is tracking back after a United attack.  The first issue here is Cleverley and Jones are so far apart. It highlights United’s lack of defensive solidity & balance without Carrick.  This was such a regular occurrence, I felt convinced that our CMs were being asked too much to do.

The rightmost rectangle resembles the area you would like your CMs to occupy to screen the opposition to one flank or the other.  Cabaye drifts into the space at the rightmost rectangle while Remy drifts into the space at the leftmost rectangle. The second issue is the disparity between United’s backline.  Evans (not in the picture-closer to half-circle of box) is much deeper than Vidic & Evra (near the 12 yard box). Why does he need to be so deep? Who is he marking?  The furthest forward player is Remy. Even if he’s trying to anticipate a ball over the top to Remy, it’s more important to be in line with the rest of the backline to create a wall of defense.  Because of Evra’s suspect defending at times, Vidic’s tendency is to overcompensate which can further open the gap between Vidic and his CB partner. If Jones & Cleverley had a third partner in midfield, I argue Jones would have less impetus to join the attack but would be more able to pick his moments rather than feel forced to join the attack out of necessity and comprising the overall balance of the team. 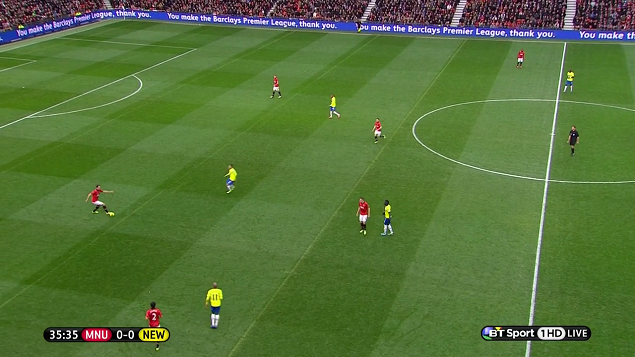 Another issue which crept into United’s performance was Cleverley & Jones not making themselves open when either Vidic or Evans were on the ball.  It made it easier for Newcastle to contain the play in midfield and keep play in front of them. It explained why the CBs would sometimes hoof the ball upfield. They literally had no passing options open to them.  Rafael should be wide as possible in this situation. Because he’s not, his body shape isn’t ready to receive the ball and see the play in front of him. Therefore, when he turns, Gouffran will have time to catch up and apply pressure.  In fact, this is exactly what happens as Evans plays the ball to Rafael. Rafael turns and Gouffran puts him under pressure and Rafael passes the ball out of bounds.

Cleverley also should be more demanding for the ball. Not sure if pointing to your feet is enough for your center back to know you really want the ball. 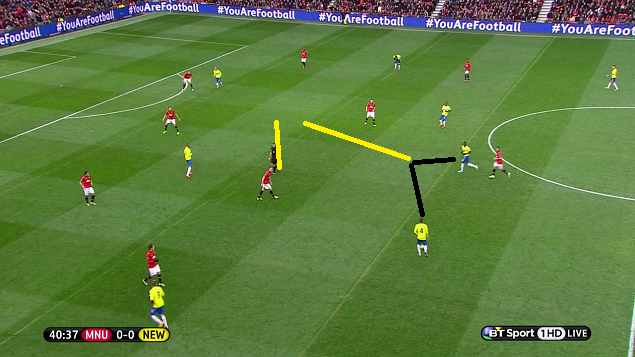 Once again, the space between Jones & Cleverley is already compromised.  It’s not all their fault though.  Jones is cutting off the pass to Remy.  Cleverley is making the pass to Anita more difficult.  Hernandez passively tracks Tiote’s run. Once, Cabaye passes to Tiote, Hernandez stops and both Jones & Cleverley have to quickly to react to Tiote’s run to prevent him from having a free pop from 30 yards out.  Jones gets over to Tiote to put off his shot and it goes out for a goal kick.  While Newcastle made nothing out of this situation, there’s a good chance a better team would have at least got a shot on goal.

What Moyes has attempted in other games is tucking the winger inside.  So Januzaj would be covering the passing lane to Remy and Rafael would adjust his positioning in case Cabaye chooses to attempt to release Santon down the flank.  Januzaj moving inward, encourages Jones to move inward as well giving less room for Tiote to run through.  However, this sort of gameplan was used against Leverkusen, a team not necessarily down for putting dangerous crosses into the box but using inverting wingers/wide forwards instead.  You can understand Moyes’ concern to make sure the flanks were well covered.  Now do you see why Sir Alex asked Rooney to play deeper last season? They knew his industry would help solidify midfield even if it meant he wasn’t as productive.

An Argument for a Midfield 3

Below are a few screenshots highlighting Newcastle’s ease of playing through our midfield: 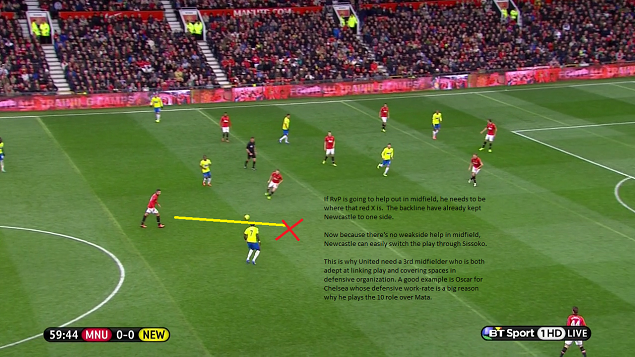 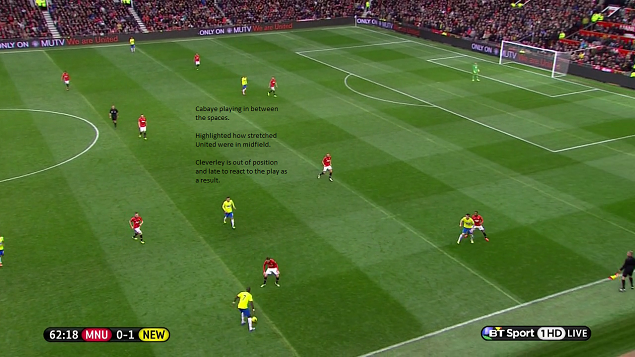 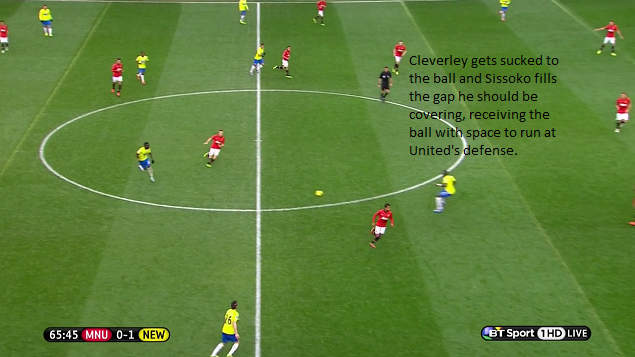 Below is an example of better midfield positioning: 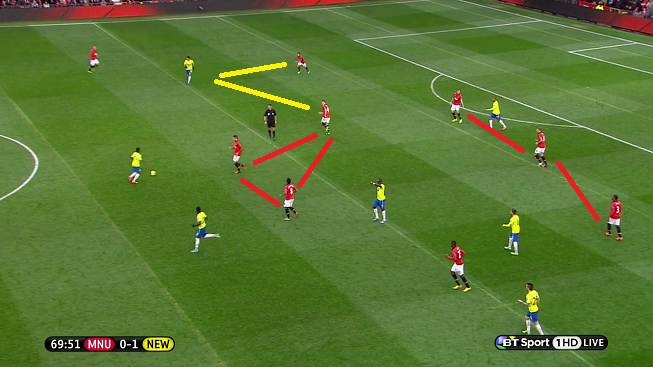 Anderson, van Persie and Jones form a 2-1 in midfield.  With Cabaye taken off, Newcastle’s play focuses on Ben Arfa.  This makes it easier for United to keep Newcastle to one flank, in front of them, and away from the space in between the lines.  As the yellow lines indicate, Jones & Rafael are both in positions to pressure Ben Arfa if Anita chooses to pass to him. Now, Newcastle have to take more time in building their attack, decreasing the likelihood of United being pulled out of position.  As the next screenshot shows, this shape didn’t last for long. 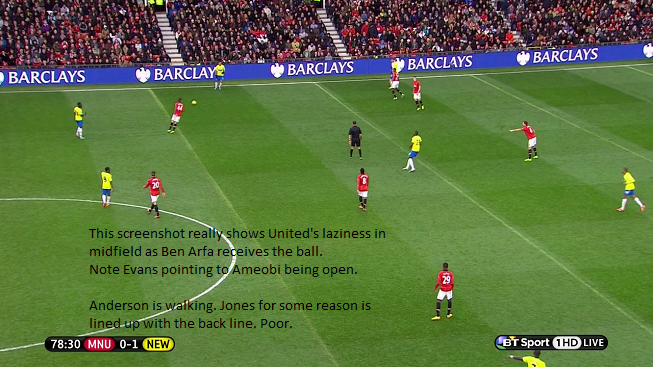 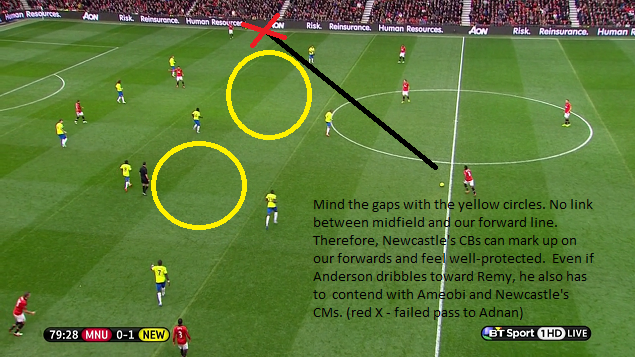 With no consistent link between midfield and attack, limited service to the forwards, and being continually stretched in midfield, I think it’s clear that until Carrick returns, we should move to a midfield 3 to equate the matchups in midfield and not leave our CMs with so much work on and off the ball.  We saw with Giggs & Fellaini against Everton that despite their positive play, it did little to discourage Everton from attacking the gaps voided by either midfielder.

Unfortunately, this means one of Rooney or RvP will most likely be dropped from the team.  Based on form, I would choose to drop van Persie as Rooney has had an awesome season thus far and he deserves to start.  This brings the dilemma of not starting our two world-class strikers. However, there are other issues we must be aware of.  Our wingers except Januzaj are not in form and not offering a consistent threat throughout the match.  As a result, our strikers are feeding on scraps.  van Persie is facing injury troubles.  Our unbalanced midfield is having a negative effect on our backline.  Last but not least, confidence is low throughout the squad.

Is it enough to hope van Persie and Rooney can carry us or should we be looking for a more balanced approach to stem the tide until Carrick returns to the fold? As I’ve argued above, I strongly feel we should take the latter option.  Giving the midfield pair an extra partner in midfield would match up against the opposition in midfield and a hopefully a reliable link between midfield and attack.  Whether it’s Kagawa or Rooney behind van Persie, either player will have to be more disciplined and monitor the type of runs they make into the final third.  Oscar is a prime example of a balanced number 10 who accepts the defensive tasks assigned to him.  Despite these defensive duties, he finds ways to join the attack, create space for his teammates through his movements and score goals.

Manchester United have been known for incessantly exploiting the wings with the archetypal 4-4-2 or using a 4-2-3-1 (variant of 4-4-2) for many years.  Perhaps, as a temporary solution, David Moyes will allow the use of 4-3-3 as he tries to pick up the pieces from two consecutive home defeats.  Something has to change, otherwise United are in for a very very long season.