Continuing from Part 1 , Part 2 discusses United’s performance against Everton in relation to use of possession in midfield, counterattacking play and defensive shape in  midfield.

United’s use of Possession in Midfield: 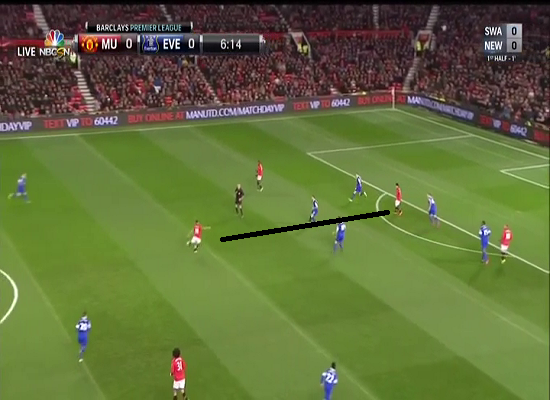 (Giggs’ positive play from the center)

Right from the off, Giggs didn’t waste time in playing a forward pass. Kagawa found himself in similar positions against Spurs but neither Jones or Cleverley took the risk in trying to find him.  Unfortunately, in this situation, Kagawa’s touch got the better of him and United conceded possession. These type of passes are so dangerous because they take the midfield out of the equation.  Below are some additional screenshots displaying Giggs’ ability to play probing passes in the center. 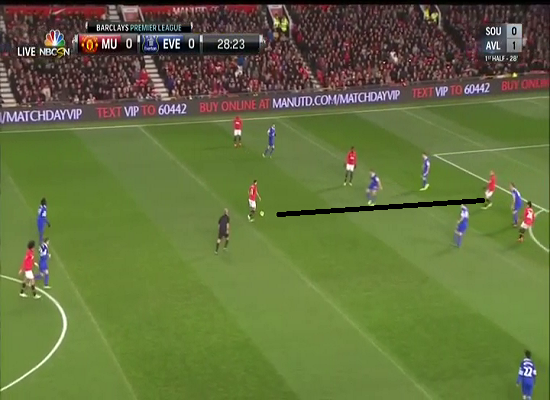 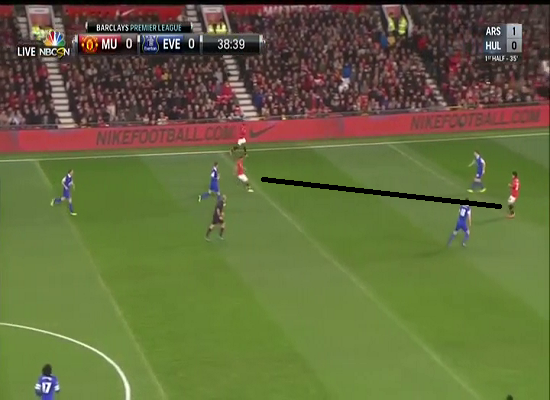 The key for United will be to be more decisive in these areas.  Although it is valuable to have a midfielder who can play these type of passes, it relies on the attackers to ask questions of the defense in these type of situations.  Hopefully, Moyes encourages the attacking players to be more aware of their teammates’ movements around the box or runs in behind.  It will help vary the attacks and make United’s offensive organization less predictable. 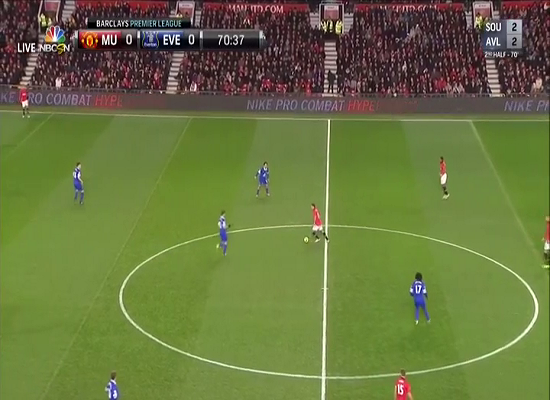 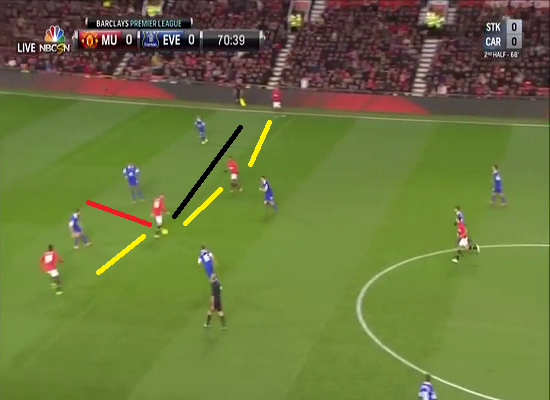 Giggs finds Rooney who is in space between Everton’s midfield and backline.  As a result, United have a 4v3 situation against Everton’s backline with their midfielders retreating to reduce the numerical advantage.  Welbeck makes a good run in behind Everton’s backline.  However, one of Rooney’s issues in central positions is his tendency to default to looking for the wide option first, playing it wide and then darting into the box waiting for a return cross.  Perhaps he is following Moyes’ instructions, but if Rooney had turned his body towards the goal when he received the ball, he might have spotted Welbeck’s run in time to slip him through (red line).  Instead, Rooney passes to Januzaj (providing a good wide outlet by staying close to touchline) and the resulting play ends up with Everton conceding a corner.  While playing this kind of pass is not inherently bad, it can be inhibiting to the overall team play if it becomes the default option. 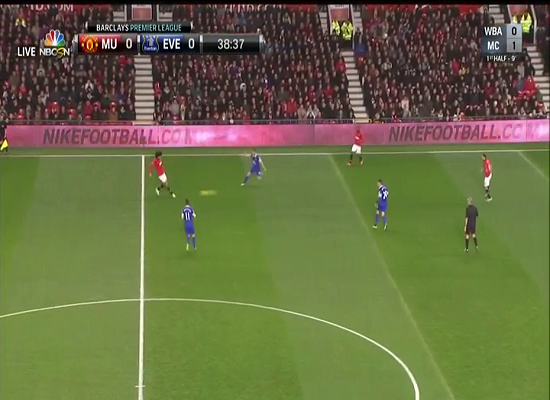 Fellaini had a decent performance against Everton.  Hassling players off the ball and intercepting Everton’s counterattacks. In comparison to his midfield partner, he was the deeper of the two.  This situation shows Fellaini playing a quick pass through to Giggs who then provides a pass to Kagawa  in a promising position.  This sort of play in midfield was missing against Tottenham.  Spurs’ midfield did a better job than Everton’s midfield in constricting the space in midfield, however, there were still gaps that could have been exploited which Jones and Cleverley chose not to venture into. 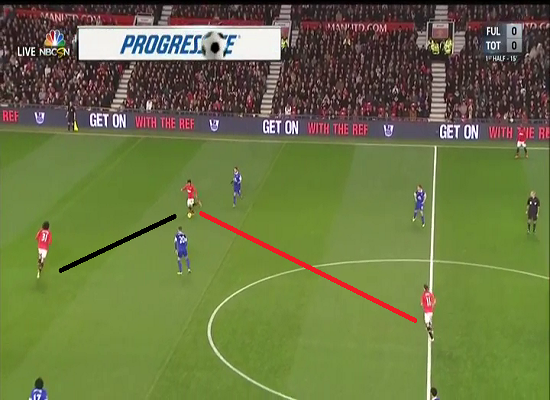 Kagawa has performed well in the Champions League for United this season.  However, he has not been able to translate the same performances to the Premier League.  He had a mixed performance against Everton and this graphic provides some insight as to why that was. The black line indicates Kagawa passing to Fellaini.  The red line shows Giggs checking his run to present Kagawa an alternative passing option.  For a player regarded as forward-thinking, it was surprising to see Kagawa choose not to pass to Giggs.  However, this is one instance and in other periods of the game, Kagawa was more involved. Let’s not forget the chance he setup for Welbeck towards the end of the first half with a great ball across the box.  He will need to be more positive in his play if he hopes to make more of a direct impact on the game and our build-up play.

Vidic has Rooney and Januzaj as passing options.  Giggs less so because he’s being marked by Barry.  Rooney is backpeddling which gives the impression that he does not want the ball in that position.  One way to augment the scenario in the first image is to have Rooney make a run towards the middle of the pitch (yellow line closest to Rooney).  It would not only cause McCarthy’s position to change but Barry would also be distracted by the run and it would give Giggs a chance to check back and get the ball from Vidic and advance play.

In the second image, Rooney (yellow circle) is no longer a good passing option and Barry is even tighter to Giggs than he was before.  Januzaj and Valencia are in good positions but since Vidic’s passing ability leaves a lot to be desired, he feels more comfortable playing the simple pass.  Hence, he passes back to Smalling (black line in second image) and play is recycled.  In this situation, it’s important for a player like Welbeck to sense the situation and provide an option for Vidic.  If he chooses to check back to the right, he could drop in the pocket of space between Everton’s CMs and defense, presenting Vidic with a pass through the middle.  If Welbeck chooses to go to the left to the pocket of space in between Barry & Pienaar, both midfielders need to cover that situation which gives Giggs some time to open up himself as a good passing option for Vidic. 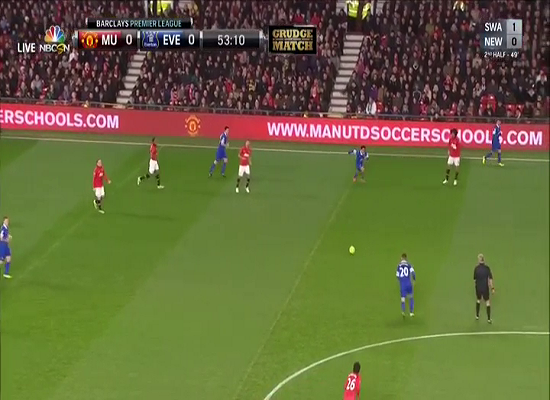 One of the reasons the game was so open was due to United’s defensive shape in midfield.  Although Fellaini made some timely interceptions, he has a habit of getting attracted to the ball.  Under Martinez, Everton are more comfortable passing the ball.  As a result, they can pass their way out of pressurized situations better then they have in the past.  Here both Giggs and Fellaini get attracted to the ball as Everton knock it about between them.  They leave a massive hole in midfield and now in Everton’s own half, our midfield is compromised and Barkley can collect the ball and drive at the opposition.  Fortunately, Everton were wasteful in the final third.  Better teams will punish United for allowing that much room. 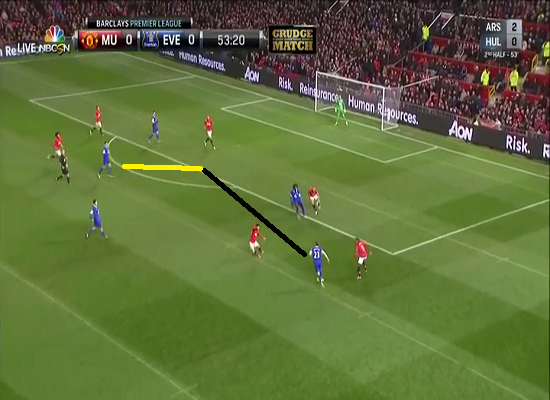 This picture is a follow-up to the previous one.  Coleman dribbles past Evra and is looking for options in the box.  Vidic is marking Lukaku tightly and follows him to the edge of the box to make sure he doesn’t get much time on the ball if he receives it.  Smalling has to shift over to vacate the space left by Vidic which means Rafael is now responsible for Mirallas. Fellaini recovers in time to put Barkley off from a clean shot on goal which leads to a scramble in the box before de Gea collects the ball.  This was one of the few occasions, where United’s defensive transitioning was slow. 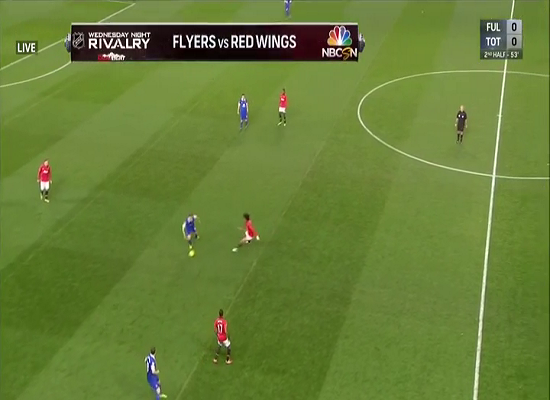 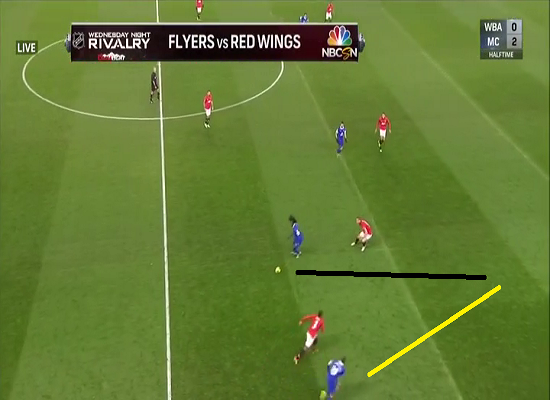 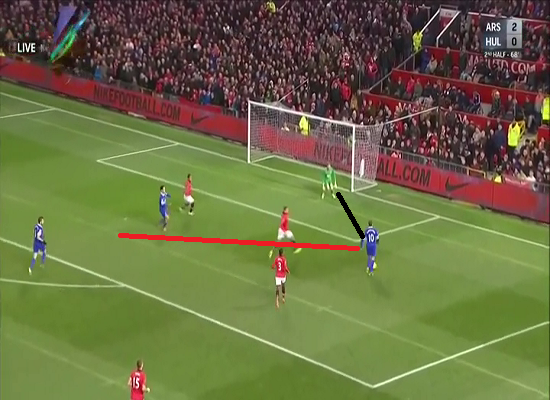 Once again, Fellaini gets attracted to the ball and leaves a void behind him which Lukaku sees so he checks his run to receive the ball (1st image). In the second image, Lukaku plays Deulofeo through on the flank. Evra got caught ball-watching and ends up behind the play.  Giggs is also ball-watching and not marking anyone in midfield.  He needs to drop immediately because Vidic moved up on Lukaku and Smalling will leave his mark (Mirallas) to try and contain Deulofeo’s run.  This leaves Mirallas free in the box as shown in the third image.  Fortunately, Deulofeu hits it straight at de Gea while he could have passed across the box towards Mirallas who was waiting for the pass or applied a much better finish. 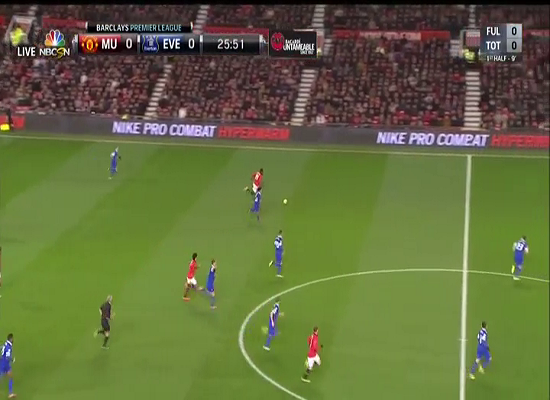 This picture illustrates why United haven’t been very effective on the counterattack in the league this season. Kagawa and Rooney’s runs are covered by Everton’s midfield.  In addition, they are running away from Welbeck so they have taken themselves out of the game at this point.  It seems the strategy is for the wingers to take on and beat the defender when the team is on the break and look to create openings with their pace.   However, the issue arises that United are not committing enough numbers to keep this counterattack alive.  Either Welbeck holds the ball up and waits for more options or continues to attempt to drive towards the byline.  Either way his options are limited, hence why this counterattack petered out. 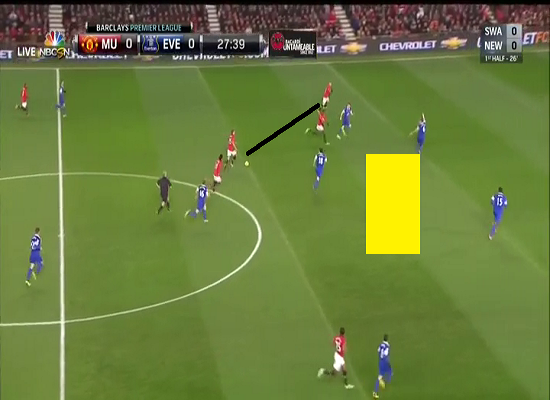 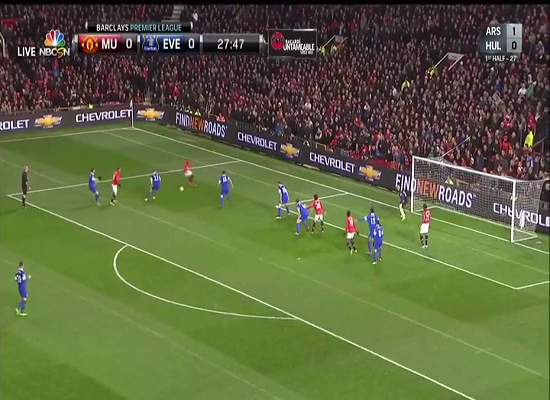 Kagawa got caught behind the play in this counterattack as Vidic plays the ball to Rooney after the England forward pulled wide to help build the attack.  Ideally, Kagawa should be where the yellow rectangle is located.  Valencia appears to be goal-side of Oviedo and in this instance, if Kagawa was in the ideal position, he would be able to receive a pass from Vidic and release Valencia towards Everton’s box.  The play ends with Evra trying to play a clever ball through a very congested 6-yard box. 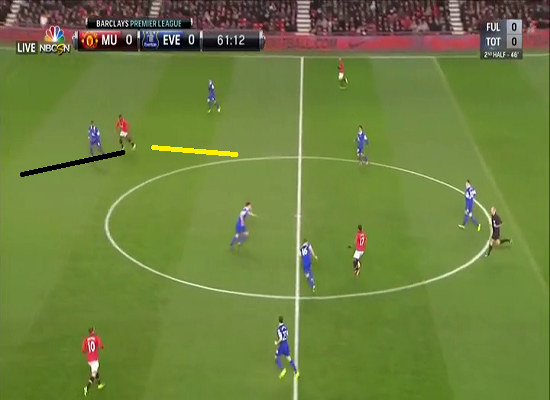 Here’s another illustration of United’s dysfunctional organization on the counterattack.  Rooney is in no position to support Nani and Coleman tracking back nullifies Rooney’s checked run.  Januzaj is in a decent position but it requires Nani get the pass spot on otherwise Everton can easily intercept the pass and counterattack.  The key here is that instead of checking his run (yellow line), Welbeck keeps darting forward (black line) as if he somehow expects Nani to find him from that position.  Credit to Barry and McCarthy for blocking the passing lanes and making it difficult for United to break quickly. 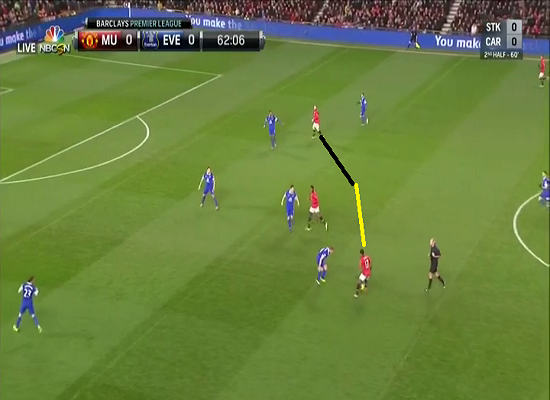 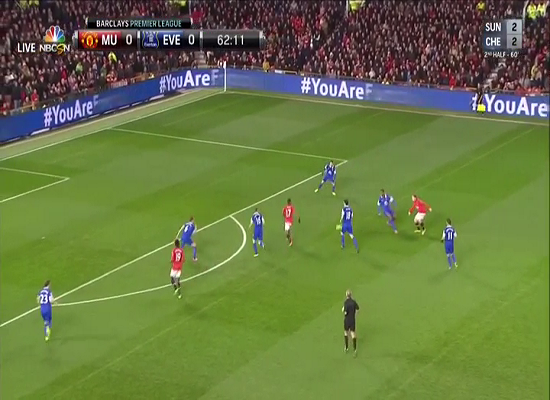 Similar to the previous counterattack, Nani is on the ball and the attackers are moving away from him.  At least Rooney or Welbeck should check back and provide a passing option.  Not doing so means the player on the ball has to either dribble past a player (risky decision in that position of midfield) or pass the ball sideways or backwards.  Nani was able to skip past McCarthy and find Rooney who then played a lovely return pass but Nani was quickly shut down by McCarthy.  Nani’s movement was the main factor as he continued his run after passing to Rooney.

Giggs’ ability to quickly spot and play the forward pass offers an alternative route of attack for United’s offensive organization.  Although, in games where the play is stretched (end-to-end) or very tight, Giggs’ effectiveness is reduced.  In stretched games, Giggs has more ground to cover which means there will be times where gaps appear in central midfield.  In tight games, his risky style of play hinders United’s ability to maintain possession.

The challenge for Moyes is finding the right balance in midfield that complements the attacking players and maintains our defensive shape.  On counterattacks, the front 4 attacking players are not always enough to establish an effective counterattack.  Forwards need to be willing to check back to provide supporting angles for any player that is on the ball.  Therefore, Moyes will also have the challenge of finding the right combination of attacking players that offers positive movement in central areas and penetrative threat on the flanks. With the January transfer window only a few weeks away, interesting times are ahead as Moyes looks to improve the squad.