For the majority of Sir Alex’s reign at Manchester United, attacking football was the overriding style of football which kept the United faithful begging for more.  Over the last few years, Fergie’s United has become more functional,effective and pragmatic.  As Moyes looks to prove himself as United manager, let’s take a look at some of the areas that will need tweaking if Manchester United are going to return to more fluid,attacking football. Part 1 focuses on United’s match against Tottenham at White Hart Lane. Part 2 will focus on United’s match against Everton. 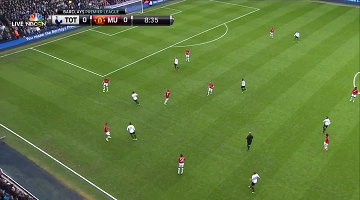 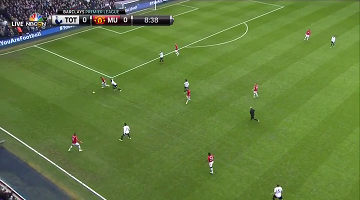 (Possession out of the back)

As you can see in the two photos above, United struggled to offer good passing options to the player on the ball (Evans) in reaction to Spurs’ high pressure early on.  Cleverley should be checking back towards Evans while Jones should orient his positioning to form a passing triangle with Evans, Cleverley and another with Smalling and Valencia. Evans is forced to punt the ball out of play as a result. Spurs set out to use this early domination and pressure in high areas to establish control of the midfield. 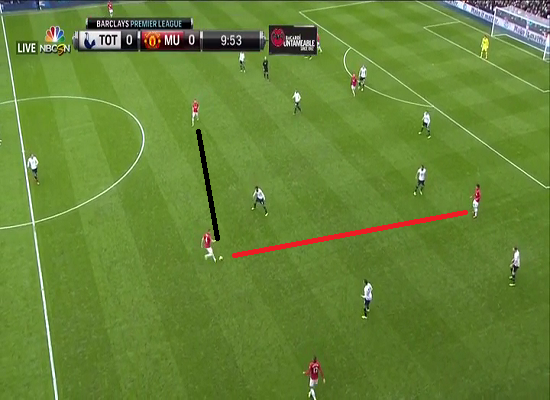 Jones has the option to pass to Kagawa (red) or Cleverley. Since Jones isn’t really a great passer of the ball, he elects to pass to Cleverley instead (black line). Passing to Cleverley makes it easier for Spurs to contain United’s play because the buildup is in front of them and they don’t have to worry about adjusting to a situation where United’s attackers are pulling them out of position. A pass to Kagawa in this situation draws immediate attention from Spurs CMs and backline because he is positioned in between their midfield and defense.  It also gives Rooney space to make a run in behind as the opposition would be focused on cutting out Kagawa’s threat. 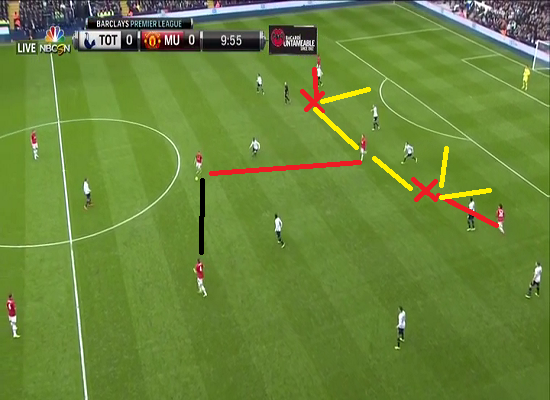 Cleverley has Jones and Rooney as passing options. Although the pass to Rooney would be a more difficult pass, it shows the mentality of United’s midfielders who didn’t attempt many forward passes through midfield.

Also if Rooney does receive the ball in this situation, Kagawa and Welbeck are not in a position to support him as Chiriches is following Rooney’s run making both Kagawa and Welbeck offside. The X’s denote where Kagawa and Welbeck should be and what options they could present at that position. For example, Rooney gets the ball and decides to pass to Welbeck. Welbeck then either can play a 1-2 with Rooney or try to open up for a shot on goal.

The black line indicates the action Cleverley actually took as he passes the ball to Jones and the attack is funneled wide. 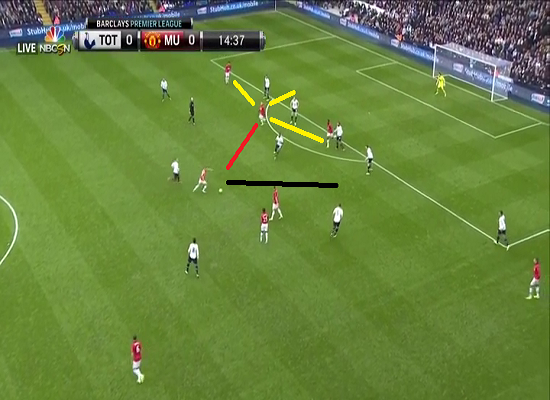 Cleverley feels pressure from Soldado and has a split second to make a decision. Rooney drops to provide a passing outlet for Cleverley but the United midfielder instead chose to dribble and pass the ball wide to Smalling. Play was then recycled to the other flank as United attempted to probe Tottenham’s defense on the flanks. If Rooney did receive the pass from Cleverley, he would have 3 options (denoted by yellow lines):

1. Take on Dawson and attempt a shot on goal
2. Pass to Welbeck for a potential give-and-go situation
3. Pass to Kagawa and then make a run in behind Spurs’ backline 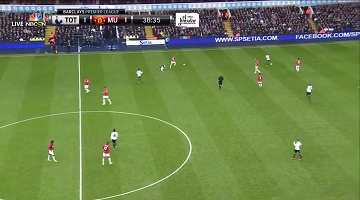 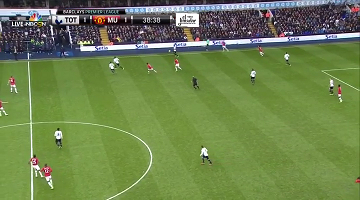 In the first picture above, Cleverley is dribbling towards the left flank with 3 passing options in Evra, Jones and Kagawa. Surprisingly, he takes an extra touch before attempting to pass to Kagawa and allows Walker to intercept the ball even though he already has passing options around him. This kind of hesitancy on the ball is not isolated to Cleverley.

It also occurs with Jones, Fellaini and sometimes Carrick.  The tempo in the EPL is quite frenetic so players have to make split-second decisions.  However, being able to spot the pass and play it quickly is an area where United’s midfield needs improvement.  It’s in these split-second decisions which can decide whether there’s an opening in the opponent’s defense.

The second picture shows Spurs on the break after the interception of Cleverley’s pass.

This situation highlights the concept of players seeing the pass but not having the confidence to execute it (in this case Vidic).
Welbeck is in a decent position to receive the ball.  In the sequence of play, he is actually jogging backwards so for this situation to work he would need to remain stationary (where he is now). If he does receive the ball from Vidic, he has a few options available to him:

1. Lay ball off to Cleverley who can either lay off the ball to Rooney, Kagawa out wide or play the return ball to Welbeck.
2.Try to beat Chiriches on the dribble (who will be drawn to Welbeck when he receives the ball)
3. Play pass to Jones and create wide overload with Valencia

Vidic instead plays a long ball to Valencia and United’s attack eventually peters out. 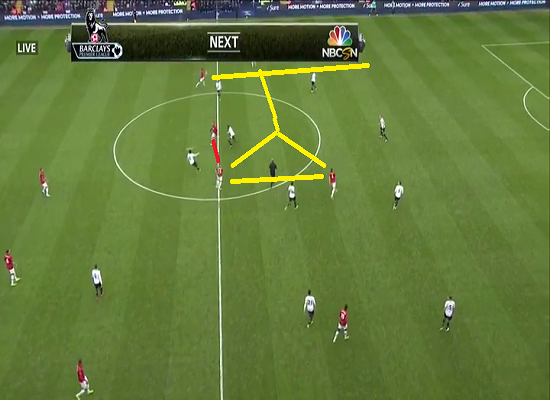 In this situation Rooney is passing back to Vidic as he is under pressure.  Although United have maintained possession, with play being recycled through Vidic, Spurs have more time to reorganize their defensive shape. The Paulinho, Sandro, Dembele trio made it difficult for United to have any joy in midfield. United then reacted by attacking via the flanks (mainly down Valencia’s side). In order to play through midfield, United needed to play quick passing interchanges.

The above picture shows a possible scenario of how to accomplish this. Instead of passing back to Vidic, Rooney would pass to Cleverley (red line) who would either pass to Jones or fill the gap left by Sandro and dribble towards Spurs’ backline. If the ball goes to Jones, Jones knows he can’t take on Spurs’ backline by himself so he would pass back to Cleverley who would pass to Kagawa on the flank. In this picture, Evra starts his run from midfield. If he continues along the yellow line (with Kagawa on the ball), Walker will be forced to track his run which gives Kagawa the option of attempting to play him in behind or attacking the space left by Walker. 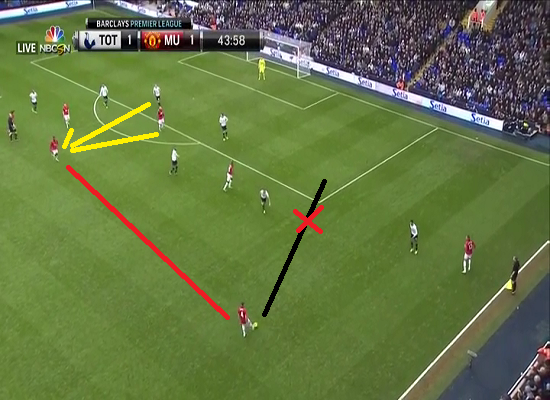 This above picture is another great example of our CMs’ focus on creating via the wide areas. The black line indicates the pass Jones made in this situation. The red “X” indicates that this pass was intercepted. Welbeck checks his run towards Jones which gives Jones another passing option (red line).  Let’s say Jones decides to pass to Welbeck.  Welbeck would then have a few options to choose from:

1. Play a first-time pass to Rooney
2. Turn, dribble and attempt a shot on goal
3.Lay the ball off to Cleverley

Based on the picture, option 1 looks the best as at this point in time, Spurs CBs are not tight on Rooney.  This would give Rooney about an extra second to adjust his position and open up his body for Welbeck’s first-time pass.  Jones’ pass to Welbeck would need to be firm otherwise, Dawson & Chiriches would have enough time to recover the situation. 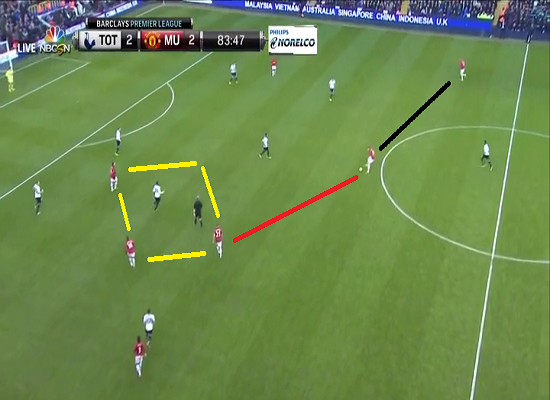 Here, Jones has received the pass from Hernandez and is going to pass to Smalling to switch the play (black line). This is another area where United need to improve because while switching play is useful, if it becomes your default option, then other avenues of attack will not be used.

Notice how Spurs’ CMs are all focused on Jones.  If Jones played a first-time pass to Cleverley instead of opening his body up to pass to Smalling, Spurs would be caught out. Hernandez’s tendency is to play the ball and then sprint into the box. While this is happening, Rooney would drop slightly closer to Cleverley’s position (who now has the ball in this hypothetical situation), collect the ball from Cleverley, turn and either attempt to play Hernandez through, wait for Cleverley’s support run or attempt a shot on goal. 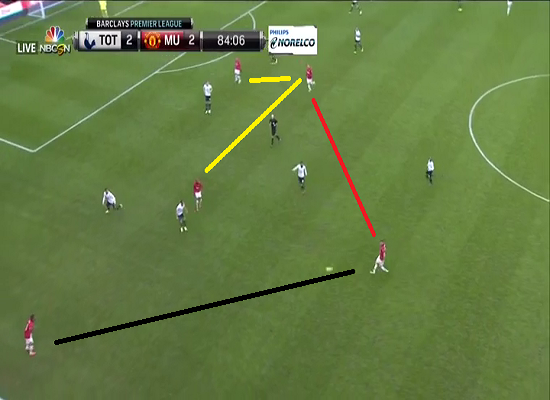 Young takes up an okay position between Sandro and Townsend.  Ideally, he would be further away from Townsend and a bit higher(closer to Spurs’ backline) than where he is now.  Nonetheless, Cleverley has an alternate passing option in Rooney but since it’s a more difficult pass, chooses to pass to Evra on the flanks. This was an opportunity late in the game to deviate from the game plan and try and ask a different question of the Spurs’ defense. Rooney is in a good position to either play Hernandez through, lay off the ball to Young who would be making a run towards goal, or take a shot on himself.

When United don’t get time and space in central zones, possession is circulated in wide areas in hope that the fullbacks or wingers can penetrate the opposition.  By not being more adventurous through the middle, United’s pattern of play therefore becomes predictable and makes it easier for the opponent to cut out crosses or balls into the box.  This is what occurred against Spurs and even though Valencia threatened multiple times throughout the game, his end product was not up to par which provided the other attacking players with very little service.

David Moyes can choose to continue with the same tactics but it’s paramount that United find a reliable shuttler willing to join the attack and probe the opposition through central areas.  Being able to attack through the center, does provide options to be more penetrative down the flanks.  As will be shown in part 2,  Giggs’ adventurous play can solve part of this issue.

Thanks for reading! Look out for Part 2!