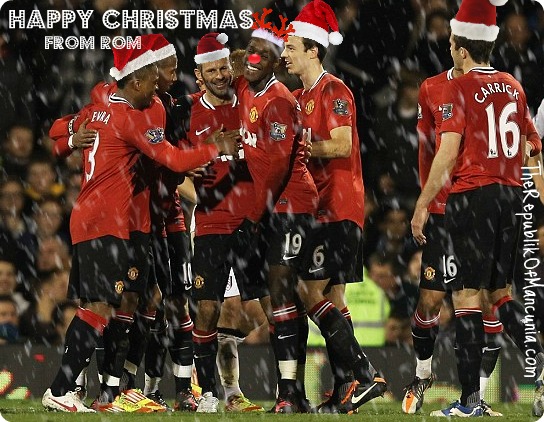 It’s that time of year again. With Christmas on the horizon, now is the moment to once again indulge in cheap chocolate, family arguments and far too much Wham! It’s also time to watch a hell of a lot of football matches.

With no winter break in sight for yet another year, the cohort of the Premier League’s increasingly weary teams stumble into the busy Christmas period hoping beyond hope that their league campaigns survive the demanding flurry of frost covered games scheduled for the coming weeks.

Yet for Manchester United, this could well be the month which turns their season around. David Moyes’ team face four eminently winnable games this month, all against sides below them in the table, despite their own lowly current placing. Wins in these fixtures – away to Aston Villa, Hull and Norwich and at home to West Ham – would provide the team with a powerful momentum going in to 2014.

Clearly, trips to Villa Park, the KC Stadium and Carrow Road are hardly straightforward match ups, especially for a United team who have already lost five league matches this season and have rarely resembled a team either prolific in attack or sturdy at the back. Indeed, it has been dread and unease, rather than enthusiasm and excitement, which have been the prevailing moods around the club in recent weeks.

Yet United must surely fancy their chances to emerge victorious from their upcoming games. Although Robin Van Persie’s injury is a major blow, Wayne Rooney’s return from suspension and the potential blossoming of his partnership with Shinji Kagawa give United reason to still be optimistic they can find the goals to successfully put their next opponents to the sword. If all goes to plan, United may also be able to welcome the injured Michael Carrick back into the centre of their midfield before the month is out.

Additionally, with the reaction to United’s recent defeats proving so fervent and unforgiving, Moyes may well appreciate a run of games away from the intense glare of Old Trafford.

In contrast, those currently leading the way in the league face tricky festive schedules. League leaders Arsenal’s next two games are away to ManchesterCity and at home to Chelsea, whilst they also face a trip to Newcastle on 29th November. Liverpool, meanwhile, play Tottenham, City and Chelsea before the year is out. For United, their difficult start to the season, which involved early games against ManchesterCity, Liverpool and Chelsea, has now made way for what appears to be a relatively straightforward run.

Despite the decidedly shaky start to the Moyes era, things could yet start to look a whole lot rosier for United if they manage to secure four wins from their remaining December fixtures. It’s a big if, of course, but in a season where every team has consistently dropped points, any run of wins has the potential to radically alter the makeup of the league table. In the midst of Christmas’ football carnage, United must knuckle down, keep their heads, and focus all their energy on picking up key victories. They could yet turn their year around.