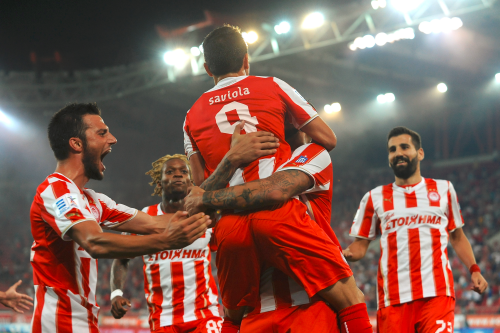 There can have been few seasons when the advantages of finishing top of your Champions League group have been more obvious than in 2013/14. Whilst Arsenal and ManchesterCity, who both finished second in their respective groups, drew Bayern Munich and Barcelona in the last 16, group winners Manchester United were handed what appears a far simpler matchup, against Group C runners-up Olympiakos.

But the current Greek champions could pose a more substantial challenge than many United fans expect. Just 15 fixtures into the new season, Olympiakos are already eight points clear at the top of the Greek Superleague, having scored 45 goals and conceded just four. Even at this early stage, they are on course to win their 41st Greek league championship.

Going forward, their threat is built around the talents of Konstantinos Mitroglou, an exciting Greek striker who is enjoying a prolific season. Behind him, he is ably supported by former Barcelona and Real Madrid prodigy and old school Championship Manager favourite Javier Saviola, who pulls the strings for his team in his Number 10 role. The pair netted five goals between them in the group stages.

But just how good are this team? The Greeks only just qualified from their group, requiring a win against eight-man Anderlecht to pip Benfica to second spot on a head to head record. They also lost both their games against Paris Saint Germain, the only considerable threat in Group C. Their European pedigree is relatively weak, too: since reaching the quarter finals in 1998-99, they have failed to even make it past the last 16 of the tournament. United have a 100 percent record against the Greeks, with a 4-0 thumping in the 2002/03 season their most resounding victory to date.

But are this United side good enough to capitalise on these weaknesses? Much has been made of how the Champions League has provided some much needed relief for David Moyes, who many expected to struggle in the competition. Indeed, United’s a 5-0 away win at Bayer Leverkusen, currently the Bundesliga’s second best team, remains the finest result of Moyes era to date. United’s Group A record was almost flawless, with the Reds finishing as undefeated group winners with plenty of goals to their name. Having conceded just three times, they possess the joint best defensive record so far in this year’s tournament and are one of just three teams to survive the group stage unbeaten.

On the surface, it’s difficult to identify just why United’s European form has been so superior to their domestic results. Perhaps it’s simply a matter of small margins: had chances gone their way, United could easily have picked up a good deal more points in the league. They could equally have ended up worse off in Europe, with their performances against Real Sociedad in particular both proving rather uninspired.

Perhaps European sides have been slow to pick up on a realisation that many English sides have eagerly started to embrace: United are not the power they used to be. Whilst teams such as Newcastle and West Brom have prospered from bringing the fight to Old Trafford this year, Bayer Leverkusen and Shakhtar Donetsk still looked intimidated by the reputation of the ground and the legacy of results that have gone before. United still retain an aura in Europe, a factor which may well prove enough to ensure progress to the quarter finals.

United’s players have been afforded more time and space in Europe than in England this year. Shinji Kagawa in particular has prospered away from the fast and physical nature of the Premier League, and is one of the players most likely to shine against Olympiakos. In David de Gea, the team possess one of the finest goalkeepers in European football, and in Wayne Rooney and Michael Carrick, they also boast two of English football’s leading talents. They still have the talent to put teams to the sword.

As seems almost inevitable these days, the tie will bring United up against a familiar face, 36 year-old Roy Carroll, who made 72 appearances in goal for the Old Trafford club between 2001 and 2005, winning the Premier League and FA Cup in the process. He has been at the Greek club since 2011, but mainly serves as backup to Roberto Jimenez and is unlikely to start against his former club.

Tougher tests await United if they successfully negotiate their tie with Olympiakos. David Moyes will certainly expect to progress, but then again, this season results at Old Trafford have rarely gone according to plan.

Written by Editor
2013/14: The season so far
United’s Christmas