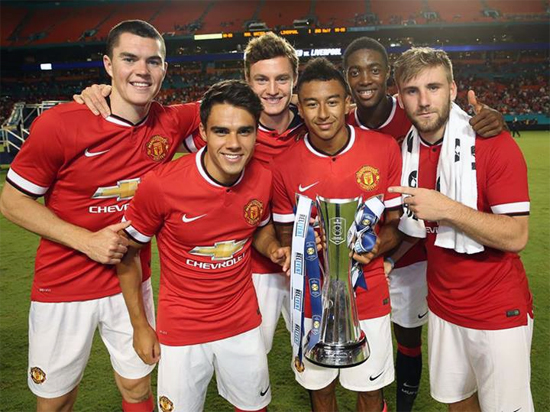 Manchester United vs Liverpool FC. One of the most bitter footballing rivalries the English game has ever seen and on the 5th of August 01:00 BST we were able to watch the two giants of football go up against each other in the ICC final. Before we get into this match report, let me state what the starting XI for Manchester United was (3-5-2) :

This was arguably our strongest XI available that we could put out against Liverpool and one which not many fans would disagree with considering injuries to Danny Welbeck and Michael Carrick. One thing that can be said about this formation is that it allows us to have Rooney, Mata (and in future) RVP all able to play in their preferred positions which increases their effectiveness on the pitch as opposed to them being played out of position (Mata on the left or right under Moyes and Rooney on the left for England). The start of the game saw United stay off Liverpool, no one really busting a gut to ‘get in their faces’ as they would in a league match but that is understandable since it’s only preseason.

Our first clear chance fell to the little poacher Javier ‘Chicharito’ Hernandez after a great cross in from the left hand side from Ashley Young. It took us 5 minutes to carve out this chance but unfortunately, Hernandez jumped the gun in anticipating the ball which left him too far forward to get a clean connection on the ball which was subsequently cleared. Very early in the game, (the 8th minute) Antonio Valencia was subbed off for Luke Shaw with the teenager going to LWB and Ashley Young switching sides to fill in where Valencia was. Not much appeared to be wrong with Tony V but from what LVG said, it doesn’t seem too serious which is good news for us (even if I do not think he should be a regular starter).

Onto the first incident of the game and it was a direct run by Raheem Sterling that caused Phil Jones a problem. The English defender lunged into a challenge on the Liverpool winger sending him to the ground in what was a clear penalty. Steven Gerrard stepped up to the spot and placed the ball into the bottom left corner much to the dismay of our fans. As I watched this game, I felt that this was highlighting our need for an experienced head in our back 3. United had not faced a team who were willing to press high up the pitch constantly like Liverpool were and this forced our defenders into a few errors. One which springs to mind is when Johnny Evans passed to Smalling in the 33rd minute, a completely unnecessary pass as the defender was all of 2 meters away from him. Smalling miscontrolled the pass which allowed Liverpool a chance to attack on the edge of our penalty area. Johnny Evans did have a mare it seemed. A man who many of our fans have expressed pure admiration for was far from the imposing defender we are used to seeing but was instead a man plagued with mistakes and in this first half. It was to no surprise that he was taken off at half time. Other than the penalty and a long range shot from Coutinho which forced de Gea into a save, Liverpool did not pose too much of a threat to United. Saying that, they did dominate in terms of possession of the ball and had the majority of chances though, this is not to say that United were hopeless going forward.

A few things that could be taken from this first half performance are; LVG does not encourage an ‘anywhere will do’ attitude with his team. We seek to play the ball out from the back as much as possible rather than a big hoof up the pitch which potentially means we lose the ball. Even David de Gea would wait and look to pick someone out any time he was on the ball. This is encouraging for our playing style in the future as it means van Gaal is aiming to make our team more pleasing on the eye with the ability to pass the ball, keep possession and be creative. Could we possibly see a nice brand of football played at Old Trafford again since the formidable days of Ronaldo, Rooney and Tevez? Another thing is that our players did look tired in this half. 3 games in 6 days in the conditions we were subjected to would take its toll on players. This could be seen with our players’ sheer lack of concentration at moments in the game, poor first touches and over hit or mishit passes. With this in mind, I was confident that we would improve come the second half and the changes that we made affirmed this.

2 changes were made at half time and they were forced tactical ones. Tyler Blackett came on for Johnny Evans and Tom Cleverley came on for Darren Fletcher. These changes were heavily needed as Evans and Fletcher had been our worst players in the first half, both giving the ball away and not handling the pace of the game well. Though many fans have given up hope on Tom Cleverley, I for one think that he has shown a slight improvement in his game as he seems to be willing to pass forward more often and switch the ball from flank to flank as opposed to the overly safe and cautious play we saw him exhibit last season. In my eyes, this is improvement and means there could possibly be more improvement in the English midfielder’s games given the right coaching. Tyler Blackett on the other hand, has impressed most that have followed us on preseason as his pace, strength and composure on the ball has been lovely to see from someone who has worked hard for their chance at United.

A common move our team has done over this tour is that the wing back will pass the ball down the line and and run for the return, if the return is on then they get the pass back and continue a direct run at the opposition (as seen by Luke Shaw on a number of his powerful runs) but, if the pass back is not on then the ball is passed back to the wide CB and the this allows the team to free themselves to start a new move. More evidence of our new found intelligence in play instilled by a manager who has a real philosophy and players who have bought into said philosophy too.

Our first goal came in the 55th minute by Wayne Rooney from a brilliant cross from the right hand side from Hernandez but the main focus for me was Herrera’s input in the move. Herrera came under pressure while on the ball and instead of playing the ball backwards, he charged forward and lost his man to then pass to Hernandez. Hernandez then sent in a cross which Rooney expertly guided across goal with his left foot to make it 1-1. We had our tails up and started to press Liverpool more. We got a throw in on the right hand side and worked a nice 14 pass move which saw the ball go back to the back 3 twice before Shaw sent a low ball to Mata on the edge of the Liverpool area and took a shot which was deflected by Sakho past Mignolet. 2 goals in 2 minutes and 2 seconds and we were on top of the game. Liverpool looked rattled and United were in the ascendancy but not too much happened from then (except the goal that was disallowed as the ball had gone out of play- scored by Rooney). In the 69th minute, Mata came off for Kagawa and Hernandez came off for the incredibly frustrating Nani. Nani was to partner Rooney upfront and Kagawa got a run out in his favoured no.10 position. Few bits of good play came from United from then but the moment that stood out for me was a sour one produced by aforementioned frustrating Nani. After a misplaced backpass by Rooney, Liverpool got a corner that United dealt with it confidently. The ball fell to Nani and at 2-1 up, he attempted to take on his man in our own penalty area which he failed to do and crashed to the floor pathetically claiming a free kick. If it was not for Smalling making a last ditch challenge to clear the ball, Nani would have been the culprit of giving Liverpool a leg back in the game. When will Nani learn how to make positive decisions in the game? Jesse Lingard came on for Herrera who played well and further increased the fans appreciation for him. The 89th minute came and we were closing the game out, a ball came in from the right hand side to Kagawa, who miscontrolled it, fell to Lingard. With one touch to control the ball and the second touch to expertly put it in the bottom corner, it was 3-1 and we had come from behind to win the game.

Though LVG was not entirely impressed with the performance (this is a good thing as it means he always strives for improvement) our fans have many things to smile about. Not least of being the improvement of Ashley Young who looks a new man in this system. A man who has come under abuse (a lot of the time being needless abuse) but now, he has been one of our best players on tour. His crossing has improved vastly and has caused problems for many of our opponents in preseason which acts as a reminder of the player we expected to come in when bought from Aston Villa. Another good point is the form of Wayne Rooney: he looks sharp, fit and ready to work for the team which is not what we are used to with Wayne during preseason as we have seen many a time, him come back unfit and sluggish after a period out of the game. Could he be our club captain? Only LVG knows, but the signs are encouraging and his performances have done him no harm. One more positive point is the play we are seeing from our team. With David Moyes, we relied on crosses and high balls into the box (glad that time has passed) but now, under LVG, we seem more confident on the ball, willing to be creative and keep possession with an attractive approach to the game.

I do not want to fixate on the negatives of this game but only two come to mind; the performances of Fletcher and Evans were poor and that was for everyone to see. They lacked concentration when playing and seemed to misplace a number of passes- Fletcher misplacing a few simple ones. Though, this can be put to fatigue as Fletcher has been a good player over this tour as we have seen and maybe just had an off game. Encouraging signs for United over this preseason and in my next piece, I will look over and analyse the entire preseason for each player on tour.

Thank you all for reading this, it is good to be back writing again before I go off to university and it has been even better to watch United and get wrapped up in the majesty of the game again. I look forward to writing my next piece and cannot wait for the season to start.

Written by Editor
A big week for Woodward to prove himself!
A Recap of Evra’s Manchester United Journey