A big week for Woodward to prove himself! 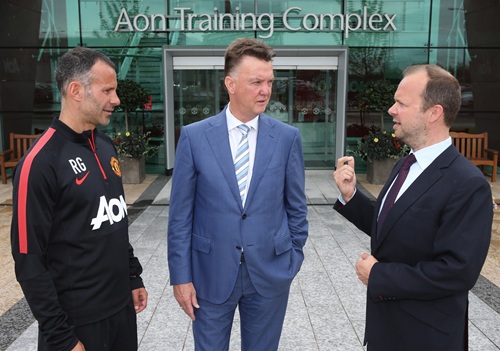 With the season fast approaching and less than 3 weeks left in this summer transfer window, this week could show all we need to know about Ed Woodward. Last month, Woodward gave an exclusive interview to MUTV which he said ‘Louis has an unlimited budget here at Manchester United’ and that ‘the club would be willing to break to world record fee for a player’ if Louis Van Gaal wants to.

These are big statements from United’s CEO, especially after he said similar remarks this time last season, before ending up paying £27M for Marounne Fellaini with only hours left in the transfer window. One thing all United fans are hoping is that the ‘transfer saga’ doesn’t raise it’s head again, this time with Hummels & Vidal. Supposedly, United are interested in both of these world-class players, but weeks and now months have flown by and still nothing has happened. We know both Borussia Dortmund & Juventus would demand large fees for their top players, though, this shouldn’t be a problem according to United’s CEO. Even if we do end up signing a world-class midfielder/ defender this Summer (which I don’t think we will) we will end up having to pay over the odds for these players after Woodward’s latest remarks.

I struggle to see Woodward having a future at the club if this summer ends up being like last summer. United are a massive club and we don’t need to chase players which don’t want to join the Red Devils. Though without Champions League football this season, it may be more difficult than first thought. I’m sure all United fans would love to see Ed Woodward pull it out of the bag this Summer and make a statement, the additions of Luke Shaw & Ander Herrera are great for the club. But unfortunately, the club was left in a mess after the failure of David Moyes last season and the squad requires major rebuilding this Summer.

We all know LvG’s favoured formation is 352, and with only Jones, Smalling & Evans having much first-team experience, the addition of at least one central defender is a must this summer. After chasing Thomas Vermalean for the past month, time has been wasted with a player which has now joined Barcelona for £15M. It is slightly worrying that we couldn’t even sign an Arsenal back-up, never mind a first-team starter. Dortmund & Juventus aren’t exactly clubs which could turn down massive money bids for their star players, even though this may cost United up to £100M to get both Hummels & Vidal, I think it’s definitely worth it.

This may sound like I’m being negative, but I see it as just being realistic after last summer transfer window & last season’s disaster under Moyes. I wish Woodward all the luck he needs and hopefully he has something up his sleeve to surprise us all. I think I’m going to sit on the fence about who we will sign, I really wouldn’t be surprised if this Summer is a disaster or a success.