While last season was a season to forget for Manchester United fans, no one will be forgetting Adnan Januzaj’s emergence into the first team.  United fought hard to seal the Belgian’s long-term future at Old Trafford as the top European clubs were looking to prize him away. His rise has been splendid to watch and United fans can’t get enough of watching him. So the big question is, can he fit into van Gaal’s system?

When we talk formations, it’s important to remember one key point. Formations are only a snapshot of what we see on the pitch.  The game is dynamic and in different phases of the game (defending and attacking), the formation most likely will change.

In Louis van Gaal’s system, good ball circulation, team balance, pressing in midfield zones and out wide are some of the major components he uses.  For United, van Gaal’s interpretation of a 3-4-1-2 in attack is geared towards maximizing our attacking options but also maintaining balance when the team loses possession.  The outer centerbacks (in this example pictured below, Evans and Smalling), spread wide to open passing angles between De Gea, the wingbacks and the central midfielders.

Throughout the tour, it was interesting to see Herrera and Mata interchange in the build-up phase. Mata would check back and help circulate possession occupying the space  Herrera/Fletcher vacated. The idea being here, the redirect of possession as players move opens more ways to maintain the passing triangles throughout the team to counter what the opposition is doing to stifle passing options.  Hence, a quicker passing tempo helps in keeping the opposition on their toes. Too slow and the opposition probably won’t be too worried about the movement in front of them.

To read more about van Gaal’s system for United,

Where does Adnan fit?:

In this setup, I expect Adnan to be used in the 10 position or as a striker. Both positions allow for movement into the wide areas as we saw with the Netherlands and Arjen Robben.  Robben played as one of the 2 strikers in van Gaal’s 3-5-2 (in attack) but however,  he drifted into the wide areas numerous times, picking up the ball and dribbling straight at the opposition.  Adnan has shown similar capabilities in his dribbling exhibiting great movement along with an eye for key passes.

In the figure below, I expect he could play where Welbeck is as van Gaal likes to have the build-up play move from wide areas towards the middle, playing quick passing interchanges in an attempt to open up the opposition.  Since Adnan is left-footed, he would tend to drift inside, but the talented Belgian has also shown in the previous season, he is not afraid to use this to his advantage as it will look like he’s going to cut inside to his left but instead goes right.  His quick movements on the ball and use of his body allow him to create some extra separation from his opponent. 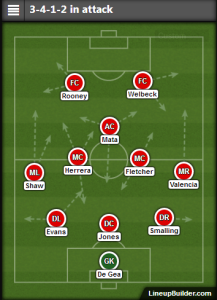 For similar reasons, he could also play in the 10 role as he likes to get involved in play even when in deeper positions.  Although, he may not appear as often in wide areas, his ability to play in tight spaces can be useful when the opposition choose to sit deeper.  He is quick in his thinking, seeing the opportunity and quickly executing the pass.  A good example is in the GIF (shown below) from the preseason Valencia match.  A key trait to have in breaking down stubborn defenses because the opportunity is only available for so long.

The picture below illustrates how the team in the above formation could look in a 4-3-3 setup. In terms of where Januzaj would fit, he could play anywhere across the attacking third (LWF, CAM, RWF, ST). Although the formation is different, the system is still the same. What I mean is the focus is still on good team balance, accurate ball circulation, working combination play towards the middle but it also provides a different way to exploit the opposition (depending on how the opposition is defending).  It is arguable if the 4-3-3 formation maximizes our attacking options as van Gaal has hinted he would like more quality in the wider positions to use 4-3-3 more. Some would argue the image below looks more like a 4-2-3-1 attacking formation which is a fair point to make.  Whether it is or it is not, is more of a semantics argument. 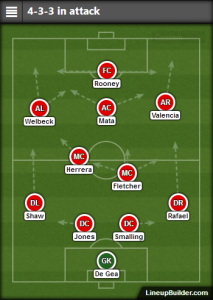 In terms of where Januzaj will regularly play, it remains to be seen where van Gaal sees his regular or best position. The positive news is what van Gaal asks his attackers to do is not out of sync with Adnan’s application to the game. van Gaal has been known to switch around players during the game if he feels it’s needed.  It’s one of the reasons he is a highly rated manager.

The ability to make in-game adjustments which improve the chances of your team winning is not an easy skill to master.  Yet when you look through van Gaal’s career and namely his in-game adjustments in the World Cup, you can see this is a man who puts much thought into the decisions he takes.  As one Bayern fan told me, before he rises from the bench to communicate a tactical adjustment he first talks with  his staff and when the players see him rise from the bench, they know something important is coming.

So if we see Januzaj getting played in different positions or not played regularly, I don’t think it is cause to worry.  He is still developing and at such a young age, it’s important to make sure he is handled well to reduce the amount of injuries he experiences in his career.  What is important is if his performances suggest he might not be well-suited to van Gaal’s system.  However, as I have explained, I think he will excel in van Gaal’s system. Make of that what you will!

What do you think? Do you think Januzaj fits into Louis van Gaal’s system? Tell us below!

Written by Editor
A New Start?
A big week for Woodward to prove himself!