Man United vs Liverpool blasts from the past.

With the match between Manchester United and Liverpool on the horizon, I thought it would be a good chance to go down memory lane, and take look back at a few of my favourite clashes between the giants of English football, and Liverpool.

The Doc’s red army, as the team was dubbed, had lost to Southampton in the previous season’s final, after which United manager Tommy Docherty had vowed to return the following year, and the team managed to keep to his promise.

Liverpool, managed by Bob Paisley, were on course to win the treble of League, European Cup and FA Cup,a feat that had never been achieved.

The sides were level 0-0 at half time, but in a five minute spell in the second half there were three goals. The first from United’s Stuart “Pancho” Pearson, who opened the scoring with a fine strike past Ray Clemence in the Liverpool goal, but that was quickly cancelled out by Liverpool’s Jimmy Case, with an effort that United keeper Alex Stepney just could not reach.

Then with the match locked at 1-1, up popped Scot Lou Macari with an effort that hit the chest of Jimmy Greenhoff, the ball span over the keeper and defender Phil Neal to win the cup, and stop Liverpool doing the treble. Of course the first team to complete such a feat was Man United in 1999.

Not the greatest final in the history of the competition, but memorable for three reasons.

Firstly, the famous cream Armani suits worn by the Liverpool players prior to kick off. You could see by their faces that they themselves were embarrassed by their choice in match day clothing, and from the United players reaction they new they had won the match even before it had started. From that day the Liverpool players were dubbed the ‘Spice Boys’ among other things.

Secondly, the strike from Eric Cantona in the closing stages of the match. United had a corner which when delivered was weakly punched out by the Liverpool keeper David James, it then fell on the edge of the box to the one person you would want it to fall to, Cantona. With little back lift and a crowded penalty area the Frenchman somehow managed to fire the ball into the net. Great skill from a great player.

Lastly, is the fact that United became the first club in history to win the Double twice on that day in May, and against the scousers no least. By this time Fergie had really knocked them off their perch. 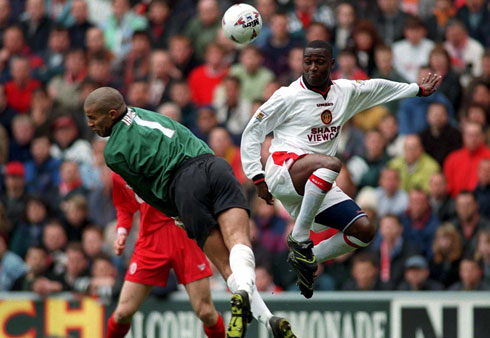 Before this match reporters were asking fans outside Anfield who they thought would win the match for United, one astute United fan answered ‘David James’. The fact that James was the Liverpool keeper made his answer all the more hysterical. But how right the fan would turn out to be.

During the match James was flapping around his penalty area like a performing dolphin at SeaWorld, actually thinking about it a dolphin has more skill at leaping.

His mistakes handed the match to United, and the look on United forward Andy Cole’s face was priceless as James again missed a cross, which Cole headed in at the far post. The match was also famous for the fact that defender Gary Pallister managed to score two goals.

James became the subject of much ridicule, and he didn’t help himself when he blamed his ever growing list of errors on playing too many video games, which had had an effect on his fingers and thumbs, priceless.

As I mentioned these matches are only a small selection of my choices, you will no doubt have your own, but any match where we beat Liverpool is, as Cantona would say, Magnifique!