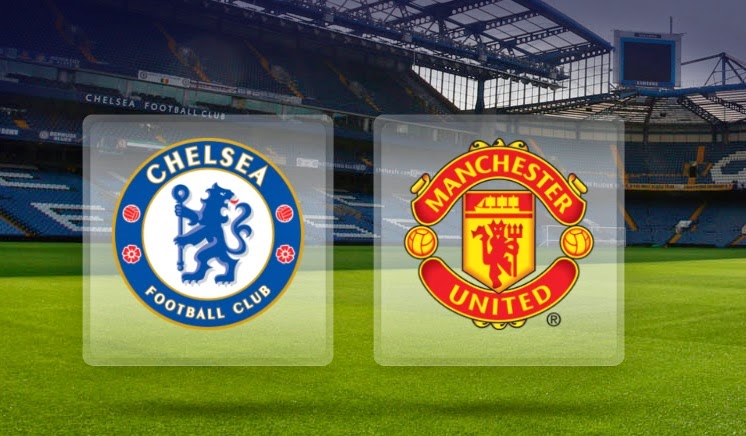 Chelsea grab the points after being outplayed by a dominant Manchester United.

After the euphoria of beating City in the Manchester derby here was a true test of how far United have come under the guidance and philosophies of Louis van Gaal.

On the back of six straight wins in the Premier League, United travelled to the capital full of confidence.

Chelsea, who will only have themselves to blame if they are not crowned champions, welcomed the Red Devils to Stamford Bridge for a re-match against the Dutch master and his Portuguese protege.

The first meeting between LvG and Mourinho ended in a stalemate after a late, late equaliser for United by Robin van Persie back in October.

There was bad news for United in the build up to the match with four players ruled out with differing injuries. Michael Carrick, Marcos Rojo, Phil Jones and Daley Blind were all left back in Manchester.

Wayne Rooney was used in midfield in the absence of Carrick. That gave Falcao the chance to impress in the starting line-up after being on the bench in recent matches. With only a handful of games left to convince the manager and the fans that he has a future at Old Trafford.

Robin van Persie was handed a place on the bench after recovering from his ankle injury alongside Angel Di Maria.

In the bright London sunshine, United started the match.

Three minutes in and the first chance of the game fell to Wayne Rooney. Luke Shaw broke down the right and pulled a great ball back for the captain who let fly with a shot that most of the crowd, and De Gea, thought had gone in but was just wide.

Great start by United just what was needed.

Three minutes later and defender Shaw had a blast from the edge of the box which was blocked on its way to the goal.

It wasn’t until the seventh minute that Chelsea had half a chance which De Gea managed to save for a corner.

In the first ten minutes, it was United who had started the better of the two sides especially down the left with Shaw and Young.

The away fans were in fine voice as always as they tried to spur their team on.

After 11 minutes and it was all United as Herrera tried his luck from distance but pulled his drive wide. 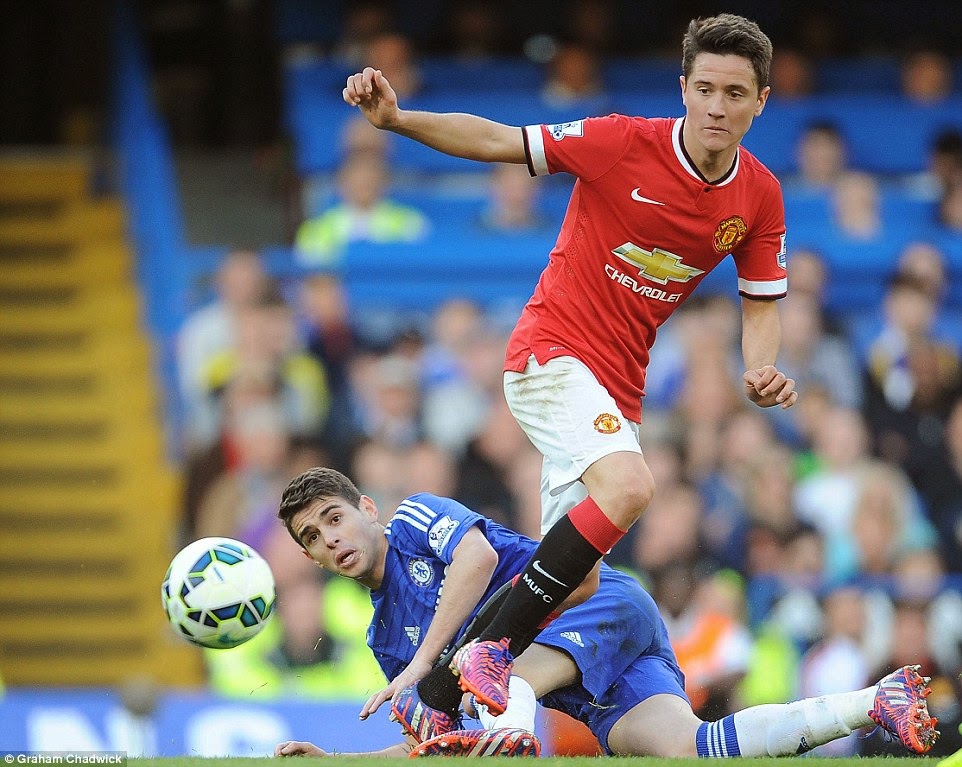 On the quarter hour mark, Shaw won a corner after excellent work down the left flank. A bright start from Shaw in his first match for a while.

You got the feeling that United had to capitalise on their possession and grab a goal before Chelsea got their game together. United were by far the dominant team but they just needed that final ball to be of better quality.

Ander Herrera was having a great match in the middle of the park and the majority of United’s creative play came through him.

Chelsea definitely looked out of sorts as United pressed up onto their defence. However, the home side seemed content to let United come at them.

In the 25th minute, Mata broke on down the right and produced a cross which was crying out for a red shirt to get on the end of it but the danger was cleared.

Two minutes later saw Chelsea’s first real chance on goal for Oscar but his effort was blocked by Fellaini.

Just before the half hour Falcoa gave away a needless free-kick in a dangerous area which Drogba shot straight into the wall.

Ander Herrera continued to dictate the United attacks from deep, providing Wayne Rooney and Marouane Fellaini the freedom to find pockets of space.

Drogba went through the back of Herrera but received no caution.

After 34 minutes as the ball travelled towards United’s penalty area De Gea rushed out and looked to have handled the ball before clearing, but luckily the referee and his assistants didn’t notice.

Then in the 37th minute a major blow to all United’s domination as Chelsea scored through Eden Hazard. He received a neat back-heeled pass in the area from Oscar and gave De Gea no chance one on one. A goal of similarity to Mata’s effort against City last week.

United let it slip having enjoyed the majority of possession.

Straight after the goal Herrera went down the other end of the pitch and won a corner.

In the 40th minute, Falcoa was unhappy after a tussle with John Terry. On further inspection, the Colombian was right to be annoyed as Terry quite clearly clobbered him with a forearm smash to the back of the head, but as it was Terry the referee saw nothing untoward.

Eden Hazard was proving to be Chelsea’s danger man as he got more involved in the game following his strike, but to United’s credit they kept plugging away at Chelsea.

As the first half ended it was all United with great approach play but with no penetration and they were unlucky to be behind from Chelsea’s only real chance of the match but showed that they have the quality in the team to turn it around in the second half.

Manchester United began the second half as they had finished the first with controlled possession.
Unfortunately, Radamel Falcao was not having a productive day up front and once again seemed to be struggling to impose himself on the game.

51 minutes into the match and Chris Smalling did well to break up a Chelsea attack after Rooney had lost possession far too easily. Rooney was most definitely needed up front.

Two minutes later Drogba was up to his old tricks again as he fouled McNair to earn himself a yellow card then as his team countered he failed to put away a chance to make it 2-0.

United were so on top of the game it was like they were the home team and Chelsea had parked the bus in front of their goal and waited for the counter attacks. It was frustrating to watch and must have been even more frustrating for the players.

In the 56th minute, Ivanovic was cautioned for a foul on Shaw on the edge of the area. Mata delivered the resulting free-kick but it sadly came to nothing.

On the hour came a speculative shot from McNair which was well saved by Courtois and then Mata came close to converting a Shaw cross.

It was still all United but with no goal to show for all their efforts. As Falcao was producing another dull performance surely it was only a matter of time before Louis van Gaal made the changes needed to turn the match around.

After 62 minutes, Oscar was booked for a foul on the ever impressive Herrera.

Shortly afterwards yet another United attack as Shaw crossed, Fellaini laid the ball off to Rooney whose shot was blocked for a corner.

With less than 25 minutes to play Falcao had his first effort on goal but was wide of the mark.

Rooney did his best in midfield but was sorely missed at the spearhead of the attack.

Louis van Gaal decided on a double substitution in the 69th minute as Mata and Young were replaced by Di Maria and Januzaj. I would have preferred to see Robin van Persie introduced instead of Januzaj as the Dutchman would have been more of a threat than the young Belgian.

70 minutes on the clock and there was Falcao in the box producing a snapshot that was blocked at close range by Cahill.

Since the changes that were made by United Chelsea enjoyed more of the ball.

Falcao’s best chance came in the 76th minute as he was put through by the lively Shaw but hit the outside of the post with a thunderous left- footed shot.

Shaw, who had impressed on his return to the team today, was replaced for the final ten minutes by Tyler Blackett. I think Shaw had literally run himself into the ground against his boyhood club.

Into the last ten minutes and it was still all United as they desperately searched for that all-important equaliser.

In the 82nd minute, a Di Maria corner was narrowly headed over by Rooney.

You got the feeling that with Chelsea’s defensive tactics and United’s inability to convert their chances that it was not going to be the Red’s day.

Into the 4th minute of injury time and controversy as Herrera was booked for a dive in the area when he was obviously clipped by Cahill for a certain penalty.

However, the referee had decided that the Spaniard had deliberately tried to deceive him for a spot kick. Both players came head to head in a heated end to the match.

In a game that was totally dominated by United, it is still unbelievable how they managed to lose the match against a Chelsea team whose only real chance on target was the goal. But if you don’t score you end up with nothing, which is exactly what happened.

All credit to the Red Devils for going there and trying to win the match. If not for a lack of finishing in the final third it would have been a totally different result.

Man United deserved more from the game but only have themselves to blame for not capitalising on the possession they had in abundance. Falcao once again flattered to deceive in another tepid display that will not endure him to van Gaal’s future plans.

Sure, United weren’t helped by some key injuries, especially to Carrick, but they showed their newly found collective spirit and can take heart from their display and hold their heads up high.

Next up is a tricky away trip to Goodison Park to face Everton. I fully expect the duo of Rooney and Fellaini to be fully pumped up to face their old team and for United to come away with the three valuable points needed in their quest for runners-up spot.