Away day blues for United. 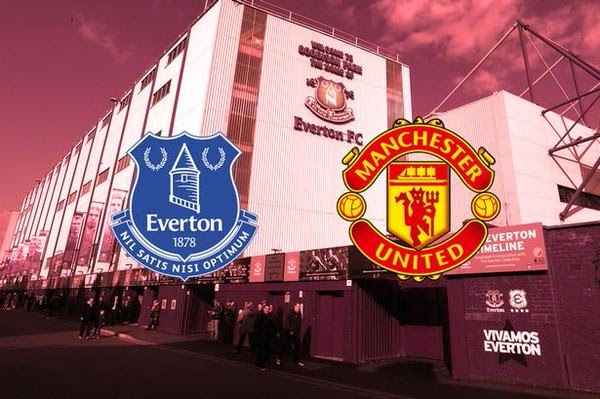 Here was a chance for United to bounce back after the disappointing result against Chelsea and solidify their Champions League qualifying spot.

United started the day in fourth place after Man City had narrowly beaten Aston Villa the day before.

However, a win would have taken United up into to second place as Arsenal were not to play until later in the day.

With five matches left to play United shot themselves in the foot with some terrible defensive mistakes against an Everton side who had clearly watched videos of the Chelsea loss and taught United a clinical lesson in counter attacking.

Before the match, there was good news on the team injury front when it was announced that Daley Blind had recovered from his injury to give Louis van Gaal a fresh option in midfield.

So, there was only one change with Blind fit to play in midfield which allowed Rooney to take up his favoured position in attack against his boyhood team. This change relegated under-performing Falcao to the bench alongside Robin van Persie and Angel Di Maria.

‘Wayne Rooney is better in a striker’s position for the team,’ Van Gaal told Sky Sports before the game. ‘Herrera is better one line up and Blind is the holding midfielder.’ These words would normally turn out to be true but today they would come back to haunt the manager.

Another player returning to his old stomping ground for the first time was Marouane Fellaini.

Everton started the match in the bright sunshine which would quickly turn to grey for the Red Devils.

It started well enough for United who went on the attack looking for that early goal, but as early as the fourth minute United succumbed to a sucker punch of a goal from Everton.

Valencia won United’s first corner which was cleared rather fortuitously by the home side who then broke forward on a counter attack at pace. Finally it was McCarthy who slipped between the last two defenders Daley Blind and Paddy McNair unchallenged and placed the ball past David de Gea. Atrocious defending!

As they had done recently against Man City United had fallen behind early but there was enough time in the game to do something about it.

6th minute Fellaini was quick to capitalise on a defensive error only to blast his shot just over the bar from outside the area. I don’t think he realised exactly how much time he had.

Both sets of fans enjoyed a lively start to the match.

Fellaini was in the thick of it in the opening few minutes as he gave away two free-kicks the latter received a yellow card. He would have to tread carefully for the rest of the match against his old team.

In the opening quarter of an hour, United had pressed forward well and won three corners but were unable to make good use of them.

The away fans were in great voice as usual easily out-singing the home fans.

On the quarter hour mark there was good build up play down the left by the reds and eventually the ball was laid off to Blind who was lurking on the edge of the area but his shot was tame and was easily blocked by the Everton defence.

18 minutes in and there was panic in the home defence which almost gifted a goal to Fellaini.

A minute later United were awarded a free-kick to on the right of Everton’s penalty area which was whipped in at pace by Mata. Smalling managed to get his head on the ball and produced a powerful header but former Red Devil keeper Tim Howard collected comfortably.

It was a tremendous opening to the game helped much in part to two defences who look far from comfortable. Great viewing for the neutral crowd but frustrating for United fans.

Another United attack in the 21st minute this time it was Ander Herrera who had a mazy run in the box but just couldn’t get a clear shot on goal.

It really was United who were enjoying the majority of the possession but needed more of a cutting edge up front.

24th minute and Mata cleverly switched the play to the left where Young was waiting to send over a cross which was met by Rooney. His resulting header was blocked for a corner.

Everton forward Lukaku tried his luck from distance but the Premier League keeper of the year, David de Gea, read it well.

Two minutes later and it was Young who had a chance after the ball had been chested down to him by Rooney. However, his placed lob was just off the mark.

After half an hour, it was all United as they went in search of a deserved equaliser. They were attacking Everton on all fronts, down the left and right wings even through the middle but to no avail.

Then in the 32nd-minute disaster struck. Everton broke and luckily for United Smalling was alert enough to block out a lethal looking cross. This was followed by three successive corners for the blues. The last of which was superbly headed in by Stones to make it 2-0 to Everton.

The marking by United was quite honestly atrocious even with Young on the goal-line they couldn’t stop the header going in.

A goal totally against the run of play. United had lost their concentration at a crucial time and that cost them dearly. They would have their work cut out to come back from this. But we all know with United anything is possible.

The last ten minutes saw no further chances as United looked shell shocked to be trailing by two goals.

The biggest problem for the visitors was defending the counter attacks by Everton. At times, the positioning of the defenders and midfielders was terribly inadequate and the Toffees capitalised on that weakness.

In midfield, Blind was having an off day and even though Mata and Herrera were positive going forward they were left stranded each time Everton countered.

United missed Carrick in the heart of the midfield as they had enjoyed 61% of the possession with nothing to show for it. Which goes to show that possession is one of the most meaningless stats in football it’s goals that matter and United needed them in the second half.

United had it all to do in the second half and Louis van Gaal showed his intent by replacing Fellaini with Falcao at the start of the half. Yet another chance for the Colombian to prove his worth to the team.

The Reds immediately went on the attack and won a corner. Swung in by Young eventually the ball fell to Rooney at the far post he turned and shot, but Howard threw his body in the way to make a save.

After two minutes, Everton went on the counter attack yet again and Shaw had to race into the middle to cover and put in a challenge on Barkley. Both players felt the full force of the tackle as Shaw was clouted on the head but thankfully there was no injury to either player.

In the 50th minute, Mata had a great chance to play a through ball to the forwards but over-hit his pass, which summed the afternoon, industrious enough but poor final balls.

Ashley Young found Shaw on the overlap down the left and the young defender got to the by-line and managed to cross the ball which was sadly behind the waiting strikers. Good combination work from the two England players.

Somehow Lukaku was allowed to collect the ball from a throw-in and whipped the ball across United’s goalmouth. Thankfully no blue shirt was close enough to connect. That was a big let off for United but once again showed a lack of concentration at a set piece.

One hour had elapsed and there was still no sign as to how United would claw themselves back into the match. A lot of huffing and puffing but unable to break down the Everton door.

Everton had obviously taken a leaf out of Chelsea’s tactics from last week or borrowed their bus.
Another change for United came in the 63rd minute as Mata was replaced by Di Maria. Could the Argentine provide the inspiration the team needed?

Shortly after Shaw was booked for pulling the shirt of an opposing player who was about to counter again. One minute later Smalling was there to save the blushes again as he blocked a near post cross out for a corner.

Angel Di Maria did try a speculative shot from distance in the 69th minute, but that’s all it was, speculative.

Falcao at last had a chance on goal when he got on the end of an up and under from the back, but his looping header was easily collected by Howard under his crossbar.

Twenty minutes left on the clock and United had to do something soon or this result could seriously jeopardise their automatic Champions League qualifying spot.

Then in the 73rd minute 3-0 Everton. United defenders stopped for an off-side against Lukaku that didn’t materialise and didn’t check the run of Mirallas who raced through and shot passed a helpless De Gea.

Awful defending as all the defenders hesitated waiting for a flag which wasn’t raised as Lukaku hadn’t touched the ball. What ever happened to playing to the whistle?

Game over as United were only playing for pride in the hope of getting something from the game.

80th minute and another half chance fell to Herrera whose shot at least earned a corner.

Falcoa did manage to put the ball in the net after rounding the keeper only to see the flag had been raised for offside.

There was still time for David de Gea to pull off one of his usual world class saves as he tipped over an effort from Mirallas with his finger-tips.

It was a very similar save to the one he pulled off in this fixture at Old Trafford earlier in the season.

In the last ten minutes, Rooney seemed to have a knock which he couldn’t run off so he was replaced by Robin van Persie in the 88th minute.

As the game came to an agonising close all credit to the United fans who had not stopped singing and chanting throughout the 90 minutes. We really are blessed with the best fans in the world especially away from home.

Unfortunately, some United players didn’t turn up for the challenge. Mata, Herrera, Rooney, Blind and Fellaini all struggled to stamp their normal authority on the game. After some solid performances of late it was surprising to see so many players off their game at the same time. The same could be said of Falcao and Di Maria after their introduction.

The only players who could walk away with their heads held high were Shaw and Young both of whom never stopped running down the left trying to create chances.

This was the first and hopefully the last time that United had lost two matches in a row under Louis van Gaal’s reign as manager. 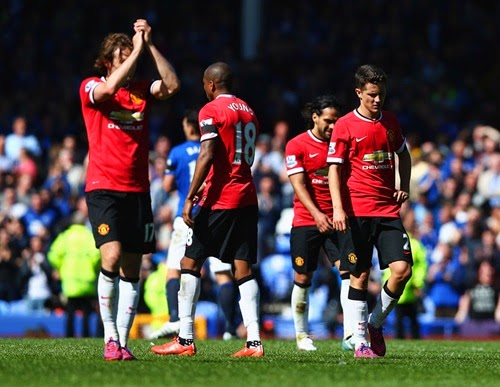 There are only four games left to get one of the coveted places starting with the visit of West Bromwich Albion to Old Trafford next weekend.

Although there is a little breathing space behind United in the table it is imperative we beat WBA and not give Liverpool a sniff of a top four place.

Written by Editor
United blow it against The Baggies.
A bridge too far for United.