United blow it against The Baggies. 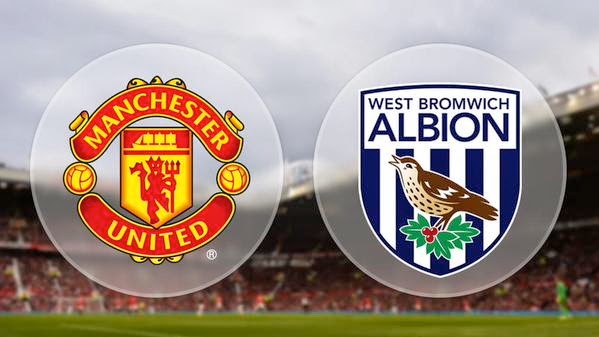 United find it an uphill struggle against WBA as Myhill shuts out the Red Devils.

Following two successive defeats in a row in the league for the first time this season it was imperative that United got back on track at home to WBA.

United went into the match having won the most home games of any team in the league, fourteen, and with only four games to play only needed six points to guarantee a Champions League place.

There were doubts about the fitness of captain Wayne Rooney in the week leading up to the game after he had received a knock to his knee against Everton but that fear evaporated when he was seen training on Friday. Rooney has scored 15 goals in his last 16 games at Old Trafford.

There was further good news as Robin van Persie had an excellent run out for the reserves on Monday night scoring a double in a 4-1 victory over Fulham.

Daley Blind kept his place in the side at the expense of Luke Shaw at left back.

Once again, Falcao and Di Maria would start the match from the bench as the manager showed faith in the players that had shown their worth to him. There was also a place on the bench for Andreas Pereira who was celebrating his new contract at United.

For WBA, there was the welcome return to Old Trafford of former United favourite Darren Fletcher after he had been released in January.

Albion kicked off the match attacking the Stretford End.

With Carrick still absent Rooney kept his place in midfield with van Persie up front as the lone striker.

It was fitting that Fletcher had the first strike after two minutes it was also fitting it was high and wide.

Shouts of Rio, Rio rang out around the stadium prior to the 5th minute when the fans showed their support for former red Rio Ferdinand, who sadly lost his wife Rebecca to cancer the previous day, by having a minutes applause.

8 minutes on the clock and Chris Smalling tried to pick out the run of van Persie with a ball over the top, but the Dutchman couldn’t keep it in play.

United passed the ball around confidently in the first ten minutes looking for a way past the Albion defence which closed ranks well in the final third.

In the 12th minute, Young cut in from the left and fired in a shot which was deflected off a defender then rebounded off van Persie who in fairness didn’t know too much about it. 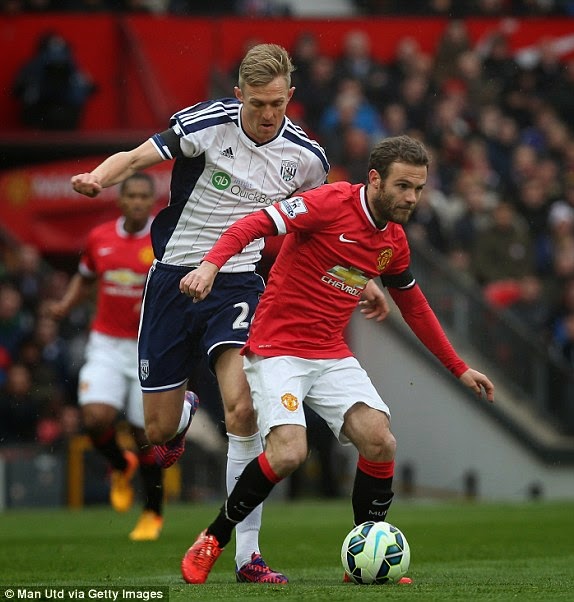 Two minutes later and the first corner of the match fell to WBA which was headed goalward by Lescott, but de Gea was on the line to collect comfortably.

After a quarter of an hour van Persie span in the area and unleashed a shot which the keeper parried only as far as Young whose snapshot was deflected for a corner.

From the resulting corner keeper, Myhill saved from van Persie again. This would become a common theme in the match.

18th minute young was involved yet again as his cross from the left was met by van Persie whose first-time effort was just wide.

In the first 20 minutes, all the attacks centered around the Dutch striker as United searched for the opener.

Rooney and van Persie almost produced an opening on the edge of the box in the 25th minute, but the final shot was blocked.

A minute later Mata nearly squeezed through a gap at the near post.

The Baggies earned another corner just before the half hour that Lescott managed to get his head to. Thankfully his effort was over the bar.

It was great to see Robin van Persie back in action as his tireless running gave the midfielders options when in attack something that had been lacking in the last few matches.

On the half hour mark, United attacked with five players but as the ball fell to Fellaini the Albion defence had re-grouped and United had to settle for a corner.

Some signs of desperation and frustration from the home side crept into their game as United were doing everything right and it only needed a moment of skill to get the opener and capitalise on their possession.

Albion didn’t offer anything in attack and only looked slightly dangerous at set pieces.
This was a game for the taking for the Red Devils.

The game had gone flat until the 41st minute when Young was involved by trying his luck from the edge of the box. As his effort headed towards the goal it only needed van Persie to get a good contact on it but he slipped at the vital moment and the chance was gone.

Just before half time Valencia unleashed a rocket from a tight angle which the keeper managed to clear only to Herrera who was waiting on the edge of the penalty area but his volley sailed over.

United finished the half with a corner which, unfortunately, amounted to nothing.

A very lacklustre first 45 minutes with the home side showing good intentions but failing to deliver the knockout punch needed. With 10 attempts on goal, most of which fell to Young and van Persie, you would have normally expected at least one goal but it wasn’t to be.

United got the second half underway hoping to open the scoring quickly and release the tension around the stadium.

However, it was Albion who started the brightest by winning a quick corner which de Gea jumped the highest to collect.

United soon got into their stride and Rooney had a powerful shot saved by Myhill in the 47th minute.
52 minutes in and Blind had a snapshot inside the area which hit Fellaini who, as a result, was ruled offside.

Robin van Persie dropped a little deeper allowing Rooney to try his luck up front with Fellaini in an attempt to try and find a different way through the Baggies resolute defence.

As with Chelsea and Everton, it looked as if WBA had worked out how to keep United at bay and that was to have 11 defenders behind the ball and wait for a chance on the counter.

In the 57th minute the crowd got excited following good work from Daley Blind down the left when he produced an excellent low cross that caused confusion in the six yard area as Fellaini tried to get the ball untangled from his feet which he failed to do.

This period of action seemed to rouse the home crowd who found their voices as they tried to spur their side forward.

Then in the 61st minute Paddy McNair showed his inexperience as he was involved in a collision with Darren Fletcher right on the edge of the box. McNair was cautioned for the foul.

From the resulting free-kick Albion’s Chris Brunt let fly with a thunderbolt which deflected off an Albion player who was stood in the wall and gave David de Gea absolutely no chance as he was rooted to his line.

United were undone from a badly deflected set piece and had their work cut out to get back into the match.

67th minute and United had a good call for a penalty as a Mata cross hit the hand of Lescott. Referee Taylor saw it differently and waved play on.

One minute later Mata came close after a through ball from van Persie, but his toe-poke went wide.
In the 71st minute, Di Maria came to life as he played a ball across the area which was cleared for a corner.

From the corner, a Valencia cross appeared to be handled in he area by Berahino. The referee immediately signaled for a penalty, even though, the offence did look to have been just outside the area.

Maybe referee Taylor was atoning for his mistake on the penalty shout a few minutes earlier.

Up stepped Robin van Persie to take the responsibility but the usually assured striker had his effort well saved by Myhill. A fantastic opportunity to equalise had come and gone.

From the penalty clearance, United won a free-kick which van Persie floated into the area and the pinged around the box like a pinball machine before going out for a corner.

From the resulting corner, McNair had an easy chance to redeem himself for his foul which led to Albion’s goal but he headed wide when he really should have done a lot better.

Entering the final ten minutes and United created chance after chance but were caught offside on too many occasions.

Radamel Falcao was given an opportunity to save the game in the 83rd minute as he replaced McNair.

With an attacker replacing a defender Louis van Gaal showed his intentions but it also left United fragile on the counter attack by Albion. A delicate balance.

As the clock ticked by Di Maria had a great chance to pick out a forward with a cross from the left which only managed to find the keeper.

Three minutes left and yet another poor delivery from Di Maria which had some sections of the crowd booing in disgust. This didn’t deter the Argentine as he again tried to pick out Fellaini to no avail. 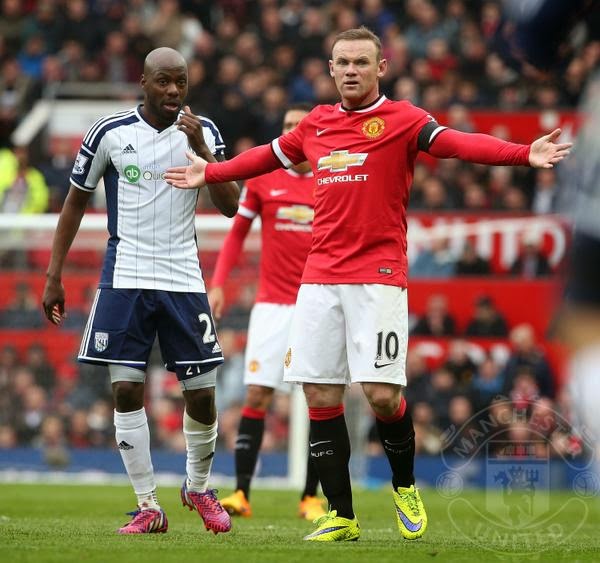 Last minute of normal time and van Persie let fly from the edge of the box with a left footer that was destined for the bottom corner until Myhill produced an even better save than the one he produced from the penalty.

Injury time and it was that man Myhill again as he tipped over a long range effort this time to deny Di Maria.

Myhill produced heroics in the Albion goal with a string of brilliant saves to keep United out at the death.

Full time and United had lost 1-0.

Even though Albion’s goal was a deflected shot United had more than enough chances in the game to win comfortably, including the penalty, but with a keeper in the form of his life it was never going to be the Red Devils day. 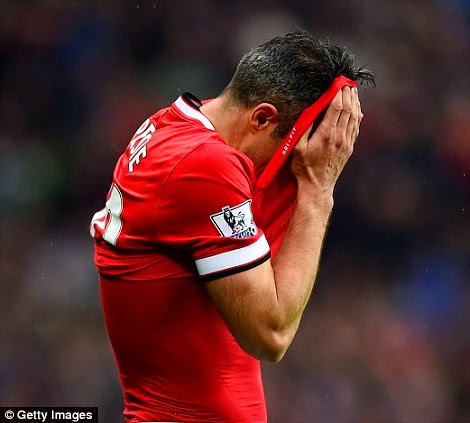 That’s three straight defeats in the league and it’s the first time that has happened to United in fourteen years.

Michael Carrick has been missed in the last three weeks, but the point is that United don’t really have the strength in depth to cope without key players something that has to be sorted out in the summer.
Are United bottling their pursuit of a top four place?  There are only three matches left so where will they get the much needed six points from?

Up next is a tricky away fixture to face Crystal Palace followed by a huge match at Old Trafford against Arsenal then lastly another hard away trip this time to take on Steve Bruce’s Hull City.

This is not turning out to be the way everybody saw the season ending when a few weeks ago we beat Liverpool, Spurs and Man City. At that time all looked well with United but this is football and a lot can change in an instant and it only takes a player like Myhill to produce a career defining performance to throw a spanner in the works.

I still feel that United will eventually end up in the top four as they have a four point cushion over Liverpool, but it’s typical of United to do it the hard way.

Written by Editor
Three is the magic number for United.
Away day blues for United.