Three is the magic number for United. 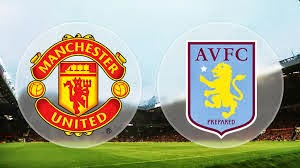 At last, after the International break it was a welcome return to the Premier League where the run-in for the final four places for Champions League qualification started in earnest.

Before the break, United had the wind behind them as they swept away Spurs and Liverpool to open a gap between themselves and sat in a promising looking fourth place. In their sights were Arsenal and Man City.

You had to wonder whether United’s  momentum would be slightly stalled due to the enforced break.
There was good news in that no player picked up an injury while away on duty, all except Chris Smalling, who had to leave the pitch playing for England due to an illness.

The last eight games will define United’s season and first up was the visit to Old Trafford of Aston Villa and their new manager Tim Sherwood.

The last time the teams played was at Villa Park in December, when a Falcao header rescued a point for a stuttering United against ten men Villa.

Louis van Gaal made one change to the starting eleven that defeated Liverpool and that was Rojo who replaced Smalling.

It was good to see that van Gaal continued to have faith in the players who have served him well over the last month.

Villa kicked the match off in the Old Trafford sunshine with United attacking the scoreboard end on a pitch that looked perfect for the match ahead.

As expected, former Villan Ashley Young was booed from his very first touch by the away fans, how long has it been since he left Villa?

It was Young who was first to try his luck with a run and shot that was blocked in the third minute.
60 seconds later United were denied a clear cut penalty as Rooney was held back in the box by defender Clark.

Fellaini received a through ball and played a nice little pass to the captain who was in on goal until he was hauled back by Clark. How that was not a penalty only the referee Roger East knows.

Villa went straight down the other end and nearly caused confusion in the United area which could have been worse before being cleared.

Fellaini started the match well proving that LvG’s assessment of him in the pre-match press conference was spot on. His performances had earned him an automatic starting place.

On 9 minutes there was a superb run by Young into the opposing area which created a scoring chance for Anfield hero Mata who was standing unmarked on the penalty spot. He side-footed a shot towards goal but it was blocked by the defence.

One minute later Mata himself had a run and cross which was cleared for a corner.

10 mins in and it was exciting attacking play from the Red Devils.

After 16 minutes Rooney chased a through ball but was adjudged to have fouled the defender on the edge of the box. If that was a free-kick then the earlier foul on Rooney was a clear cut penalty.

In the first 20 minutes, it was pleasing to see that the home side hadn’t lost the drive to attack that they showed before the enforced international break. They just needed to get that all important first goal.

Both Young and Mata were the live wires in United’s attack as they were involved in all of the approach play.

Then out of the blue in the 23rd minute Marcos Rojo let fly from distance with a left foot thunderbolt which keeper Guzan managed to get his fingertips to and touched it over the crossbar, great strike and equally great save.

Villa did have their own spells of attacking play but lacked any threat to David de Gea’s goal.

In the 26th minute, Valencia crossed from the right into the path of Rooney then the captain tried the acrobatics with an overhead shot but unfortunately didn’t manage to connect properly with the ball. That would have been special.

On the half hour mark, the play had gone a little quiet as both teams failed to keep up the momentum of the first twenty minutes.

Play was held up ten minutes before half time for attention to an injury to Villa’s Hutton, this gave a chance for United to receive instructions from the sidelines as to how to break down the resolute Villa defence.

Following the delay in play Young fired over yet another wicked cross which Guzan managed to punch clear before any United player could get a touch on the ball.

Young again tried his luck after a nice ball from Carrick but once again it was blocked by the defence.

It did seem that Ashley Young was on a personal mission against his old side.

41 minutes on the clock and Daley Blind almost steered the ball low into the corner of the net however Guzan managed to save his deflected shot at the last second.

Then in the 43rd minute Old Trafford erupted as Young and Blind combined down the left to lay the ball into the path of Ander Herrera who smacked a low left-footed shot into the far corner of the goal. A fantastic strike which was cooly taken by the Spaniard.

The goal was exactly what United needed and their play fully deserved the lead.

Herrera followed the goal up with a fabulous crossfield pass to Young who in turn delivered the ball into the box where both Rooney and Rojo had chances to double the lead but failed to do so.

The first half ended with United only leading 1-0 as it should really have been more and it would have been if not for the Villa defence, the goalkeeper and the referee.

No changes were made by van Gaal at the start of the second half and as he strode down the touchline he looked distinctly pleased with how everything was going. Let’s hope he would still be smiling after ninety minutes.

United started the half as they had finished the first on the attack, as Fellaini managed to get his head to a cross, but couldn’t direct it on goal in front of the anticipating Stretford End.

On 48 minutes, Carrick was fouled near the edge of the box but the free kick was taken too quickly and from the clearance Villa counter attacked. If not for a miskick from Benteke they could have equalised.

All the more reason United needed a second goal quickly to give themselves some breathing space.
A few minutes later and there was Ashley Young with his trademark cut inside and right footed shot which was only slightly wide of the post. 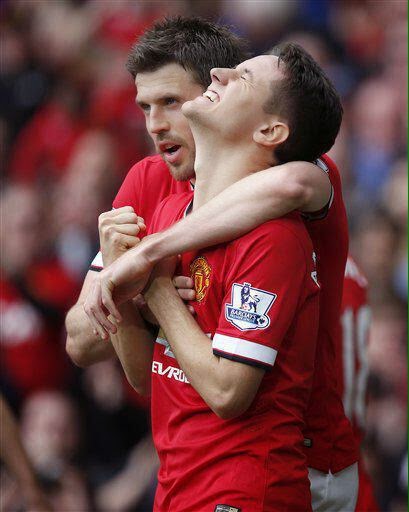 At the back, Phil Jones was enjoying one of his better games for a long while up against Benteke and was getting well and truly clattered in doing so.

In the 55th minute Rooney won a free-kick in a promising position which he left for Mata to take but the sun must have been in his eyes as the ball sailed harmlessly over the bar, that’s the excuse I would have given.

Just before the hour mark Young switched to the right wing to try his luck from there but hastily returned to his favoured left when a few exchanges between himself and Valencia didn’t come off.

Like the first half there was a period of ten minutes when the play from both sides fell flat but normal service was restored when Valencia sent over a delightful cross which Fellaini should have done better with as he tried to place his header downward rather than thump it home.

This seemed to bring the match back to life.

Old bad habits in United’s defence re-surfaced in the 66th minute as they played the ball agonisingly around the edge of their own area, which displeased the home support. We all know from past experiences what can happen when the team does that.

Two minutes later  Rooney almost doubled United’s lead with an effort using the outside of his boot which just flashed wide.

As the match entered the last twenty minutes you got feeling that fresh legs were needed and so it proved as Louis van Gaal made his first change of the day by taking off the hardworking Young and replacing him with Angel di Maria.

The Argentine had 20 mins to prove himself in front of the fans who dearly want him to be a success at Old Trafford.

On 71 minutes, Mata won a corner which was punched clear by the keeper straight into the path of Blind who had his sight on goal blocked by the referee.

A few minutes later, Rojo gave away a free kick on the edge of the area from which Okore almost managed to head in.

United’s second change came a minute later when Fellaini was replaced by Falcao, who like Di Maria, had a point to prove to the doubters in the ranks.

Then in the 78th minute Wayne Rooney produced a moment of brilliance that made it 2-0. He somehow managed to control a cross from Di Maria with his back to goal with his left foot and hit a half volley while spinning 180 degrees with his right that sailed into the roof of the net.

It was a truly fantastic strike and a wonderful assist from Di Maria, which takes his total to ten for the season.

The home fans celebrations were slightly muted as a minute later Benteke scored for Villa from a corner with a shot that squirmed under the body of De Gea to set up a nervy last 10 minutes.
In all honesty, I believe that is the first mistake David de Gea has made all season.

Di Maria broke away at speed in the 86th minute but, unfortunately, there was no teammate able to keep up with him so the move broke down.

Since the changes of players, United seemed to lose a little of the zest they had in the first hour of the match. Apart from a couple of corners they didn’t manage to trouble Villa that much.

Then in the 91st minute came the icing on the cake when Herrera scored his second and United’s third after fine approach play from Rooney and Mata.

The home side fully deserved their win and the quality of their play at times was reminiscent of days gone by. All three goals were of the highest calibre especially Rooney’s who now has another strike to add to his masterpiece collection.

Ander Herrera capped a man of the match display with his two excellent goals and together with his compatriot Mata are proving their value to the team’s progress up the table.

United worked hard for their three points and moved above Man City into third place, at least until Monday. After which the two teams will meet at Old Trafford next weekend in a match that now has more riding on it than local bragging rights.

The way United are gelling as a team I can see no reason why they can’t beat City and take one step closer to finishing above their noisy neighbours.

With only seven games remaining United stand in good stead and you get the feeling that the team are ready to end the season on a high.

Written by Editor
United soar over the Eagles.
United blow it against The Baggies.