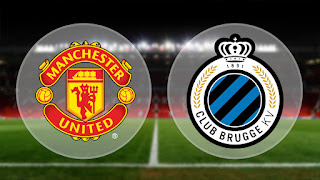 The Theatre of Dreams opened its curtains once more as it staged the return of the Champions League.

There is something special about European nights at Old Trafford, the atmosphere, the floodlights, the anticipation among the fans and not least the chance to see the best teams and players in Europe visit the famous stadium.

United welcomed Club Brugge for the first leg of their qualifying tie and it was the first time that United had faced the Belgian team in any competitive match. However, United’s first ever venture into the European Cup was against another Belgian side, Anderlecht, whom United beat 10-0 in the second leg at Old Trafford beginning their illustrious association with the competition.

The last time United found themselves in this position was exactly a decade ago when they beat Debrecen fc of Hungary 6-0 over two legs with the likes of Ronaldo, van Nistelrooy and Rooney leading the attack with the latter coming under criticism from many quarters this week after his below-par displays in United’s opening two games of this season. Here was a chance to prove the naysayers wrong.

There were many players making their United European debuts in the starting XI which was unchanged from the victory at Villa Park: Romero, Darmian, Smalling, Blind, Shaw, Carrick, Schneiderlin, Mata, Memphis, Januzaj and Rooney.

The only change was on the bench where Fellaini replaced McNair: Johnstone, Valencia, Schweinsteiger, Herrera, Fellaini, Young, Chicharito.

1st half: United kicked off the match attacking the old scoreboard end and immediately went on the attack with a superb through ball by Mata into the path of Januzaj who delivered a low cross which Rooney only just failed to meet. A great start by the Red Devils and by the fans who were in fine voice.

Rooney then found Memphis with a cross-field pass, but the young winger couldn’t make a clean connection. At the other end slight confusion in the home penalty area almost gifted Brugge a penalty thankfully the ref waved play on.

An exciting opening five minutes that even saw Chris Smalling create an attack by confidently running out of defence and passing the ball to the lively Rooney who crossed but too close to the keeper.

Then in the 8th minute an early blow for the home side as Brugge won a free-kick 30 yards out and when the ball was floated into the area Michael Carrick sliced his clearance into the back of the net giving the Belgians the all-important away goal. Januzaj has to also take partial blame as he could have blocked the ball but instead chose to turn his back to play.

After a great early start for United, that goal was a bad blow but there was plenty of time to bounce back.

And bounce back they did five minutes later when Memphis collected a ball from Carrick on the edge of the box and dribbled into the area after lifting the ball over Cools’ head, then he produced a low right-footed shot into the bottom corner of the net. What a fantastic first goal to start his United account with.

From that point on United applied the pressure with a succession of corners of which Rooney came agonisingly close to adding a second on two occasions.

Then just before the half hour Mata once again played a delightful through ball to Januzaj who went down in the box after being easily muscled off the ball but again the referee was having none of it. In fact, the German ref seemed to have a disliking for young Adnan as he reprimanded him like a teacher to a school kid.

United had a let off after the half-hour mark when Brugge attacked and a low Dierckx cross from the right thankfully eluded everyone in the penalty area, but it was a warning. Then United went up the other end with Memphis clear on goal but with only the keeper to beat, he inexplicably decided to square the ball across towards Mata but it didn’t reach the Spaniard, a wasted chance. Then the Dutch winger tried to make amends with a rasping drive from the edge of the box but the keeper punched it clear. 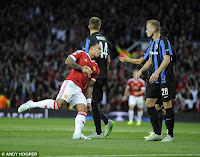 Then it became 2-1 to United after 43 minutes and it was the No.7 Memphis at it again with a superb thunderbolt from outside the area that left the keeper with no chance. A great strike and one that past No.7 legends would have been proud of.

Half Time: After falling behind to an unlucky own goal United took control of the game and really deserved to be ahead at half time. Memphis gave by far his best performance in the red of United and aided by the running of Januzaj, Mata and Rooney the attack looked to be clicking for the first time this season. The defence were also holding up well, however Brugge still posed a threat when attacking.

2nd half: In the second half United were hoping to score more goals at the Stretford End to make the tie more comfortable ahead of the return leg in Belgium next week. Louis van Gaal made only one change at half time by making his customary swap of Carrick for the German Schweinsteiger, who would add both steel and experience to the midfield.

United started the livelier of the two teams with both Mata and Memphis trying their luck on goal. Memphis almost completed his hat-trick after he was allowed to shoot from the same distance as his two goals but this time the keeper was more alert than his defenders.

Darmian collected the first United yellow card for a needless foul in the 50th minute and with the referee’s hardline he would have to tread carefully for the rest of the match.

After an hour it was all United as they totally controlled the game and were passing the ball around comfortably and at this point had achieved eleven shots to Brugge’s one but still needed to add to the score line.

Then it was squeeky bum time as Schneiderlin played a suicidal back pass to Romero, who was clipped by  Oulare as he tried a rushed clearance. Luckily no goal and no serious foot injury to Romero. After the treatment to Romero, Darmian tried to put things right by launching an attack and winning a corner.

In the next attack goal hero Memphis really should have added his third after a great cross from the right by Shaw which the winger tried to score with a spectacular volley when he had more time than he realised to slot the ball home. That was a great opportunity to put the tie to bed.

In the 66th minute, Schweinsteiger almost added his name to the scoresheet when he nearly converted a corner but the defence managed to clear.

In the 71st minute, the fans saw the return of Hernandez, after his season-long loan spell, return to action for United to replace Januzaj.

Memphis was desperate to get his third and he even tried his luck with a free-kick from distance which sailed wide but at least he was trying.

With 20 minutes left United became a little too anxious to add another goal and it took the likes of Schweinsteiger to calm the less experienced players down.

Brugge defender Mechele fouled Hernandez which earned him a second booking and a subsequent red so United would play the last ten minutes against ten men. This was followed by a caution for Smalling.

Louis van Gaal decided that it was time for the introduction of the  ‘unmarkable’ Fellaini as he replaced captain Rooney in the 83rd minute.

Fellaini immediately set about at making a nuisance of himself in attack as United tried to make use of his height in the penalty area and it almost worked as the Belgian planted a header just wide of the far post.

During the last five minutes, United threw everything at Brugge and Smalling almost delivered with a close range header that the keeper somehow managed to save.

Then in the 93rd minute with the last action of the game Fellaini delivered on his threat after converting a cross by Memphis to make it 3-1 with a header and make the tie a lot safer than it would have been one second before.

After missing out on the elite competition last season it was imperative that United didn’t slip up at the first hurdle and by winning they have taken a huge step towards the Champions League proper. It wasn’t just the win that was important, but the manner in which they achieved it with some breathtaking attacking football that had the crowd on its feet with almost every attack. It was like the United of old.

Brugge didn’t help their cause with the red card and will find it difficult to overcome the score line in Belgium but United still have to be wary of their forwards on their own ground. However, you would expect United to grab at least one away goal.

There were many performances of note from the home side, especially in the back four and Schneiderlin in midfield, who quietly and efficiently went about his job, but there was only one man of the match and that had to be Memphis Depay.

The opposition couldn’t deal with the mercurial winger as he was allowed so much room on the left to display his vast talents and apart from the excellent goals if his passes had had the same accuracy then his teammates would have benefitted more themselves. He rounded off an excellent night by providing the assist for Fellaini’s last minute goal.

United are back in Europe and back with a bang.

Written by Editor
Is LVG Right to Defend Ed Woodward?!
Is Januzaj Louis van Gaal’s Pick for the 10 Position?