Is Januzaj Louis van Gaal’s Pick for the 10 Position? 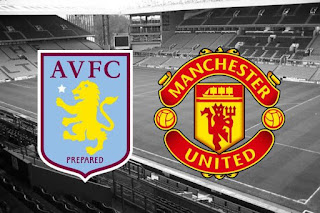 Over the last two decades, United’s record at Villa Park is an exemplary one to say the least as Aston Villa have not beaten the Old Trafford side at home in the Premier League since August 1995.

That was the infamous defeat that produced the quote ‘You can’t win anything with kids’. This time they did just that with the kid Januzaj winning the match.

It was up to Louis van Gaal to continue that record going as he took his new-look team to the midlands trying to add his first away win of the season to the opening home defeat of Spurs last weekend.

United enjoyed the perfect start to the season in the 1-0 win over Spurs, albeit by an own goal, as all five of the summer signings had a part to play in the victory with special mention going to Matteo Darmian who had an impressive home debut at right-back and goalkeeper Romero who made a string of saves in the final ten minutes that kept United ahead.

However, it was the performance in the middle of defence of Chris Smalling that stood out as he was a commanding figure playing alongside Daley Blind. The defence came under fire many times from all angles last season, but towards the end of that campaign Smalling raised his game and that continued last week and into this match. The hope among fans is that United will purchase an experienced partner for Smalling before the transfer window closes.

In his pre-match interview, Louis van Gaal declared a clean bill of health for his squad all except Phil Jones who was still suffering from thrombosis in his calf. David De Gea was deemed not to be in the right mindset for the match and the game proved to be too soon for defender Marcos Rojo.

The starting XI chosen by the manager had only one change from the side that featured last week and that was Adnan Januzaj would start in place of former Villan Ashley Young who would begin on the bench.

1st half: United, wearing their new white away kit, kicked off the game with Januzaj playing slightly behind Rooney in the number 10 position with Memphis taking over wing duties on the left.

The match started with many empty seats in the stadium due to the terrible motorway road works around the area, causing many fans to be late, but that didn’t seem to hamper the loud atmosphere.

United got into their stride after five minutes by neatly passing the ball around but without creating any chances. It was a cautious start to try and gain control of the proceedings. In the early exchanges, Januzaj was either knocked off or beaten to the ball far too easily which halted the attacks of the away side.

Former Man City defender Micah Richards wanted United to know he was back in the Premier League by clattering into Morgan Schneiderlin giving away a free-kick on the edge of the box in the 16th minute. The resulting free-kick was whipped over to the far post by Memphis and was met by Schneiderlin who couldn’t direct his header on target.

Two minutes later Memphis was almost through on goal but the Villa keeper Guzan reacted quickly to the danger.

Chris Smalling continued his fine form by reading the game at the back so well in the opening 20 minutes clearing all the balls that were played towards United’s penalty area.

After 25  minutes, the game was stuck at 0-0 with United on top, but with only half chances falling their way most of which fell to Memphis.

Then in the 29th minute came the opening goal following a great passing move by United that was started by Januzaj and ended with the ball at the young Belgian’s feet inside the penalty area after a superb through ball from Mata and as cool as you like he placed the ball into the net even though there were defenders all over the place. The ball took a slight deflection on the way, but it didn’t matter as that was a brilliantly worked goal.

1-0 to United and fully deserved as Villa had not produced any attack of note.

The home side did manage to get into United’s face after the goal, but the away defence stood firm and Smalling and his defensive colleagues mopped everything up. 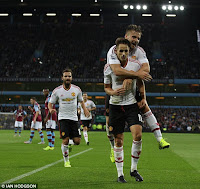 Half time and United were deserving of their slight lead, but in fairness the match was one sided and it’s was a shame United hadn’t been able to add to the score. Villa, for a side playing at home, were very poor and offered nothing in the way of a threat on Romero’s goal. United just needed to keep the possession as they had in the first 45 minutes and the game would be theirs for the taking.

2nd half: The game started with no changes made by van Gaal and with the away fans in fine voice as ever.

Villa had the first chance of the half, but Ayew fired well over without even troubling Romero when he really should have done better with the home side’s first real chance of the match.

United looked solid and were defending higher up the pitch to give Villa little chance of mounting any serious attacks and when they did the back four tidied up or Villa’s final passing was wasteful. Even their free-kicks amounted to nothing. 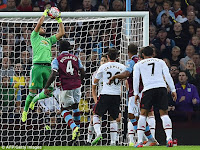 In the 54th minute, Agbonlahor planted a header from a corner goalwards but Romero showed good strong hands by catching the ball on the line. The home fans naturally started to get behind their side, urging them to attack which they started to do, but of course that left them open to United’s counter-attacks.

Then just before the hour mark Louis van Gaal decided to strengthen the side by making a double substitution as he brought on birthday boy Herrera and Schweinsteiger to replace scorer Januzaj and Carrick.

The plan seemed to work as United blunted Villa’s forward play from midfield and began once again to control the match. Herrera received an early present from Villa’s Amavi when he had a very late lunge on the Spaniard’s shins.

After 70 minutes United was playing some lovely football, especially the two amigos Herrera and Mata who were linking well down the right hand side add that to the work rate of Shaw and Memphis on the opposite wing and all that was needed was another goal to make the game safe.

Two minutes later Mata produced the pass of the match to put Memphis clean through, however, the forward put his effort wide when the whole ground was certain that he would score. It was a great chance for the winger to open his United account but more will come for the Dutch youngster with the pace he has.

77 minutes in and Herrera picked up the first yellow card for United after a foul out of frustration after he had been upended a few times himself and got nothing from the referee Mike Dean.

For the second match running Memphis was replaced in the last ten minutes this time by Ashley Young, who received his customary boos from the home crowd.  A like for like change on the left. The substitution was quickly followed by United’s second caution of the match for Darmian.

United tried their best to kill the game off during the final minutes but failed to do so and the game ended in a 1-0 victory for the Red Devils.

A solid professional performance and at times a bruising outing for Louis van Gaal’s side who never looked in any doubt to secure their first away win of the season and made it a positive start to the new campaign with a second successive victory.

To be fair Villa is a work in progress and they didn’t give United any cause for concern. It would have been great if United had cemented their superiority and added to the scoreline, having said that a win is a win plus another clean sheet is always a bonus.

There were a handful of players that stood out during the game Smalling, Darmian and Schneiderlin. However, the man of the match award has to go to Juan Mata as it was his vision that opened up the Villa defence time and time again and if the forwards had been on target from his assists then it would have been a higher winning goal margin. All the more reason van Gaal should strengthen the forward line with an out and out goalscorer.

The United squad is full of experienced internationals old and new who should be able to carry the team into the group stages of the competition that the Red Devils have won on three occasions.

There is no escaping United’s illustrious history in the competition and even the new signings will be swept along on the tide of support that comes whenever there is a European match at the Theatre of Dreams.