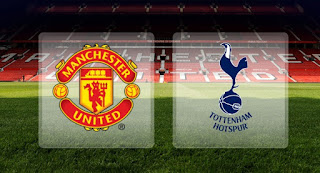 Well, here we are again at the start of another new season and what a match to kick off the new campaign, Spurs at Old Trafford.

This season promises to be an exciting one, to say the least, especially with the return of the Champions League to the Theatre of Dreams putting the club back on the European stage where it belongs.

Since the end of last season United, as usual, haven’t been out of the news having been linked to any player who can kick a ball, but Louis van Gaal kept his cards close to his chest and alongside Ed Woodward made come shrewd purchases during the transfer window and the club is set to continue with at least two more players earmarked by the manager.

The five new recruits to Old Trafford were Depay, Romero‬, ‎Darmian‬, Schneiderlin‬ and Schweinsteiger a mixture of experience along with new young blood has been added plus Hernandez returned to the United fold after his loan spell. The squad is still in need of a central defender and a striker, therefore the hope is that those positions will be filled as soon as possible.

The most exciting prospect seems to be Memphis who, after a promising pre-season tour of the States has been handed the iconic No.7 shirt and he seems a confident young player who will rise to the challenge.

There have been departures, of course the biggest of which has been the sale of our record transfer of last summer Angel Di Maria, whom we sold at a £15m loss to PSG along with the release of Falcao’s loan agreement after a disappointing season last year and last, but certainly not least, Robin van Persie moved to Fenerbahce in Turkey.

There was also the change in the strip sponsor with Nike ending their long association with United to be replaced by Adidas for a whopping £750m over the next decade.

Van Gaal had informed the press that due to his head not in being the right place David De Gea would not take any part in the season opener along with Marcos Rojo who had been deemed not match fit.

The line-up meant no places for Phil Jones, who had endured a difficult pre-season and Fellaini who is suspended. However, there was a return to the bench for Hernandez.

1st half highlights: A bright day greeted the teams along with the vocal home crowd at a packed Old Trafford as Spurs kicked off the new season facing the Stretford End.

The new players understandably took their time getting used to their new surroundings and playing in front of over 75,000 fans.

Spurs had the first chance of the game as early as the 5th minute as Eriksen lobbed Romero, but luckily the ball landed on the top of the Argentine keeper’s net. An early let-off for the home team.

In the opening 10 minutes, new Italian right-back Matteo Darmian was extremely lively down the right channel delivering crosses of high quality as he ventured forward at every chance.

There was some sloppy play by United in the 11th minute when Romero passed the ball to Schneiderlin in a dangerous position and the Frenchman was easily bundled off the ball but the Spurs attack could only produce a corner. Romero certainly looked a little nervous with his passing in the opening quarter. However, he quickly made amends with a fine blocking save.

The goal, United’s first shot, seemed to galvanise the side and they pressed hard for a second and in the 26th minute there was a bad foul on Mata right on the edge of the box. The crowd was shouting for Memphis to let fly, but Mata to tried his luck and he struck the ball straight at the wall.

Mata came close just after the half hour after a mistake in the Spurs defence allowed Rooney to play in the Spaniard, but after his first shot was blocked his second effort was pulled wide.

Half time summary: A few nervy performances from the side especially Romero and Schneiderlin, but as the match progressed they seemed to find their stride. Darmian and Memphis were the liveliest with Young enjoying a fine battle on the left with Walker. Spurs enjoyed the early possession, but the own goal put them on the back foot as United tried hard to find the valuable second goal.

2nd half Highlights: United started the second half unchanged and attacked the famous Stretford End. They seemed to be more composed as they passed the ball around with more confidence than the previous 45 minutes. They also seemed to trust one another more which bodes well for the season.

Memphis tried to get his eye on the target with an early long-range effort which sailed over. There was warm applause for Bastian Schweinsteiger as he began warming up along the touchline.

With the score at only 1-0 Spurs were still posing a threat but United’s defence seemed steadfast against Harry Kane & Co. Romero made a low save from a Spurs free-kick and seemed to have got rid of his earlier jitters.

Rooney came under attack up front as he received a knee in the back of the head which the referee ignored. 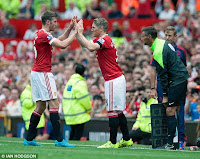 On the hour mark came the introduction of German World Cup winner Schweinsteiger making his home debut in place of Michael Carrick.

A good build up in the 64th minute involving Schweinsteiger, Rooney and Mata ended with a low drive from Young that was saved on the line by Vorm.

Since Schweinsteiger’s introduction, United had a more aggressive feel about their play in midfield which was summed up when the German received a yellow card after only being on the pitch for 9 minutes.

Herrera was brought on in the 68th minute for Memphis who enjoyed a fabulous ovation from the home faithful after running his socks off alongside Rooney.

Chris Smalling made an immense tackle to put a stop to Harry Kane running on goal. Great defending from the England international.

United were turning the screw as the match headed into the final twenty minutes and Rooney tried to replicate his stunning overhead bicycle derby goal but failed to make contact with the ball.
Another free-kick was awarded to United on the edge of the box this time Rooney was the culprit as he blasted the ball over the net.

Free kicks were a let down last season and the side don’t convert enough of these chances something they have to address this season. If he is on the pitch Memphis should be allowed to take them as last season he scored the most goals direct from dead ball situations in all of Europe.

Once again Chris Smalling was the last line of defence in another Spurs attack. Smalling was really proving to be pivotal at the back.

Darmian, who had produced a fine debut performance at right-back was replaced by Antonio Valencia in the 79th minute. The Italian has really settled into his defensive spot and is turning out to be a good bit of business by van Gaal.

In the last five minutes as Spurs pressed for the equaliser Romero made three smart stops the first from a low effort by Eriksen, the second a diving punch off the line and the third a fingertip away. Who needs David de Gea?

Match Summary: All in all a good result for United especially considering the side had five new signings involved as the team tried to get used to each other. It was a shame that no United player managed to score but with a new striker a possibility that won’t be a problem for long.

All credit to Spurs who tried their hardest to grab a point, but ran up against a defender on top of his game. Chris Smalling has to be considered as the man of the match after a towering display at center back alongside Blind. At times, you could have been forgiven if you thought Rio Ferdinand had returned so assured was Smalling.

Also, a special mention for Argentine keeper Romero, who kept the away side out at the death with a string of saves which proved his pedigree.

Three valuable points and next up for the reds is a first, a Friday evening away match in the midlands to take on Aston Villa.