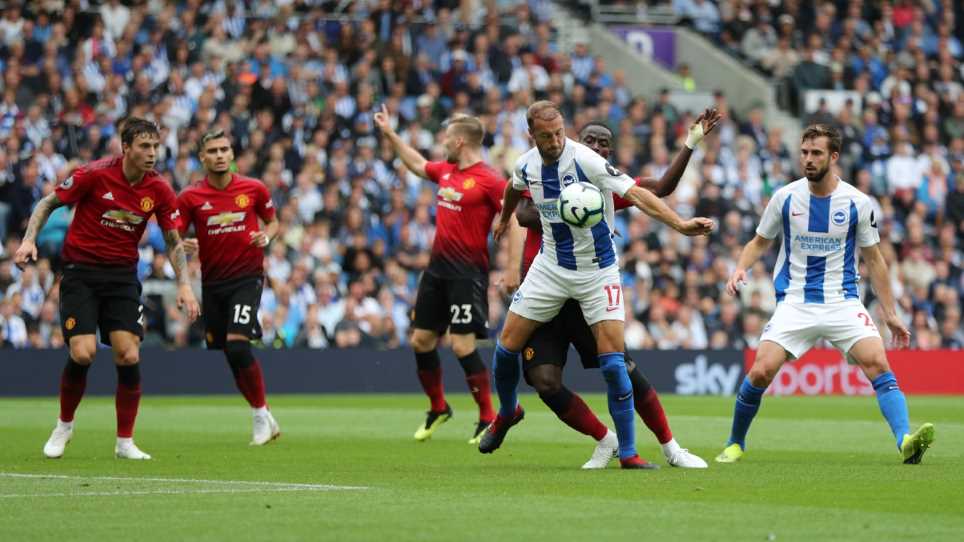 Yesterday Jose Mourinho side saw their first defeat in the English Premier League away against Brighton & Hove Albion.

The game has seen a significant decline in the performance of Manchester United and a disastrous form of the back four caused the team an important three points, we will try to delve into the details of that result:

During the first half of the game, Manchester United effort on the attack was very bad. The team showed no danger in front of the goal other than Lukaku goal.

The Red Devils suffered from the absence of valuable player like Alexis Sanchez who did not even travel with the team and Rashford who kept on the bench till half time.

The presence of the front trio, very slow Juan Mata, Lukaku who is been exhausted by his continuation in Russia World cup and un-confident Anthony Martial, bolstered the chances of Brighton defence to spoil the Red Devils’ attacks without showing any danger.

The game also saw many personal errors of Manchester United’s defensive line, which was a direct cause of two goals in two minutes for Brighton.

The first goal saw the worst positioning of duo Eric Bailey and Victor Lindelof with a complete absence of reverse coverage from Young and Shaw.

The second goal, which saw a huge players’ presence in Manchester United penalty area, caused the loss of focus and another goal in a tight time.

The third goal in the net of the Red Devils was a repeat of the positioning problem between the two center backs, after Bailey found himself forced to fix that mistake with a penalty.

The home team knew they would host a big team like Manchester United and they did their best preparation for the game and close all the spaces against united key players.

Brighton managed to isolate Lukaku even though he was not at his best, but the player was unable to show the usual danger due to tight marking & poor support from United middle. Even after the second half, Rashford, Lingard and Fellaini did not find a way to implement Jose Mourinho’s instructions to either play the ball quickly or deep long into Brighton’s defence.

NO SUPPORT FROM MAN UNITED MIDFIELDERS:

Manchester United suffered from the huge spaces in the back line, we talked about it in previous point because of the mismanagement and behavior of Lindelof and Eric Bailey,however, an important reason for the defensive’s fuss was that the three midfielders who started the game: Pereira, Fred and Pogba, all didn’t offer good support to the defence.

That was in many Brighton’ attacks, but the most important of all was the shot of the third goal just before the penalty kick, and the first goal shot in which Bailey found himself away from United defense area and Lindelof found himself alone in the penalty area.

Jose was helpless and clueless to face the hosts, without clear solutions to change the result.
Even with half time substitutions of Rashford & Lingard, the team has not change a lot. This forced Mourinho to switch to his usual plan B, bringing in Marouane Fellaini and play long balls (Same plan B for ex-United manager Luis van Gaal!). A step shows Jose lack of creativity & innovations. The home team was ready for it, and gave United no chance to play these out fashioned long balls.

Where is the problem? Jose, players or the management?