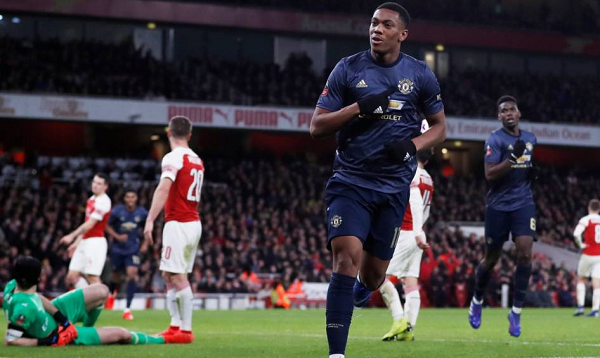 Former Arsenal Striker Alexis Sanchez made his return to Arsenal by scoring in the 3-1 win by Manchester United in the fourth-round of the FA Cup. The win now takes the for of Manchester United to 8 wins out of 8 games. Interim manager Ole Gunnar Solskjaer has arguably transformed the team to be now playing the best football since Alex Ferguson retired.

Since moving to Old Trafford last year, Alexis Sanchez has struggled to produce his best form but was took his chance excellently tonight to go round Petr Cech and score from a tight angle to give United a 31st-minute lead. When Sanchez moved from Arsenal to Manchester United, it was met with great optimism but the Chilean has largely struggled to find any form, tonight we seen a glimpse.

Romelu Lukaku also assisted in the second goal just two minutes later when he set up Jesse Lingard who scored with a simple finish. Arsenal did score shortly before the break but on the 81st minute Antony Martial finished excellently after a Paul Pogba shot could only be parried from Peter Cech.

Jermaine Jenas on Lukaku said: “Those assists in the first half helped shift the momentum Manchester United’s way. I was impressed by his application and attitude on the right-hand side.”

Fans will be hoping we can continue this fine form when we face Burnley in the Premier League. Interim manager Ole Gunnar Solskjaer is doing everything possible to be offered the full-time position come the end of the season. The other option is current Tottenham Hotspur manager Mauricio Pochettino, only time will tell but what a great start to 2019.