Ole Gunnar Solskjaer has been welcomed as a savior after arriving at the Old Trafford last season. A year after that, he is experiencing similar pressure as his predecessor, Jose Mourinho.

High expectations of both the club’s management and the fans are not met, and the Norwegian manager is facing a lot of difficulties right now. Compared to his beginning here, the situation is now totally the opposite.

While he was a caretaker manager, United was playing extremely well, posting 14 wins in 19 matches, along with two draws and just three defeats. They would go on and eliminate PSG in an epic rematch of the Round of 16 in Paris, making one of the biggest surprises of the competition.

However, since he signed a contract with the Red Devils, the stats have deteriorated. United win 13 times, in 33 matches, and has 11 defeats and 9 draws. At the moment, they are the fifth favorite to win the title, but the odds for actually doing that are more than slim. United is at 500/1 to take the Premier League, the same as Tottenham Hotspur. Chelsea sits at 250/1, while the top three contenders go in this order, Leicester 14/1, Manchester City 7/1, and Liverpool as the No.1 candidate at 1/7. By following this link, you can get more Premier League betting offers from all the best UK bookmakers.

The fans are aware that the EPL trophy is out of reach this year, and they already started focusing on other goals, such as finishing on the place which leads to the Champions League, or at least among the top six spots which would probably secure the Europa League at least.

It is not what they planned, but it is better than to miss the international challenges, which can be very interesting. They’ve learned in the past that the Europa League might be a competition with a superb reward in the end. Back in 2018, when United won the EL, they’ve got the place in the Champions League, and we saw that it played a huge role among English clubs last year once Chelsea and Arsenal met in the finals.

United’s chances to secure one of the first four places aren’t that promising. Right now, the Red Devils sit at 4/1. Two big rivals Chelsea 4/6 and Tottenham 2/1, are ahead of Solskjaer’s guys, while Arsenal looks in their back with 12/1 odds.

When talking about the top 6 places, the situation is much brighter for the three-time European champions. Bookies expect to see them in that zone, which is why the odds are not high, as in the previous cases, 8/15. Tottenham is 1/5, Arsenal 9/4, while Wolves appear as one of the teams in the combination 10/3.

To summarize, United has realistic chances of finishing among the first six positions in the standings, but them catching one of the top four spots is tough to happen. It is more likely that they chase the Champions League spot through Europa League. Solskjaer’s guys are the No.1 favorite there with 6/1, ahead of Seville and Arsenal with 7/1 and Inter Milan, who is at 9/1.

It would be a nice way for the current manager to strengthen his position in the club, and remove some pressure off his and the players back. 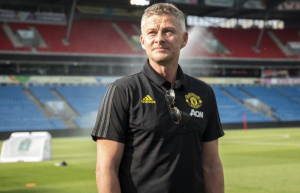