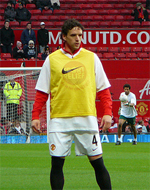 Owen Hargreaves told Manchester United fans that he is recovering well from his injury and looking to be back to action very soon. The former Bayern Munich star felt the injury in his knee at the end of the season. It was the same injury which kept him out of action at the start of last season.

Hargreaves, who will not appear in next England friendly game against Czech Republic, is hungry to play and help United to win more trophies, however Sir Alex thinks Hargreaves should take it easy as United are preparing to win next game against Portsmouth.

“I am working on my fitness every day and while I have not joined in with the lads yet, hopefully it will happen this week.

“Whether I am fit for Portsmouth or the match after that, the most important thing is I am healthy for the rest of the season.”

Meanwhile, Manchester United won against Chelsea 1-0, a friendly game between both clubs reserves teams. Danny Drinkwater scored the only goal for United on 59 minutes. Also United skipper Gary Neville has started the game with Ben Foster returning to action after an injury he has during the first team trip to Africa.